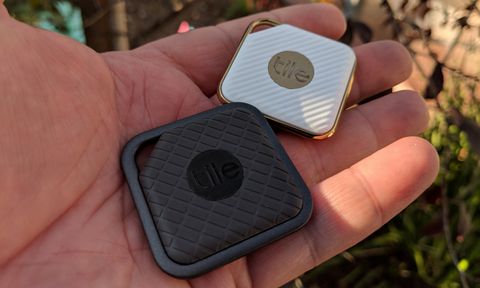 Part of Tile's new Pro Series of key finders, the Tile Sport and Tile Style offer pleasing designs and improved hardware that put them ahead of all rival tracking devices.

Tile manages to keep finding ways to improve on its wireless key finders. The Tile Pro Series introduces two attractive new designs for a tracker that has better range and a louder alarm than the still-worthwhile Tile Mate. At $35, the new Tile Pro trackers also cost $10 more than the Mate, but the new additions justify the higher price.

The Pro Series just became a better value if you're a Comcast customer. The cable and internet giant now has a partnership with Tile that allows subscribers with an Xfinity X1 Voice Remote to search for their lost items. Speaking into the remote, you can ask to find your keys (or whatever object you've attached the Tile Sport or Style to), and the last known location will appear on your TV. Comcast says the feature will expand to all Xfinity internet customers later this year.

The Pro Series offers two choices: the Tile Sport and the Tile Style. I prefer the Sport's slicker look, with its two shades of black and its checkerboard pattern. But the Style's white-with-gold-band design will certainly please anyone with a more refined aesthetic, and it'll look right at home on a purse or keychain. Whichever look you prefer, there's no denying that both Pro models offer a bit more style than the austere Tile Mate.

Looks aren't the only improvement over Tile's $25 key finder. Both the Sport and the Style include IP68 water resistance, meaning they can survive in 1.5 meters of water for 30 minutes. The Tile Mate can survive splashes, but you can't dunk it in water.

Tile also boosted the range of its Pro Series to 200 feet. For comparison, Tile says the Mate tops out at 100 feet, but we found that it loses connectivity long before that. Both the Sport and the Style also can signal a louder alert — a feature you can access via Tile's companion app for Android and iOS.

I noted both improved range and louder volume when I put the Tile Sport and Style through their paces, with the latter feature proving particularly useful for finding lost items.

How the Tile Sport and Tile Style Perform

I noted both improved range and louder volume when I put the Tile Sport and Style through their paces, with the latter feature proving particularly useful for finding lost items. Burying the Sport and Style under a very sizable pile of laundry — who has time to wash clothes when there are key finders to test? — I could pick up the faint alarm of Tile's signals as I buzzed them from my iPhone using the maximum volume. For comparison, the Chipolo Plus made a more detectable noise from under Mount Laundry, but the Sport and Style were definitely more audible than the Mate.

I appreciated the loudness of the Sport and Style even more when I moved my testing to a pretty busy public park. Standing anywhere from 70 to 80 feet away from the new Tiles, I could still hear them faintly through the park's ambient noise. The Mate's alarm became pretty hard to hear after I moved 50 to 60 feet away.

You'll need that louder volume, because both the Sport and the Style came pretty close to delivering on that 200-foot range that Tile promises. Leaving the two new Tile trackers behind on a park bench, I could maintain a connection between them and my phone at up to 150 feet away — and, in some cases, even farther. I once managed to stand 180 feet away from the Tile Sport before I lost its signal.

There's an argument to be made for just how valuable that kind of range can be: The farther you are from your keys and the fainter that alarm sounds, the harder it will be to track down where you left that misplaced valuable. At least the Sport and Style do a good job of reconnecting with your phone once you stumble back into range. Usually, the key finder and my phone reconnected within 20 to 30 feet of losing touch with each other.

The Tile Pro Series retains the two-way find feature that Tile added to its trackers a couple of years ago. If you press the Tile logo in the center of the tracker, your phone will ring (quite loudly), thus helping you to pinpoint where you left that device.

As with other Tiles, the Sport and Style lack a geofence feature that sends notifications to your phone should you and your keys become separated — a missing capability I have mixed feelings about. On one hand, warnings that you're about to leave something valuable behind can save you some frantic searching later; on the other, the key finders that do offer a geofence feature usually suffer from inconsistent performance and annoying false positives. Tile clearly would rather do a geofence feature right or not at all, so it's understandable, if disappointing, not to see that capability in this version.

Like other Tile trackers, the Sport and Style have a nonreplaceable batteries. For many users, that's a deal killer, and it's easy to understand why. The ability to replace a battery on your own is much more convenient, and it ensures a long life span for your key tracker instead of turning it into a hunk of useless plastic and circuitry after a year's worth of use.

At least Tile has a good battery-replacement program in place. Under the company's reTile program, you can buy a replacement at a reduced cost ($15 for the Mate, $25 for the Sport or Style). This lets you take advantage of any new hardware features Tile adds, and Tile lets you send your old device back to be recycled. After testing Tile trackers for two years, I've found the key trackers generally deliver the year's worth of battery life that Tile promises, and the app alerts you when it's time to replace your device.

The inability to replace the battery is a mark against Tile's trackers, but I think the company does a pretty good job of addressing that drawback.

Tile has consistently produced the best key finders in our testing, and the new Tile Pro Series continues that trend, with improved range and a better alarm. You can save $10 by opting for the less expensive and perfectly capable Tile Mate, but the hardware improvements to both the Tile Sport and the Tile Style make them the best options for keeping track of your keys.