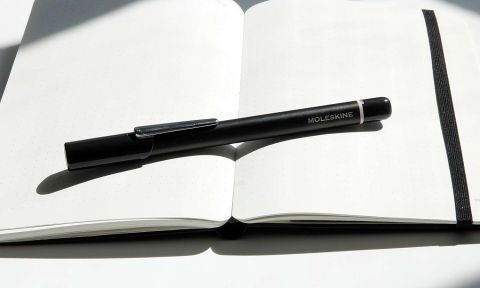 The Moleskine Smart Writing Set has everything you need to digitize your writing, but you're limited to one size notebook and need your smartphone for voice notes.

I have an affinity for Moleskine notebooks. Sure, they're on the expensive side, but I love the way they feel. The company is going high-tech by joining the smartpen game with a $199 set, including the Pen+ smartpen and Paper Tablet (a fancy name for a notebook with proprietary paper).

There's also an app for your iPhone. Written notes are sent to the app and can be accessed anywhere, edited and shared. It's more expensive than the $149.95 Livescribe, though — students and professionals will have to decide if a premium experience is worth the extra cost when it doesn't do anything that changes the game.

The Pen+ included with the Moleskine Smart Writing Set isn't actually new technology. It's a rebranded version of Neo Smartpen's N2, a former Kickstarter project. It's not a bad choice; the 6-inch, 0.96-ounce Neo feels more like an ordinary pen (cap and all) than the chunkier Livescribe 3 Black Edition (6.25 inches, 1.1 ounces). If you're just switching to a smartpen from a traditional ink pen, this will feel normal.

The black aluminum pen has a slightly triangular design that's comfortable to use for writing. In fact, the experience is a little smoother than using a regular ballpoint pen. A colleague of mine who has professed to being a "pen snob" liked the pen's weight distribution and how smoothly it glided across the page, though he thought it looked ridiculous. (I disagree with him.)

A silver-plastic clip on the cap is great for hooking the pen to papers or pockets, and both Moleskine and Neo's logos adorn its casing. Underneath the ink cartridge is an infrared camera that scans the proprietary paper to send what you scribble to an app for digitizing.

A micro-USB port on the end of the pen and included cable charge the device. An indicator light lets you know whether it's charging, has low battery or has a full charge and is connected to a phone. If you fit the cap on the back of the pen while you write, it may cover the indicator unless you position it exactly the right way, which seems to defeat the purpose.

The 90.6MB of onboard storage stores what you write until you sync it with a phone or tablet, which frees up the space again. Moleskine claims that this is enough to store up to 1,000 note pages.

There are two ways to turn the pen on: by using a button on the side, or by starting to write. I would advise using the button, as the pen cut off the beginnings of words when it hadn't turned on as I started writing.

Don't be fooled by the name Paper Tablet — the 176-page pad that comes with the Smart Writing Set is a Moleskine notebook. It comes with all of the trappings you would expect from the brand, including the premium hard cover, the elastic bookmark and a pocket in the back for business cards or receipts. The pages are rounded and protrude from the cover. The company says this is an attempt to make the notebook look like a tablet. But if you've used one Moleskine, you've used this one.

The paper is 8.25 x 5 inches, so the Paper Tablet is way too big to fit in a pocket; you'll either be carrying it in your hand or lugging it around in a bag. Moleskine suggested to me that new sizes may come in the future but made no guarantees about when.

Like the Livescribe 3's Dot Paper, Moleskine's Paper Tablet uses proprietary dot patterns that the pen recognizes and scans. Each sheet features an envelope icon for easy sharing over email. Tapping the page with the app open will bring up an email with a PDF ready to send. It will not be an editable PDF.

When you eventually run out of space in the notebook, you'll need to buy more to keep using the pen and app. Moleskine is selling additional Paper Tablets for $29.95 each. Livescribe sells six 75-sheet pads for its pen for $12.95, so you're paying a serious premium for the Moleskine name and build quality.

If you're looking into the Smart Writing Set exclusively to use Moleskine's notebooks, you have more choice than you think. The company makes journals using Livescribe's proprietary paper for the same $29.95 price, which gives you access to Livescribe's other pads, sticky notes and more.

The pen is bundled with two black ink cartridges — one preinstalled and a replacement for when the first runs dry. Moleskine doesn't sell refills directly, and didn't share any plans to do so in the future. I found a box of 10 Zebra ink refills on Amazon — the same ones that come with the pen — for $9.99, but any 0.7-millimeter ballpoint-pen refill should do the trick.

At the moment, the free M+ Notes app works only on iOS devices, though Moleskine promises that an Android version is on the way. The app syncs to the pen over Bluetooth and collects everything that you have written in the Paper Tablet. If you have the app open while you write, you can see it transfer to the app almost immediately, which is kind of surreal.

You can flip through your notebook page by page and use a tagging system to organize digital notes. A fairly robust editing tool lets you add color to your scribbles and adjust the thickness of your writing before sharing them with others. The app will autosync with Evernote, or you can share to Google Drive, Apple's Notes app, email and more. You can also convert notes into text, SVG files, PDFs or image files. These options are similar (though more robust) to what Livescribe 3 offers (Evernote, OneNote and emailed PDFs).

The app attempts to transcribe your handwriting into shareable text. I say "attempt," because this will depend heavily on how well the app can interpret your handwriting. Just as with Livescribe, there is no way to train the pen to understand your chicken scratch. My scribbles are only slightly more legible than what you would find on a prescription from your doctor, so I have to give it credit for doing fairly well. On a shopping list, "steaks" was turned into "steals," while a task to write "thank-you notes" on a to-do list was turned into "that you notes." Overall, I was able to make sense of my transcriptions, even if they weren't completely correct.

I wrote three identical phrases with the Livescribe and Moleskine pens — "The quick brown fox jumped over the lazy dog," "She sells seashells by the seashore," and "One fish, two fish, red fish, blue fish" — to see how they were transcribed. The Moleskine Pen+ missed a capital letter, mistook one "f" for an "r" and placed a period where a comma should have been. The Livescribe had only one error, mistaking a "z" for a "t."

Moleskin's M+ Notes also has a feature similar to Livescribe's pencasts that records audio as you take notes. When you play it back later, it shows what you wrote. Unfortunately, as with the Livescribe 3, you need the app open on your phone in order to record. There is no microphone on the pen, so your audio quality will depend heavily on the environment and the device you use. Small group meetings may work well, but you're unlikely to capture audio from the back of a large college lecture hall on your iPhone.

Unlike Livescribe's paper, Moleskine's pad doesn't have touchable shortcuts to activate features in the app (with the exception of quick emailing), which left me digging through menus at the beginning of a meeting.

Additionally, the app often took several seconds longer to sync with the pen than the Livescribe did. Having to manually match up the contents of the notebook with the app was an additional, annoying step.

It took me a little less than 2 hours to fully charge the Pen+ out of the box, and it lasted through the remainder of the workday under heavy use and constant app syncing with 40 percent of its battery left. On my second day, the battery indicator started blinking red — a warning that I would need to charge the Pen+ soon.

Under more conservative use, the battery would likely last a couple of days between charges. Moleskine promises 5 hours of endurance for continuous writing, or 125 days in standby mode. Livescribe promises 14 hours of continuous use, though we used the Black Edition smartpen on and off for about half a week on a single charge.

Although the battery indicator light blinks red if it is about to die, you can see what percentage is left at any time by clicking on the pen icon in the app.

The $199 Moleskine Smart Writing Set has everything you need to start digitizing your notes, as long as you don't mind using a very specific Moleskine notebook. The pen is comfortable to use — it's moregraceful than the Livescribe 3 Black Edition — and the notebook is just like any other Moleskine, which is great if you like the brand. The app's editing and sharing features are useful and easy to use.

The Pen+ and Paper Tablet don't do anything dramatically different from Livescribe, with the exception of the adjustment option, and the app could be easier to sync with the pen. You'll pay a premium, as the $200 set is $50 more than the Livescribe 3 Black Edition. And if you wanted to, for $29.95, you could even buy a Moleskine notebook that works with the Livescribe.

This smartpen and pad set doesn't make any huge changes to what already exists on the market, but it makes a few refinements in exchange for the cost. Students and professionals who see value in adding some color and a ton of sharing formats or who want a pen that doesn't scream "technology!" should consider the Pen+ and Paper Tablet.