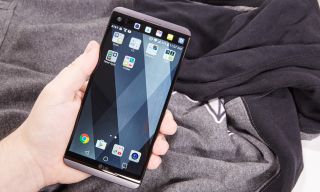 LG is preparing to announce its next flagship Android handset just a day ahead of IFA next month.

The Korean tech giant just announced plans to hold a press event in Berlin, Germany on Thursday, August 31. The event, which will be held at 9 a.m. local time, is believed to play host to the company's unveiling of a new flagship handset, the V30. Tom's Guide has gotten its invite, and we'll be on hand in Berlin to cover whatever LG plans to announce.

LG didn't actually confirm what it will be unveiling at the event. However, rumors have been swirling for weeks that LG is working on a new flagship that will be known as the V30, a follow-up to last year's LG V20. The smartphone is also rumored to surface around the time of IFA. Add that to the invite's prominent "V" inside a smartphone-like silhouette, and it's nearly a guarantee that the V30 will show up at the event.

The V30 is expected to come with an OLED screen rather than the LED displays that LG has used since 2015. Additionally, there's a good chance that it'll have two screens. LG's V line has been promoted as a two-screen handset as a way to differentiate it, and the LG V30 isn't expected to veer from that.

This being a high-end handset, it's expected that the LG V30 will come with a top-notch processor such as the Qualcomm Snapdragon 835. It'll also run on Android.

It's unknown exactly when the LG V30 will launch and how much it will cost. But at least now we know the wait will soon be over.