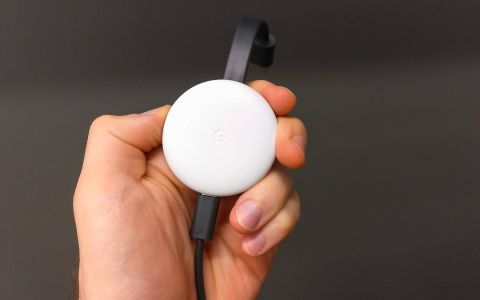 The new Google Chromecast is fast and intuitive, but the attractive little dongle is behind the times.

UPDATE, 11/5/19: The Chromecast still works well for 1080p TV sets, but those looking for fancier 4K options would do well to check out our best streaming devices page.

Google doesn't seem to be making a big deal about the new Chromecast, and now that I've tested the product, it's pretty easy to see why. Still one of the best streaming devices, this model is nearly identical to the second-gen Google Chromecast model from 2015, only it's a little faster. The new Chromecast has also lost a very handy physical feature, and it has almost nothing to show to reflect three years of hardware advancement in the streaming space.

If you've got a 1080p TV kicking around in your kitchen or guest room, and the set doesn't have smart features built-in, the Chromecast is still one of the best Google Home compatible devices for inexpensively watching Netflix, Hulu, et al. on a big screen. Otherwise, Google's attractive little dongle is behind the times.

As before, the Chromecast is a circular dongle with a 2-inch circumference that attaches to the back of your TV. But now, instead of coming in a collection of vibrant colors with a cool, spiral design on the front, it comes in your choice of plain, boring black or plain, boring white. (It sports a rather tasteful little "G" logo, either way.)

On one side, there's a built-in HDMI cable, while the other hosts a micro USB port for power. (The Chromecast comes with both a micro USB cable and a power adapter, although you probably won't need the latter, unless you have a very, very old, USB-less TV.) There's also a button you can press for a hard reboot, although I never needed this.

Because the Chromecast lives behind your TV, its physical design isn't all that important. But the device's latest edition did lose one of my favorite features: a small magnet on the HDMI cable that let you tuck the device neatly against itself. Now, the Chromecast dangles helplessly. This is probably not a big deal, although I wonder if gravity will stress the HDMI cable over time.

The best reason to buy the Chromecast, as always, is that it has the simplest, easiest-to-understand interface of any streaming device on the market. That's because the Chromecast doesn't require you to learn a whole new OS or play around with an idiosyncratic remote control. Instead, you control the entire experience from your phone, tablet or computer.

By installing the Google Home app on your mobile device or by clicking the Cast option in a computer-based Chrome browser, you can simply "cast" whatever content you're watching onto your TV. This isn't a form of screen-mirroring. Instead, your phone is simply instructing the Chromecast to go pick up a signal directly from the content provider (Netflix, for example). This may seem like a subtle point, but true screen-mirroring requires daisy-chaining devices together and often results in a subpar experience.

Controlling the Chromecast is as easy as any given app makes it. For example, in Netflix, all you have to do is open the content you want to watch, press the Cast button and wait for your media to appear on your TV. From there, you can pause, play, fast-forward, rewind and adjust volume via your phone. The process is just as straightforward now as it was when the Chromecast debuted, but it's also quite a bit faster now.

The only significant difference that Google advertises between the third-gen Chromecast and its second-gen predecessor is better hardware. This is supposed to make the new gadget up to 15 percent faster than the old one.

Because 15 percent is not a night-and-day increase, and because the old device wasn't slow to begin with, this is not easy to test. So, I tried to evaluate the difference using a stopwatch, a general sense of of what HD vs. SD resolutions look like, and a collection of videos on Netflix, Hulu and YouTube.

It's a little bit harder to pinpoint resolution on YouTube, because a lot of content comes courtesy of phone cameras shooting under less-than-ideal lighting conditions. But videos from this service took 12 seconds to start on a second-gen Chromecast and 9 seconds to start on a third-gen version. That's a difference of 25 percent, still in excess of Google's claims.

If anything, Google undersold how much faster the new Chromecast is. But it's also worth pointing out that the very greatest difference I observed between the two models was 6 seconds. If you were to stream one video per day, that'd cost you about 37 minutes over the course of a whole year — almost enough time for an extra prime-time drama but not that much in the grand scheme of things

Although this is harder to quantify, colors also looked a little richer on the third-gen Chromecast, particularly the deep blacks and otherworldly blues in sci-fi films like Star Trek Beyond.

Of course, the color on the Chromecast isn't anywhere close to what you'd get with a 4K HDR device — which is, honestly, the route I was expecting Google would go. The Chromecast Ultra ($70/£69) supports 4K HDR content, but that device's power-consumption specs make setup inconvenient. It's also now a bit expensive in comparison to other 4K HDR devices, like the Roku Premiere ($40, or £60 for the closest specced model available in the UK).

In fact, the Chromecast's 1080p output is arguably its biggest weakness. While 1080p TVs still make up the majority of sets worldwide, their reign could come to an end as early as next year. If you just bought a brand-new 4K smart TV, there's no reason to get a third-gen Chromecast for that set — and even if you didn't, it's better to spend the extra $5-$35 on something a little more future-proof.

Using the Google Home app, you can search for content across a few dozen apps, including heavy hitters like Netflix, Hulu, YouTube and Vudu. The app does a pretty good job of directing you toward apps you already have installed on your phone or tablet. Google Home hardly approaches the subtlety of an Apple TV search (which can find movies based on Rotten Tomatoes ratings or TV shows based on a single, obscure guest star) or the breadth of a Roku search (which blazes through hundreds of different content providers). But it'll get the job done for ordinary TV and movies.

On April 18, Amazon and Google announced that Amazon Video support would be coming to Chromecast in "the coming months," ending a year-plus spat that left users forced to use a tedious work-around using the screen-casting feature and enough bandwidth for screen mirroring.

One nice thing about Chromecast is that Google's audiovisual apps have casting functionality built right in. If you want to display your Google Photos on a TV, listen to your Google Play Music, or show off your library of Google Play Movies and TV, all you have to do is open the app and press the Cast button. Most other streaming devices offer similar functionality, but there's usually a bit of tedious media-server setup involved. However, Google Play Music won't let you cast music from your personal collection — just stuff you've purchased through Google.

The new Chromecast is a divisive streaming gadget. It's easy to like it for the intuitive interface and wide variety of content, and the speed improvement is noticeable. However, the new Chromecast doesn't innovate in any real way.

Overall, the latest Chromecast feels behind the times, and it's lost one good feature along the way. But for $35/£30, it's still a very capable 1080p streaming gadget. Pick it up if you like the interface and have a full-HD TV that needs some love. Otherwise, your money is better spent on a 4K HDR device like the $40 Roku Premiere, which will provide better picture quality for a longer period.