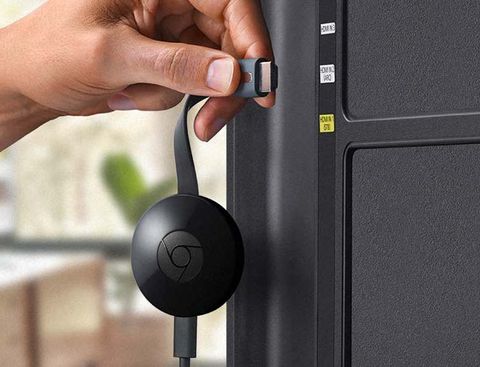 The Chromecast Ultra fits the bill if you want beautiful visuals at a low price, but nagging design and interface issues hold it back.

In "Up the Long Ladder," an otherwise very forgettable episode of Star Trek: The Next Generation, a guest star informs Mr. Worf that "Every moment of pleasure in life has to be purchased by an equal amount of pain." Nowhere is this adage truer than in streaming media players.

The Google Chromecast Ultra ($70) may sound like the perfect device on paper: a small, powerful 4K player that works with your existing setup and costs considerably less than $100. Dig a little deeper, though, and you'll find significant shortcomings in its design, functionality and channel selection. The Chromecast Ultra fits the bill if you want beautiful visuals without breaking the bank, but you'll have to be willing to put up with a few petty annoyances to get there.

Although I was lukewarm on the way the first Chromecast looked (as well as just about everything else about it), I was a big fan of the redesign. The Chromecast Ultra resembles its 1080p counterpart in that it's a circular USB dongle that can attach magnetically to its own HDMI connector. Hiding it behind a TV is very simple, although if you can't, it's an attractive enough device. (Sadly, the Chromecast Ultra doesn't come in the cool red or yellow options of its less sophisticated cousin.)

The Chromecast Ultra is a bit bigger than the 1080p Chromecast: 2.3 inches in diameter, rather than 2.0 inches. (The Roku Stick, one of the Chromecast’s closest competitors, is 3.3 x 0.8 inches, for comparison.) The size isn't much of a problem, but the power source is. Unlike the smaller Chromecast, which can draw power from a TV's USB port, the Chromecast Ultra requires a constant connection to an outlet in order to function. If your entertainment center's surge protector is already full, get ready to play musical wires, or else run an extension cord. (Which I did, and nearly tripped over it a few times).

Not only is the adapter itself very large, but the cord is not nearly long enough: just about 5.5 feet. If your TV's HDMI ports are on the opposite side of the closest power supply, you have my sympathies. At least the large adapter lets you plug in an Ethernet cord. You may need it to get the full 4K experience, depending on the strength of your wireless connection.

The Chromecast Ultra is pretty, but its setup and functionality feel clunky compared with the 1080p Chromecast. Perhaps there was no way around this, given how much power a 4K machine needs to draw, but then why not simply make a small box instead of a dongle? It's a mismatch of form and function.

The best interface is no interface. So sayeth Google, which designed the Chromecast with a nearly invisible operating system. Rather than navigate through a series of menus, like on a Roku, an Amazon Fire TV or an Apple TV, the Chromecast simply takes cues from your mobile device or computer, then handles the rest on its own.

The way it works is remarkably simple. Just download the Google Home app on your iOS or Android device, or the Google Cast Extension in the Chrome browser. The Google Home app will give you a list of compatible apps, which you can then download from the Google Play Store or iTunes. Each app will now have a "cast" button built-in, which streams content to your TV. The process is pretty similar for computers, except you'll visit websites instead of opening apps. There's a partial list of compatible programs on Google's Chromecast site.

The beauty of the Chromecast is that your phone is not actually doing any of the legwork. You aren’t broadcasting Netflix directly from your phone to your TV. Rather, the Chromecast app sends a signal to the device, which handles the rest on its own. You're free to use your phone as normal while your shows and music stream in addition to controlling volume, rewinding, fast-forwarding, pausing, skipping tracks and all the other things you'd expect a remote to do. The battery drain on a device is minimal, and the functionality is intuitive for anyone who's ever used a smartphone before.

On the other hand, relying on your phone or computer to control everything means that you'll have to deal with minor annoying errors on a fairly regular basis. While the Chromecast Ultra always responded promptly the first time I wanted to watch something, it would often just stop working if I tried to switch to a new app without stopping the first one. This happened whether I was using my phone (a Motorola Moto X), my tablet (a Google Nexus 10) or my laptop (an ancient Lenovo), so it appears to be endemic to the Chromecast rather than the controlling device.

After watching a show for a long period without using my phone, my controls would sometimes disappear. While installing a software update, my phone said that the device had stopped responding, when in fact, it was working just fine and ready to accept new commands.

These oddities are hard to avoid when you've made a protocol that has to interact with dozens, if not hundreds, of slightly different phone and computer operating systems, but Chromecast has been grappling with these problems since its very first iteration, and while they're getting better, I don't know if they'll ever fully go away.

Finally, using your phone as a remote means that you are relying on a device that sees heavy usage with limited battery life. A conventional remote control on a set of AA batteries might last for years; you're lucky if your phone lasts for 8 hours. Plugging it in is a minor annoyance, in the grand scheme of things, but both my phone and tablet ran out of juice while I was watching Netflix, and I couldn't even pause my show while looking for their chargers. It's a First World problem, but a problem nonetheless.

It's surprisingly difficult to get an accurate estimate for the number of Chromecast apps available. This is partially because it's surprisingly difficult to find Chromecast apps beyond the major players. There is no comprehensive list of Chromecast apps, nor does Google provide a number. Rather, Google makes the Chromecast SDK widely available, so just about any developer can implement it, if it so chooses. I would guess there are a few thousand Chromecast-compatible apps out there, between iOS, PC and Android platforms. Like most streaming channels, perhaps 30 of them are worth your time.

The app selection on the Chromecast Ultra is identical to that on the regular Chromecast. You can get Netflix, Hulu, HBO Go/Now Google Play Movies/TV/Music, Spotify, Pandora, YouTube, Crackle and dozens upon dozens of other video and music providers, both major and minor. There are even a few decent games, like Just Dance, although the gaming section is still very much an afterthought.

Google and Amazon still refuse to play nicely together, though, meaning that you can't use the Chromecast to stream Amazon Video without a few clever work-arounds. (You can mirror your screen or use Google Chrome's Cast extension to cast your whole browser screen; they both technically work, neither is ideal.) This is especially a shame where the Chromecast Ultra is concerned, because Amazon Video is one of the few providers of unique 4K HDR programming at the moment.

4K content is also rather slim pickings at the moment. Netflix streams a number of its original shows and movies in UHD, sometimes with HDR features. Some YouTube videos are in 4K. If you have any of your own 4K content, you can stream it through a DLNA app like Bubble uPnP. That's about it for now.

Speaking of streaming your own content via DLNA, you'd better have a third-party app handy, because you cannot stream your own videos and music directly from your phone to your TV in Google Play Movies or Music. Given that Roku offers a native program with this feature, leaving it out is a huge disappointment.

As to whether this made a huge qualitative difference from older Chromecasts, I didn't notice any. A few seconds to buffer as your show starts is unlikely to spoil your day, and if the tradeoff is the ugly, bulky, constantly-plugged-in adapter, I’d rather take a few extra seconds to hit full- HD resolution each time.

However, no one (I hope) is buying the Chromecast Ultra to see how well it broadcasts full-HD content; they want to see it deliver 4K HDR video. For this purpose, I can attest that the Chromecast Ultra is a thing of beauty. I sat through the four videos in the YouTube HDR playlist (which aren’t terribly interesting, but do a good job of showcasing 4K's crisp resolution and HDR's vivid colors), and was consistently impressed by the vibrant reds of a skateboard, the vibrant greens of a snakeskin, the crystal clarity of a bead of sweat or the interplay of light and shadow in a redwood forest.

Achieving complete 4K HDR fidelity does take a little while, though. In my tests using an Ethernet connection on an office line that grants 35 Mbps download speeds, it still took about 40 seconds from when I started a video to when it achieved maximum resolution. Whether this is due to office network protocols is hard to say, but either way, watching full 4K HDR videos will require a little patience, assuming your network is even strong enough to support them (about 25 Mbps down).

At present, only Netflix and YouTube offer 4K and HDR content for the Chromecast Ultra; if you want more than that, you'll probably need to stick to a Roku Ultra ($130) or an Nvidia Shield TV ($200). The Amazon Fire TV can display UHD resolutions, but not HDR, which leaves the Chromecast Ultra as the cheapest competitor in a narrow field. Still, the number of compatible apps should increase over the next year, and having both functionalities in a $70 machine is nothing to sneeze at.

The Chromecast Ultra doesn't have as many apps as its competitors. The interface has some lingering flaws, and having to keep it plugged into the wall at all times is profoundly annoying, considering its dongle design. If you can look past that, though, you're paying only $70 for a device that broadcasts gorgeous 4K HDR video with easy-to-use controls on devices you already own.

While the Chromecast Ultra isn't perfect, and certainly not for everyone, it's a solid choice for videophiles who don't truck with Amazon, and who want top-notch performance for relatively little money. It's not as comprehensive as it could be, but it’s dead simple, and in the complicated world of streaming, a little simplicity can go a long way.