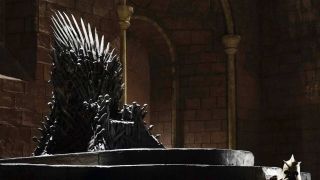 House of the Dragon is a Game of Thrones prequel spinoff (Image credit: HBO)

Winter has come and gone, as Game of Thrones concluded its eight-season run in May 2019. But soon, fire and blood will again rain down on HBO, in the form of House of the Dragon, a prequel series about the Targaryen dynasty.

In 2017, HBO began developing five potential Game of Thrones spinoffs, finding that one sounded particularly promising: a prequel set at the end of the golden Age of Heroes, thousands of years before the events in the flagship series.

But after filming a pilot starring Naomi Watts, HBO scrapped that project, then made the surprise announcement that the network had ordered 10 episodes of House of the Dragon. The series will be based on George R.R. Martin's fantasy novel "Fire & Blood" (Bantam Books, 2018), which begins with Aegon I Targaryen's conquest of Westeros some 300 years before the events of Game of Thrones.

Here's everything we know about House of the Dragon so far, including the info we have on release date, cast and plot.

House of the Dragon release date

House of the Dragon does not have a release date.

HBO announced the series order in October 2019. The next steps will be casting, preproduction, filming and postproduction (including special effects work). House of the Dragon's release date is likely a couple years in the future.

"My guess is sometime in 2022," HBO President of Programming Casey Bloys told Deadline in January 2020.

House of the Dragon cast

At this time, HBO hasn't made any casting announcements for House of the Dragon. There aren't even any rumors to report yet.

But since the series is set 300 years before Game of Thrones, don't expect any cast members from the flagship series to return (although we suppose they could play their own ancestors).

Another possibility is that actors from the other, scrapped prequel project could move over to House of the Dragon. Watts, in particular, is a high-profile star who could easily play a Targaryen.

House of the Dragon crew

While the cast is still a question mark, the crew is filling out. Writer Ryan Condal (Colony) and Game of Thrones veteran director Miguel Sapochnik will serve as co-showrunners. Sapochnik directed blockbuster Game of Thrones episodes, including Hardhome, The Long Night and the Emmy-winning Battle of the Bastards.

Other writers include Wes Tooke (Colony), Claire Kiechel (The OA, Watchmen) and Ti Mikkel (one of Martin's former assistants).

House of the Dragon plot

House of the Dragon is set several hundred years before the events of Game of Thrones. It's based on Martin's novel "Fire & Blood," which chronicles the rule of House Targaryen from the beginning. The story recounts Aegon I Targaryen's conquest of the Seven Kingdoms of Westeros.

The series could start with Aegon as a young man on Dragonstone before he embarks on the fiery, two-year campaign to take over Westeros using the ultimate weapon: his dragon Balerion. (You may have seen Balerion's huge skull in the dungeons of King's Landing on Game of Thrones.) At Aegon's side are his sisters, Visenya and Rhaenys, and their dragons. These women are also his wives, since Targaryens are notorious for incest.

Meanwhile, the outmatched Westeros rulers include Torrhen Stark, king in the North, and Loren I Lannister, king of the Rock. It's during these battles that the combatants burn down Harrenhal.

But Martin's Fire & Blood covers a few hundred years of Targaryen history. He said in a blog post, "For what it's worth, those who have read 'Fire & Blood' will realize it contains enough materials for a dozen shows."

The author has dropped some hints on his blog that House of the Dragon will cover another seismic event: the Dance of the Dragons.

"If you'd like to know a bit more of what the show will be about … well, I can't actually spill those beans, but you might want to pick up a copy of two anthologies I did with Gardner Dozois, 'DANGEROUS WOMEN' [Tor Books, 2013] and 'ROGUES' [Bantam Spectra, 2014], and then move on to Archmaester Gyldayn's history, 'FIRE & BLOOD,'" Martin teased.

Fans immediately picked up on the fact that Martin's novellas in those two anthologies are set before and during the Dance of the Dragons, a bloody and brutal Targaryen civil war that takes place 200 years before the events of Game of Thrones. (That's a little more than a century after Aegon I's conquest.)

King Viserys I's death sets off a struggle for succession between his daughter from his first marriage, Princess Rhaenyra, and his son from his second marriage, Aegon II. Princess Shireen Baratheon recounted this story in a fifth-season episode of Game of Thrones.

"Brothers fought brothers, dragons fought dragons," she reminded her father, Stannis. "By the time it was over, thousands were dead."

As Shireen noted, the conflict took its toll on the Targaryens, as almost all of their dragons died in the war. The beasts remained extinct for a century and a half, until Daenerys Targaryen hatched her three dragons in Game of Thrones.

House of the Dragon trailer

House of the Dragon does not have a trailer yet.

HBO could include a mention of the series in the network's usual year-ahead teaser in early 2020.

House of the Dragon set photos

House of the Dragon has not released any photos from the set so far.

Check back for updates as HBO moves ahead with production.