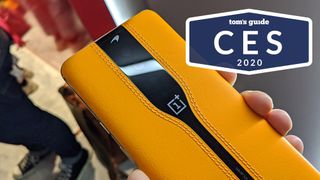 Though CES sets the stage for the coming year in laptops, TVs and smart gadgets, the same can't always be said of smartphones. Major phone makers tend to hold off their flagship releases for the first half of the year until February's Mobile World Congress, and this year, Samsung hopes to get a jump on everyone else with a Feb. 11 event that will likely introduce the Galaxy S11 and a follow-up to the Galaxy Fold.

Still, there are interesting handsets to be found at CES if you know where to look, and CES 2020 was no exception. From concept designs that hint at wild new ideas phones makers are considering, to more practical midrange and budget handsets, these are the phones that stood out at this year's show.

The best phone we saw at CES may never reach the market — at least not in its current form. But we certainly like what we've seen from the OnePlus Concept One on display in Las Vegas.

OnePlus' first attempt at a concept phone looks a lot like the OnePlus 7T that came out late last year, although the Papaya Orange leather back and lustrous aluminum casing tips you off that this is no ordinary smartphone. The real standout feature, though, surrounds the phone's three rear cameras, arrayed in a vertical line down the center of Concept One. Thanks to electrochromic glass, those lenses can appear and disappear whenever it's time to take a photo. Even more impressive, the glass doubles as a neutral density filter so that you can experiment with making your photos darker or lighter as your tastes demand.

It may be a prototype, but the Concept One felt pretty polished in our hands-on time with this OnePlus handset. It sounds as if OnePlus wants to spend more time refining the electrochromic glass so that when it does hit the market, it truly enhances the phone's mobile imaging. We're certainly hopeful that this promising design and photographic feature both find their way to OnePlus' phones soon.

Instead of a concept phone, how about a pair of phones you should be able to get your hands on — at least depending on what markets Samsung releases them in?

If you've seen last year's Galaxy Note 10 or Galaxy S10, then you'll certainly feel comfortable with the Lite versions of either phone. The idea behind the Galaxy Note 10 Lite and Galaxy S10 Lite is that you'll get a lot of the same features you'll find in the regular versions of those handsets, only with some compromises in the name of a lower price tag. Just how much lower, Samsung hasn't said.

In the case of the Note 10 Lite, you'll get a 6.7-inch AMOLED panel with a cutout for the selfie cam right in the middle of the top of the phone's display. Three cameras dot the back of the device, which comes with both the Note's characteristic S Pen and a headphone jack, which is less common on phones these days. Samsung is turning to a giant 4,500-mAh battery for the Note 10 Lite, bigger than the power pack inside the regular Note 10, while Samsung's own Exynos chip powers this model instead of the Snapdragon 855 used in U.S. versions of the Note 10.

As for the Galaxy S10 Lite, it's also got a 6.7-inch AMOLED screen, though this one's lower resolution that what you'd get on the standard S10. There's three cameras on the back of the phone, but here, a macro lens joins the wide and ultra-wide angle lenses. (The Note 10 Lite features wide, ultra-wide and telephoto cameras.) You'll get a Snapdragon 855 processor here, but with less RAM and storage than you'd get from the Galaxy S10.

We're still waiting for pricing and availability on both of Samsung's Lite models, though it would make sense for them to cost less than what you'd pay for a regular S10 or Note 10. The Exynos chipset inside the Note 10 indicates Samsung might pass over the U.S. with that model, but we're hoping to see at least one of these lower-cost phones reach these shores.

TCL is probably better known in this country for TVs rather than phones, since the phones it has made have shipped under the Alcatel and Blackberry brand names. That changed in Europe last year with the launch of the TCL Plex, and for 2020, TCL's planning on bringing its own branded phones to the U.S. And we look forward to welcoming them if the pricing for these devices is as aggressive as what TCL plans to charge for its first 5G phone.

The TCL 10 5G is one of a trio of phones that will arrive sometime this spring. While TCL hasn't disclosed many of the specs in these new handsets — that's coming at Mobile World Congress next month — it's revealed one of the most compelling features. All three TCL 10 models will cost less than $500, including the 5G version.

That's significant news in a landscape where initial phones have sported four-figure price tags and one of the cheapest models — the OnePlus 7T Pro 5G McLaren — is considered a bargain at $899. Credit the TCL phone's sub-$500 cost of the TCL 10 5G on Qualcomm's Snapdragon 765 chipset and its integrated 5G modem. We're expecting that chipset to lead to a whole slew of lower-cost 5G-ready phones in 2020 — perfect timing as wireless carriers build out their networks to reach more places this year. Who would have thought that TCL would be the one to lead the way?

If the TCL 10 5G's sub-$500 range sounds like an appealing price for a 5G phone, how does $400 grab you? That's what Coolpad plans to charge for its first 5G handset, also due out in the second quarter of this year. The CoolPad Legacy 5G also runs on a Snapdragon 765 processor, and there will be a pair of rear cameras (a 48-megapixel main lens joined by an 8-MP shooter) plus a 16-MP selfie cam up front. A 4,000 mAh battery will keep the Legacy 5G powered up — important since, low price tag or no, those 5G features draw lots of power.

We've been lukewarm toward Coolpad's phones, which tend to offer compelling prices but sacrifice on too many features. We're hoping the Legacy 5G reverses that trend when it goes on sale unlocked later this year.

The good news: TCL says it's bringing a foldable phone to the market this year. The better news: The foldable prototype we saw at CES this week felt solid and performed reasonably well, even if there are a few kinks to work out between now and the release date. The weird news: TCL's foldable may not look like this at all.

The prototype TCL showed us is a wallet-sized phone where the 7.2-inch AMOLED screen folds in two. But TCL is eyeing the foldable Motorola Razr phone with interest. Should that flip phone design prove popular — and Motorola recently pushed back the launch claiming higher-than-anticipated demand — TCL could always scrap this particular look and go with one of the other 30 to 40 designs it's been tinkering with, some of which use a similar vertical clamshell orientation to Motorola’s upcoming phone.

TCL's strength is with displays and it's been working on a foldable design for a while. (We saw earlier prototypes last year at Mobile World Congress.) So when the company does settle on a final design, it figures to add more heft to the foldable phone market, which stumbled out of the gate in 2019

Devices with e-ink displays last a long time on a charge, but that black-and-white screen can look a little blah. Hisense hopes to liven things up with a new phone that has the long-lasting benefits of e-ink but with a color display.

This isn't Hisense's first stab at an e-ink phone, as last year's Hisense 5 debuted with a grayscale screen. But this model is the first time we've seen a color e-ink display on a smartphone, which definitely adds to the visual appeal, even if the display isn't suited for watching videos or playing games. (Hisense does promise better refresh rates than you've seen on previous e-ink phones.)

It's unclear if this phone is ever coming to any market, let alone the U.S., as Hisense hasn't given a release date, price or even a name. But CES is all about seeing technology on display in new and interesting ways, and a color e-ink screen certainly ticks that box.