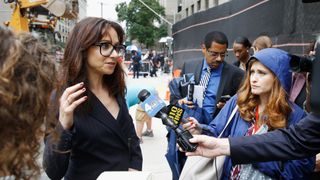 Carrie Goldberg, a victims rights attorney, is arguing for Section 230 to change as a part of her work on Herrick v. Grindr. (Image credit: John Lamparski/Getty Images)

Last Friday, at the popular Brooklyn bookstore Books Are Magic, I saw attorney Carrie Goldberg hold court in a captivated room,the audience hanging on every word, about an increasingly important piece of internet legislation: Section 230.

While Section 230 affects most major social-media services, including  Facebook, it's not a simple concept. So I've put together a helpful guide to understanding this law that protects large companies and often leaves users to fend for themselves.

A part of the Communications Decency Act (CDA) of 1996, which is Title V of the Telecommunications Act of 1996, Section 230 reads:

"No provider or user of an interactive computer service shall be treated as the publisher or speaker of any information provided by another information content provider."

What led to Section 230's creation?

Section 230 exists because of forces in place up to 1990, and it's often pegged to a pair of 1990s lawsuits that saw internet service companies facing punishment for the conduct on their platforms.

In 1990, Cubby, Inc. vs Compuserve, Inc. , saw the former bring the suit to a U.S. District Court in the Southern District of New York because of content posted to a Compuserve forum. (Compuserve was a nationwide dial-up service before the internet was opened to civilian use; Cubby was a vaguely-defined company building services for the burgeoning world of computers.)

Specifically, a Compuserve forum named Rumorville contained defamatory language about Cubby's new competitor to Rumorville, dubbed Skuttlebut. The court ruled that Compuserve could not be held liable for the articles and claims posted by users in a forum  it hosted, agreeing with Compuserve's claims that it was just the distributor, and not the creator, of the content, and that it couldn't be asked to keep track of all the content distributed under its umbrella.

MORE: How to Report Bullying and Abuse on Instagram

The second case, which took place in 1995, was Stratton Oakmont, Inc. vs. Prodigy Servs. Co. (Prodigy was another dial-up service provider.).) Posts to Prodigy's servers alleged that Stratton Oakmont (a securities investment firm) has committed "major criminal fraud" in its IPO, so a lawsuit declaring libelous action was filed and the case reached the New York Supreme Court. The court found that since Prodigy performed some content moderation, it had to be considered liable  for all user posts. After this, Prodigy stopped  moderating user posts entirely to avoid any responsibility.

The next year, the 104th United States Congress enacted the Telecommunications Act of 1996, which President Bill Clinton signed into law. The first major piece of legislation of its kind since the 1930s, it includes the Communications Decency Act (CDA) of 1996, which includes Section 230 (added as an amendment, by a wide margin of 420 to 4).

Decades passed and the internet grew, thanks in part to Section 230

Representatives Chris Cox (R-CA) and Ron Wyden (D-OR) introduced Section 230 with the intent to protect companies from user bases that are too large to easily police. For as problematic as Section 230 has become, thanks to parties acting in bad faith, its passage made sense at the time, and enabled the tech booms we've seen since.

Financial success and technological evolutions cannot excuse mistakes and corporate malfeasance, but the world of gadgets and apps we live in today would be wildly different if email, social media and other forms of communication did not have Section 230 during their nascent years.

But today, in the difficult teenage years of social media, there is cause for concern about how much companies can protect themselves with Section 230.

Why is Section 230 back in the headlines?

O'Rourke placed that idea in a section on his site titled "hold internet companies accountable for hosting and allowing for the amplification of hate speech and domestic terrorism."

Specifically,  O'Rourke calls out the websites 8chan and Stormfront as "a breeding ground for the rise of domestic terrorists and white supremacists." He also states he would mandate that the larger social-media sites "create systems designed to remove hateful activities on their sites."

The other prominent case against Section 230 is coming from the courts with the case of Herrick v. Grindr. To make a long, grisly and downright atrocious story short, Matthew Herrick brought a suit against the online dating app Grindr LLC, claiming that his former boyfriend used the app as a platform to impersonate Herrick   and generate a harassment campaign that led more than  1,000 men to approach Herrick  for sex.

At Books Are Magic, promoting her new book Nobody’s Victim: Fighting Psychos, Stalkers, Pervs, and Trolls (Penguin Group, 2019), Herrick's co-counsel Carrie Goldberg talked about how Herrick vs Grindr's defeat in the Second  U.S. Circuit Court of Appeals this past May wasn't necessarily a fatal blow. Goldberg, a pioneering lawyer in the field of victims’ rights, said  she's petitioned the Supreme Court to hear an appeal.

The case against Grindr, as argued by Herrick's attorneys, is that the company is negligent for its resolute inaction. When Herrick emailed Grindr and pleaded with the company to remove the fake profiles his ex created to impersonate him, the company did nothing. The company continued to do nothing when Herrick called Grindr to beg for help. Goldberg provided more detail of Herrick's story in a chapter of her book republished at The Lawfare Blog.

Even Amazon is trying to use Section 230 to protect itself. After a Wall Street Journal report exposed the site for allowing vendors to sell "banned, unsafe and mislabeled products," the mega-retailer is arguing that it's an online forum, and that Section 230 protects it from any liability from what third parties sell on its marketplaces. This is arguably a severe twist of the definition of a "forum."

What comes next for Section 230?

Whether or not the Herrick case will be heard by  the Supreme Court, Section 230 will  continue to be scrutinized at  the national level. Its scope has been reduced as recently as 2018, with the passage of the Allow States and Victims to Fight Online Sex Trafficking Act of 2017 (commonly known as FOSTA), which is credited for stopping websites from hosting advertisements for sex workers, though some argue that FOSTA made their lives harder and reduced safety.

If Section 230 is seriously changed, it may create a serious roadbump for  Facebook’s  plans. Last March, Facebook CEO Mark Zuckerberg declared the company would embrace  encryption and privacy, a move that former Facebook security chief Alex Stamos said would make it hard to police bad behavior among  Facebook users  actively messaging each other.

Without the protections of Section 230, Facebook could be forced to keep  monitoring conversations and pivot away from encrypted conversations. At the same time, any changes to Section 230 would also threaten apps such as the encrypted messaging platform Signal, whose protocol WhatsApp also uses. Even Gmail could be forced to change how it operates.

With such wide potential changes, a complete gutting of Section 230 is highly unlikely, but any changes to it will likely change how we live online, and who can be held accountable.