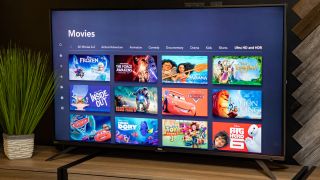 If you thought that Disney Plus would offer a stable library of movies that lasted as long as your account was active, you might have been startled when you went looking for Home Alone in the new year. The Macaulay Culkin movie is just one of a dozen films that disappeared from Disney Plus when we rang in the new year.

Yes, just like Netflix, Disney Plus seems to have an impermanent grip on certain films in its library, which also include Home Alone 2: Lost in New York and The Sandlot. A full list of cut films is below. One of the first people to post the below list of missing films was Kurt Loder (formerly of MTV News, now of Sirius XM and Reason), who tweeted them out.

I'm not exactly panicking, though. While this loss feels contrary to a quote that Disney Plus spokesperson gave to Comicbook.com: "There will not be a 'rotating slate' of licensed movies each month," it could also be a one-time thing. The Verge's Julia Alexander reported that these "missing" movies will come back to Disney Plus later, after licenses expire.

That all being said, I guess a good new year's resolution is to stream all the shows and movies you want to see now, before they disappear. Either that or just accept that licensing agreements are a fact of life and mean that movies come and go from streaming services all the time.

Whenever I check our Best Movies on Netflix list, I am never surprised to see a few movies come and go, as certain studios seemingly have a habit of taking their films on and off Netflix in rapid succession.

Of course, the service is also adding new films all the time, including the 2019 Aladdin live-action remake. Check out our guide to what's new on Disney Plus.

Movies that left Disney Plus on Jan. 1