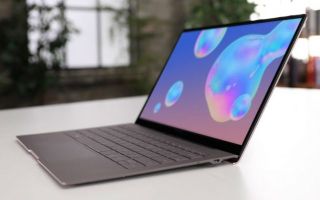 The Galaxy Book S starts at $999 and will be available in September in two color variants: Earthy Gold and Mercury Gray.

Other specs include 8GB of RAM and up to 512GB of onboard SSD storage. A microSD card slot lets you expand that storage capacity by up to 1TB. Along with a SIM card slot for LTE connectivity, the Galaxy Book S has a single USB-C port on the side, though Samsung doesn't say whether it supports Thunderbolt 3.

Regarding design, the Galaxy Book S has a superslim chassis with a traditional clamshell form-factor, a move away from its detachable Galaxy Book predecessors. Surrounding a 13.3-inch, 1080p touch screen are narrow bezels, which keep the chassis quite compact, while a slight curve at the bottom of the lid adds sexy contours to this incredible sleek machine.

Samsung's laptops haven't caught on in the same way as its Galaxy smartphones, but the company is hoping to change that by bringing the conveniences of mobile to the Galaxy Book S. We'll see how successful that approach is when we get our hands on the Galaxy Book S in September.