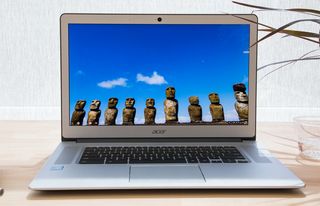 Chromebooks are great alternatives for students and anyone on a tight budget. Although they typically sport less powerful Celeron processors, the cloud-based laptops are still capable of handling most everyday tasks.

For a limited time, Amazon is taking up to 35% off  select Acer Chromebooks with prices starting at $149. The sale also includes discounts on Acer monitors, headsets, and backpacks.

Sister site, LaptopMag reviewed the Acer Chromebook 15 and liked its metal chassis, 1080p display, and solid keyboard. Though they thought its display could be brighter, they rated it 3.5 out of 5 stars for its overall performance.

As far as battery life is concerned, the Chromebook 15 lasted 9 hours and 7 minutes in LaptopMag's battery test, which should be enough to get you through a full day.

If you want to spend the least amount of money possible on a new machine, Amazon also offers the Acer Chromebook 11 N7 for $149 ($50 off).