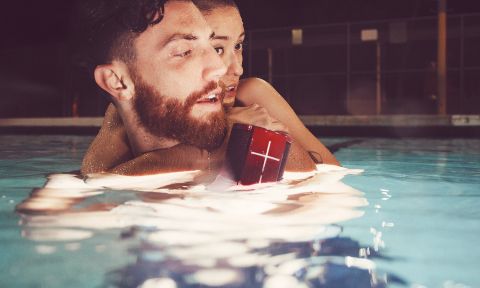 The UE Megablast sounds great, but it can't do everything an Amazon smart speaker can.

There are lots of speakers that now incorporate Amazon's Alexa personal assistant, but only a few focus on a speaker's original purpose: cranking out great-sounding tunes. Even fewer combine sound quality, smart speaker skills and portability. Ultimate Ears seeks to hit the trifecta with its Megablast, which is why it's one of the best Alexa speakers around.

The Megablast resembles UE's Megaboom, but at 9.3 x 3.5 inches, it's both taller and wider. UE also offers the Blast ($199), a smaller version of the smart speaker (7.4 x 2.7 inches). Both speakers come in four colors: graphite, blue steel, blizzard and merlot. For comparison, the new Amazon Echo offers seven color choices.

The unit includes minimal controls: There are power and Bluetooth-pairing buttons on the top of the device, and volume controls on the side. If you're using Alexa, the limited controls aren't a problem, but if you're playing via Bluetooth, you may wish that there were a way to pause a song or skip to the next track without using your mobile device. Nor is there a way to mute the microphone from the speaker; you have to use the app for that.

Under a protective plastic ring on the bottom, you'll find the micro-USB port for charging the battery. The charging port's placement can be a problem if you want always-on access to Alexa; you can't have it plugged in and have it stand upright; you'll need to lay it on its side. Purchasing the optional $40 charging dock solves that problem.

Like the Megaboom, the Megablast is rated IPX67, meaning it can withstand being submerged in water for up to 30 minutes. Neither the Echo nor the Sonos One is waterproof at all. I put it in a sink full of water for 5 minutes, and it showed no signs of harm.

Alexa could play songs from Amazon Music, turn on my Wemo switch and play a game of Jeopardy. But Amazon doesn't allow third-party speakers such as the Megablast to access all of the talents of Alexa, and that's where the Megablast falls short compared to an Amazon model. For example, you can't play music from Spotify with Alexa, and you can't add it to a multiroom audio group. Depending on which Alexa skills you want to use, this limit may be a deal breaker.

The Megablast delivers crisp treble, detailed bass and full vocals — hitting all the marks that you want when listening to music. It sounds slightly better than UE's Megaboom and much better than any Amazon speaker. Among speakers that integrate Alexa, only the Sonos One bests the Megablast, and the Sonos isn't portable.

The Megablast produced the deep bass and distorted guitars on St. Vincent's "Los Ageless" with impressive detail — not the muddy rumble that many portable speakers pump out. Annie Clark's vocals on that song were also easy to hear. On acoustic music like Fleetwood Mac's "Never Going Back Again," the speaker's bright treble tones made the picked guitar sound crisp, while the bass made the vocals resonant.

UE really put the blast in the Megablast by giving it a ton of power, which translated into one of the loudest portable speakers I've tested. At max volume, I measured 95 decibels — louder than the Megaboom. However, at that volume, the speaker was distorted; it sounded better around the 85-decibel range.

To set up the speaker, you use UE's free Ultimate Ears app. The app walks you through the process of connecting the unit to Wi-Fi, pairing it with Bluetooth and logging in to your Amazon account to enable Alexa. All smart speaker features, such as setting your address and adding skills, are handled through Amazon's Alexa app.

Once you've completed the setup, there's little you can do with the Ultimate Ears app. You can mute the microphone and check the battery status, but it lacks many of the features that make UE's Megaboom app one of the best. For example, you can't connect two speakers together for stereo sound, and there's no equalizer for tweaking the sound.

UE says you can get 16 hours of play time on the Megablast with a full charge. That's less than the Megaboom's 20 hours but still good for a portable smart speaker. After playing for more than 10 hours, the unit still had plenty of life left. (You can check the battery status in the Ultimate Ears app.) In addition, the indicator light on top turns red when it gets low. In the app, you can enable auto sleep to help preserve the battery, which is useful when you're not connected to a power source and you don't need need always-on access to Alexa.

The Megablast sounds great, but whether it's the right speaker for you depends on what you want to do with it. If you want a speaker that cranks out tunes, offers some smart speaker functions and is portable and rugged, it's a good match. However, the non-Alexa-enabled Megaboom offers longer battery life and a better app.

The smaller Blast doesn't sound quite as good as the Megablast. But it could be a fit if you're seeking a more portable option, since it's 2 inches shorter and significantly less bulky. The Amazon Tap ($129) is smaller than the Blast and offers greater Alexa integration, but the Blast delivers better audio quality and offers longer battery life (12 hours for the Blast versus 9 for the Tap).

If you're seeking a smart speaker that can take advantage of all that Alexa can do, you'll be disappointed by the limitations Amazon imposes on third-party speakers. Unfortunately, Amazon's speakers can't match the fidelity of the Megablast, which means you have to decide what matters most: a full-featured smart speaker or a great-sounding one.