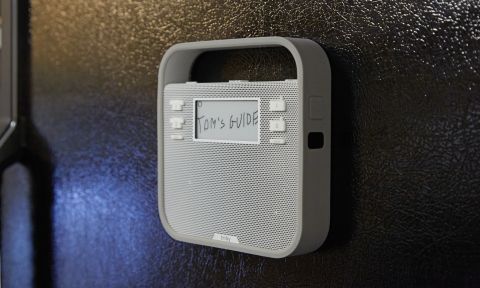 The Triby is a family-friendly Bluetooth speaker that offers Alexa functionality and fun communication tools, but it lacks the Amazon Echo's sound quality.

Thanks to Invoxia's Triby, Amazon's Alexa voice assistant is no longer confined to the mega retailer's own smart speakers. This eye-catching, $169 device brings Alexa to a small, portable gadget that you can stick on your fridge. It allows you to ask for news and weather updates, play music, control smart-home devices and more — all while you cook breakfast.

But Triby isn't just another conduit for using Amazon's neat personal assistant. It's a device designed to help keep the family connected, offering a handful of fun communication tools that let you leave emoji-laden notes for your loved ones while you're away. Triby is a unique, kid-friendly take on the connected-speaker concept, but the Invoxia device lacks the sound quality and fuller feature set that makes Amazon's Echo such a standout.

Depending on your perspective, the Triby either looks like a miniature lunchbox or the world's cutest home-security system. This gray, square-shaped speaker sports a handle at the top that makes the device easy to carry, as well as a soft rubber shell that should protect the speaker from a few small spills (you can swap in different covers). But the Triby's most important design feature is its magnetic backside, which allows you to slap the speaker onto your fridge and turn it into your personal kitchen assistant.

The entire front of the Triby is one big speaker grille; at the top edge, you'll find controls for adjusting volume and pausing and playing music. There's a 2-inch E Ink display in the center, which shows the current time, date, temperature and weather, as well as any messages you've received.

Two telephone buttons flank the screen on the left, letting you make Wi-Fi calls via the Triby app (more on that later); two radio buttons on the right play your pre-programmed radio stations or Spotify playlists of choice.

Setting up the Triby is pretty painless; all you need to do is download the Triby app for iOS or Android, power the device on, and follow a few quick prompts within the app. Once you're all set up, you can name your Triby, as well as create profiles for yourself and any family members who might also use the speaker. Other people can join your Triby account by simply logging into it on their own devices.

One of the Triby's key features is that you can send messages to the device when you're away. Using the app, you can type out a quick note, make a doodle with your finger or select some emoji, all of which will show up on the speaker's E Ink display once you hit send.

A small yellow tab pops out of the Triby every time a message is received; once the recipient pushes it back in, you'll be notified that the person got your message. This gives you an easy way to check in with your spouse or kids while you're at work, whether you want to send a nice note or use a pizza emoji to help decide dinner plans. Sure, you could always text your kids, but Triby provides a fun alternative that lets you get the attention of the whole household at once.

That's not the only way Triby aims to keep you connected to your family. You can use the app to make free calls over Wi-Fi, whether you want to call the Triby itself or dial up anyone in your household who has the app installed. Communicating via Triby worked pretty well in my testing. When I dialed the speaker from my iPhone, the Triby began ringing immediately, and my voice came through clearly once I picked up. I was also able to make Wi-Fi calls between my phone and my girlfriend's tablet via the app with no issues.

Aside from messaging and calling, the Triby app also lets you turn the speaker into a personalized radio. The Triby can play a few dozen radio stations from around the country right within the app, including news and sports stations from ABC and ESPN, as well as a ton of genre-specific stations. You can program your two favorites to the speaker's two radio buttons, making it easy to wake up with some high-energy rock (or talk radio) with a single tap.

Triby is one of the first third-party devices to support Alexa, Amazon's voice-controlled personal assistant that's also found on devices such as the Amazon Echo and Amazon Tap. I'm pleased to report that Alexa is generally as reliable on the Triby as it is on Amazon's own devices, and is just as easy to set up. Once I authorized my Amazon account on the Triby app and followed a few prompts on the Alexa app, I was good to go.

Like with the Echo, you can activate Alexa hands-free on the Triby by simply saying, "Alexa." (You can't customize the wake word like you can on the Echo, though.) Amazon's assistant was quick to help me out; when I asked for the weather, the latest news or suggestions on the nearest pizza place, I received answers within seconds. After I asked Alexa how the Yankees did last night, I got a final score as well as the time of the team's next game. When I asked about Captain America: Civil War, I got a detailed list of theaters and movie times.

The Triby is built to recognize your voice from up to 15 feet away, and it delivers on that claim. Even when sitting on my couch about 10 feet away from the device, I was able to give commands, though I did have to raise my voice a bit. On rare occasions, the Triby would ignore my "Alexa" command completely, which is an issue I almost never had on the Echo.

Alexa works with a range of different services, including Amazon's own Prime Music as well as a handful of smart-home devices from brands such as SmartThings, Wink and Nest. There are some Alexa services and features that don't work on the Triby, however, such as voice-activated Bluetooth pairing and the ability to set multiple alarms.

MORE: Best Things You Can Do with Amazon Echo

You can't ask Alexa to play Spotify or Pandora on the Triby, but you can access your Spotify library on the speaker via Spotify Connect (premium subscription required). You can also use the Triby as a standard Bluetooth speaker for playing music stored on your device. If not being able to summon Pandora or Spotify with your voice isn't a deal breaker, the Triby's missing Alexa features won't drag it down too much.

The Triby's built-in Vivo Acoustic speakers are impressively loud, filling my entire apartment with the sounds of my eclectic music library. However, the speaker's sound quality is nothing for audiophiles to go nuts over, especially compared to that of Amazon's Echo.

The thumping hip-hop of Kendrick Lamar's "King Kunta" was preserved fairly well on the Triby, but I wanted to hear the bass and vocals more clearly. Listening to the same track on an Echo was like night and day compared to the Triby. Thanks to the Echo's larger, 360-degree speaker design, I enjoyed much deeper low end and far more-even sound distribution.

This trend continued regardless of what I listened to, as everything I played on the Triby just sounded canned compared to on the Echo. The jumpy guitars of Breaking Benjamin's "Sooner or Later" had a nice bite to them on the Triby, but the song sounded so much fuller and livelier on the Echo that I found myself instantly banging my head. Atmospheric tracks such as Explosions in the Sky's "Snow and Lights" also fared better on the Echo, as I had an easier time picking out each swirly guitar riff while enjoying more-satisfying bass.

The Triby promises two weeks of battery life with Alexa off, and a much shorter two days of battery life with the voice assistant on. I've yet to drain the Triby's battery, though I did receive a 20-percent-battery warning after roughly 24 straight hours with Alexa on. It's a bummer that the Triby's battery life is so short when its marquee feature is activated, but considering that the device will likely stay on your fridge, you could always keep it connected to a long microUSB cord.

The $199 Triby is a unique entry in the emerging smart-speaker space, combining useful voice-assistant technology with a fun set of tools for keeping up with your loved ones at home. The speaker's Alexa functionality is nearly as reliable as it is on Amazon's own Echo, and being able to use the device to make free Wi-Fi calls or send silly doodles to your family are some nice extra touches. The speaker's design is equal parts fun and practical; I can't think of many other Bluetooth speakers I can stick to my fridge.

Still, it's impossible not to compare the Triby to the $179 Echo, which offers far better sound quality and a wider range of Alexa features. But if you'd prefer something more portable that makes it easy to check in with your kids or spouse at home, the Triby fills its niche well.