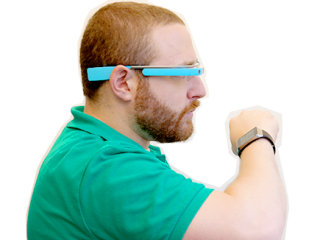 Walk into any gym, and you'll find fitness trackers strapped to everyone from protein shake-swilling workout junkies to first-time jazzercisers. Meanwhile, early adopters are dropping their Mickey Mouse collector's edition watches in favor of smartwatches that can deliver messages, Facebook, Twitter and more to your wrist. Even Google Glass, which is still not widely available, continues to make headlines on a regular basis.

From Fitbit and Android Wear to Apple's upcoming iWatch, the wearables market is expanding faster than you can say "fad." But it's clearly not a fad. In fact, the market is set to triple by the end of 2014.

So as the category grows, the question we're left asking is this: Will wearable devices replace smartphones, or will they continue to serve as mere companion pieces for handsets? We spoke to several experts and insiders to find out.

The wearables market is in its infancy, but it's growing at a rapid clip. Such growth, IDC's Ramon Llamas said, is a result of the increased functionality and convenience these devices offer consumers. Smart glasses, for example, can beam a seemingly limitless amount of information directly to your eyes, while fitness trackers provide an easy way to monitor your health and wellness. Throw in Google's new Android Wear and Apple's anticipated iWatch, and you've got a market segment that's poised to explode.

That said, a whopping 1.1 billion smartphones will ship in 2014, with 1.6 billion units shipping by 2018. So wearable device makers have their work cut out for them if they want their wares to be as ubiquitous as smartphones.

MORE: The Best Smartwatches of 2014

"We already have a very convenient screen in terms of viewing content and browsing the Internet," said Angela McIntyre, lead wearables analyst at Gartner. "Right now, the smartwatch display is significantly smaller [than a smartphone's], and with smart glasses, that content is still being developed.

"The technology still has a lot of development to go through before it could be considered a substitute for a smartphone," she added.

The good news for shoppers is that both wireless carriers and manufacturers are making it easier to jump on the wearables bandwagon. For instance, AT&T recently offered 50 percent off the LG G Watch when purchased alongside the G3 phone.

As it stands, the wearables market is largely divided into three main categories: fitness bands, smartwatches and heads-up displays. Fitness bands, like the Fitbit Flex, are designed to track your physical activity over the course of a day, letting you to see how far you've run and how many calories you've burned. You can then use that information in conjunction with your smartphone to track your long-term fitness goals and progress.

Smartwatches primarily function as wrist-worn notifiers for your smartphone alerts. Receive a text on your phone, and your watch will vibrate. In some cases, it will also let you send a reply. Watches like Sony's SmartWatch 2 and the Pebble Steel feature their own app stores, but they're still primarily designed to complement your handset.

"The Pebble is a companion device, because that's the only way to do it technically," said Myriam Joire, chief evangelist for smartwatch maker Pebble. "We are a wearable platform. The smartphone is a huge part of that.”

Other smartwatches go even further in terms of features. Although Google's Android Wear devices are dependent on their connected handsets, they offer voice recognition for searches and other commands. The Samsung Gear 2 lets you make voice calls right from your wrist by using your phone as a conduit.

Over time, fitness bands and smartwatches are likely to converge. “Of particular importance is the development of hybrid smartwatch and activity trackers,” said, Nick Spencer of ABI Research. “Basic smartwatch functionality (alerts, day screens) are only doing what the smartphone already does, but on a small screen. That’s not a powerful value prop for the consumer. Activity trackers, on the hand, do something far more compelling.”

Heads-up displays like Google Glass function in a similar fashion to smartwatches. But whereas watches force you to look away from the world around you to check your notifications, headsets are always close to your field of vision.

According to Chris Dale, Google's head of communications and public affairs for Glass, heads-up display devices like Glass reduce the amount of time people spend buried in their smartphones, letting them interact more with the world around them.

"There is this tension that exists between our physical lives and our digital lives, and we flop inelegantly between the two," Dale said. "So I will fire up my smartphone and check something out, and the next thing I know, a half hour has gone by and I'm not looking around."

And that's the biggest obstacle to this being a world dominated by wearables instead of smartphones — the technology just isn't there yet. Joire believes that the smartphone is going to remain the linchpin that wearables will rely on to access apps, as well as the Web. Sure, there are wearables like the Neptune Pine smartwatch, which has its own built-in SIM card, but this watch is prohibitively large.

Google Glass, which has a built-in Wi-Fi radio, is also largely useless without connectivity.

"[One] of the technological barriers that wearables face is simply the availability of Wi-Fi," Google's Dale shared. Glass in a lot of places is dependent on the power and functionality of a smartphone when Wi-Fi isn't around."

Connectivity isn't the only roadblock preventing wearables from replacing smartphones. There's also the matter of battery life. There's only so much juice you can squeeze out of a tiny gadget you strap to your head or wrist, especially one with a color screen. Pebble's smartwatches get around this limitation by using E-ink displays, which Joire points out, offer exceptional readability in direct sunlight, unlike the G Watch or Samsung's Gear Live.

Google Glass lasted just 5 hours on a single charge during our testing. Meanwhile, the average smartphone offers 7.5 hours of endurance, and the best models last 10 or more hours.

MORE: Why Wearable Tech Is Still Behind the Times

Apple's iWatch, one of the most anticipated wearables to date, is expected to debut this fall. Although Apple hasn't officially announced anything in terms of specs, features or pricing, Bernstein Research predicts Apple could ship as many as 50 million units in the device's first year of availability.

Various rumors point to the iWatch offering a slap-bracelet-style design, complete with a flexible OLED display. The watch is also expected to offer fitness-tracking functionality and could be used as a media controller and home-automation device. But the biggest factor in the huge amount of interest in the device is that it's coming from a company that created the iPhone and iPad, two products that revolutionized their respective markets.

“Apple’s brand and marketing are unrivalled (as are their obedient followers), so I wouldn’t be surprised if they doubled the market size,” said ABI’s Spencer.

To ensure its iWatch is a success as both a piece of technology and jewelry, Apple has recruited executives from the luxury timepiece and fashion arenas. In early July, Apple snatched up Patrick Pruniaux, vice president of sales for luxury watch brand Tag Heuer, and before that, the company grabbed Paul Deneve, former CEO of Yves Saint Laurent.

For Apple's iWatch to make an impact, Llamas said, it will have to be more stylish than the current crop of smartwatches on the market. The iWatch will also have to offer a rich third-party developer experience in order to ensure users have a large selection of compelling apps.

If the iWatch is more than a mere smartphone companion, as is expected, it could point to a future in which wearables start to replace handsets.

Unlike smartphones, which even your great uncle Chad can now use expertly, wearables are still largely a novelty. The only exception is fitness trackers, but even that category is still immature. In other words, the vast majority of people haven't had an opportunity to even see a wearable device in person, let alone use one.

As a result, there are still a lot of unknowns when it comes to when and how wearables should be used in public. For example, if it's considered rude for someone to periodically check his or her phone during a business meeting, wouldn't the same hold true for a smartwatch?

"If I was his boss, I would fire the guy," ethicist Randy Cohen said. "It's a matter of consequence whether he's checking the time or his email. He's not giving me his attention."

The device that receives the most scrutiny in this area is Google Glass. Some bars, movie theaters and a variety of other businesses have already banned the wearable headset, which is still in its beta stage. The biggest issue for most Glass critics is the device's built-in camera, which can potentially capture both photos and videos without other peoples' knowledge.

It's not just Glass' camera that has people uneasy, though. Cohen said the larger problem is that people are taking themselves out of the real world to deal with "pathetic distractions," like instant messages and emails.

As Cohen sees it, wearables, and even smartphones, negatively affect people's ability to interact with the world around them. Not only that, but they are making relationships less intimate and friendships thinner.

"It's a kind of ordinary pettiness," he said. "It's interesting, because to me, it becomes instinctive and symbolic of a kind of self-absorption that undermines other kinds of interactions."

Google's Chris Dale couldn't disagree more. Like Cohen, he is astounded by the number of people he sees walking through the world with their faces buried in their smartphones. But wearables, he explained, can change that.

"I think what wearables, in their purest form, will try to do is alleviate that kind of tension," he said. "They are going to try to almost erase that tension, so that our digital lives can coexist in a meaningful way with our physical lives."

Google made Glass a public beta by providing the headset to so-called "Explorers." That decision was made to not only improve the headset's functionality, but also to see how society at large reacted to it, and how those reactions could be addressed, Dale said.

Are wearables going to replace smartphones anytime soon? At this point, it seems unlikely. In fact, experts say it will take anywhere from 10 to 20 years before you can ditch your handset. At that point, technology may be so advanced that the devices will be wearing people.

By 2030, bio-implants could be the norm. That means fitness trackers inside of your body that can continuously monitor your health. In fact, Google is already working on smart contact lenses that monitor the glucose levels in diabetics' tears, so these patients no longer have to prick their fingers to check their blood sugar.

The more immediate future will likely see a wider array of wearable gadgets. According to Pebble's Joire, these devices could be sewn into your clothes and serve as a part of your normal wardrobe. Another category with potential is smart earbuds. “Smart earbuds are an interesting but overlooked category. They’re subtle, useful for calls, text-to-speech, voice UIs and even activity tracking (it’s a good place for heart rate monitoring, etc),” said ABI’s Spencer.

Even though wearables won't overtake smartphones for quite some time, there's no question that the fast pace of innovation is already taking the world down that path.