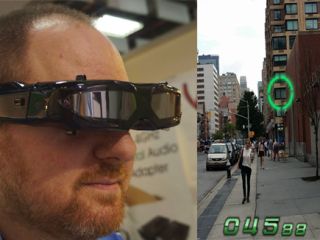 If standing next to someone with Google Glass bothers you, if you're turned off by the idea of your children playing with virtual toys rather than real ones or if you're afraid of a world where any stranger on the street can get your profile using facial recognition, I have three words for you: Get over it! Augmented reality is the future, so just put on your headgear and enjoy the ride.

Every major advance in knowledge storage and retrieval has disrupted society and frightened a few naysayers along the way. And augmented reality is no different.

The invention of writing put a lot of angry bards out of business, because it meant that humans didn't have to memorize everything. The printing press made it easier to distribute that knowledge, and computers have allowed us to edit and store our learning forever. Having augmented reality display that data on top of everyone's field of view will provide a quantum leap forward in how we play, work, learn and communicate. Wearables will serve as both our memory and our teacher, a library on our faces.

Last week, I had the privilege of moderating a panel on augmented reality and wearable computing at New York's CE Week 2014. A panel of experts in both technology and its implications for culture joined me on stage: Metaio's Brendan Scully, Augmate's Pete Wassell, AugmentedReality.org's Ori Inbar and professional ethicist Randy Cohen. In a wide-ranging, 45-minute conversation, we discussed everything from the ethics of using Amazon FireFly's object-recognition tech for shopping to whether or not kids should wear AR goggles to the sandbox.

The augmented future doesn't have everyone excited. Cohen was nonplussed when our conversation turned to NameTag, a beta Google Glass app that recognizes human faces, runs them against a database and returns information like a person's criminal record.

"There used to be a way to get to know people. It was called talking to them," he said. "I found it quite fun."

Facial recognition also concerns Google, as the company has banned such apps from the Glassware store. Senator Al Franken (D-Minn.) also wrote to FacialNetwork, the company behind the NameTag app, asking some pointed questions about how the application protects privacy.

All of these folks miss the point: You're already living in public, and facial-recognition apps just make finding that data more convenient and immediate, particularly since the information will be right in front of your eyeball. Just grab someone's picture and plug it into Google Image search, which will tell you where else that image (or others like it) exist online. From there, you'll probably find the person's Facebook page, Twitter feed or LinkedIn profile, where you will learn the individual's name, profession, friends, interests and maybe even birthday.

Though it seems scary, it's important to remember that all of that information comes from profiles you create and control. You're the one violating your own privacy. If you have a criminal record, that might be listed whether you like it or not, but your rap sheet has always been public record, available to anyone who took the time to look it up.

Of course, knowing so much about everyone you see will change the social value of memory. If you came up to me on January 15, 2005, and said, "Happy birthday," I would have been flattered that you remembered my special day. Fast forward to 2014, and Facebook lists all your friends' birthdays in the upper right corner of the screen.

Soon, you'll look at me, and everything from my age to my family structure, job history and favorite movies will appear next to me on your heads-up display. When the cloud takes the place of your human memory, you'll have to show friends you care about them not by remembering facts about them, but by how you treat them. And that's how it should be. Judge me by my processing power, not the size of my storage drive.

At last year's CES, I ran into a PR person whom I'd met before, but didn't know well. "How are you feeling?" I asked. "I was sorry to hear about your skiing accident." I had mistaken her for someone else who recently posted about a skiing accident on Facebook. I've rarely been so embarrassed. By CES 2018, if not sooner, I will have AR glasses that will prevent such a snafu and allow me to engage in meaningful interactions with the right people.

In 2018, my then 6-year-old son will use AR goggles to learn about the world around him. When he goes for a walk outside, he will look at animals and trees, and see data about them. He will play catch with friends using virtual balls that are projected on top of the kids' view of the real world.

Some believe that augmented reality experiences will cheapen my son's experience and make him a couch potato.

"We don't want kids outside playing with other kids in sandboxes, because they'd learn to interact with other people," Cohen quipped after Inbar showed a clip of a child's sandbox with virtual graphics projected onto real sand. "Anything that atomizes people, that makes them less physically active, that's not making the world better."

However, it's important to avoid confusing augmented reality, which combines the power of computing with real-world experiences, and virtual reality, which creates its own, separate environment. Augmented reality is going to get people out of the house, because it mixes the connectedness and data needed to thrive in today's world with the opportunity to experience that world.

"The dream of augmented reality is to prevent the dream of virtual reality," Scully said. "We're going to walk outside, see where our friends are and interact with virtual objects. We're going to use the Internet, which we do right now for hours and hours in our rooms, but [now we'll use it] as we walk around and take part as citizens."