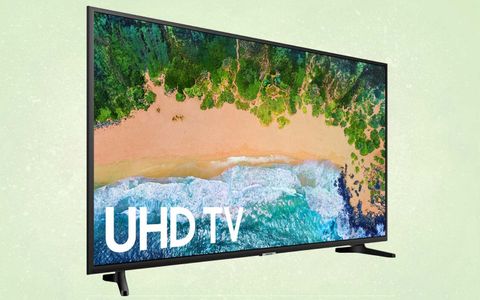 The Samsung 65-inch LED NU6900 Smart 4K TV gives you ultra-HD resolution and a solid smart TV for an affordable price, but it could use more ports.

The Samsung 65-inch LED NU6900 ($599) is a smart TV that offers plenty of the features you want for an attractive price. The LCD TV may not offer Samsung's quantum-dot QLED display, but everything on offer is poised to match whatever entry-level TV you might find on the market. For under $600 you can get 4K resolution, HDR support and Samsung's excellent smart TV platform, but the lower price does require a few compromises.

Our testing and evaluation focuses on the 65-inch model from Samsung's NU6900 line, the UN65NU6900. As of this writing, the 65-inch UN6900 sells for $599 through Best Buy. But the NU6900 model line includes other models, with the same feature set and overall performance that can be found with different screen sizes, ranging from 43-inches up to 75-inches at the largest.

Additional sizes of the NU6900 can be found through Best Buy and other consumer electronics retailers, in the following models and screen sizes:

While the screen size and dimensions will obviously vary by model, the entire NU6900 line offers the same aesthetic design, port selection and smart features. Picture quality and audio performance may vary from one model to the next. At present, our testing includes only the 65-inch model.

For a basic 4K LCD TV, the NU6900 looks surprisingly chic. The plastic chassis is basic black, but it's dressed up with a textured finish that looks much nicer than most plain rear panels. The attachable feet are also black plastic, but they are sturdy enough that you won't need to worry about the TV wobbling or getting knocked over by your kid.

The TV measures 57.4 x 33 x 2.4 inches without the stand attached, and weighs 55.1 pounds, making it just big and heavy enough that you'll want to have a second person to help with setup and moving of the TV. The attachable stand lifts the TV another 3.4 inches, and has a footprint of 6.7 x 12.5 inches. If you want to put the TV on a wall, the chassis will support a 400mm x 400mm VESA mount.

On the back of the set is a strip of grooves running the length of the TV. Upon closer inspection, these grooves aren't merely decorative, they also serve as cable management, letting you run the cables for power, HDMI and coaxial connections while keeping them tucked out of sight.

On the back of the TV is a panel of connections along the right-hand side of the chassis. The side-facing orientation of the ports makes it easy to add and remove devices, especially compared with other TVs that use a downward-facing panel.

The set is equipped with just two HDMI ports (one with ARC for soundbars and other speaker setups), and a single USB connection. That's not a lot — we generally recommend getting a TV with at least four — but it will let you connect two external sources, such as a game console and a cable box. If you want more connectivity and don't want to swap cables in and out by hand, you'll want to pick up an HDMI switch.

The rest of the port selection is fairly sparse, and it's a little surprising what you won't find, like a 3.5 millimeter jack for headphones, RCA audio connectors or any component and composite video outputs. It's all HDMI on this TV, which may be frustrating to some users.

There is a coaxial connector for attaching an antenna, and an optical audio port for connecting older surround sound systems. The set has built-in Wi-Fi and Ethernet for network connectivity, but there is no additional wireless capability, so don't bother getting Bluetooth connected headphones or speakers for this TV.

The NU6900 is a solid performer, with 3840 x 2160 Ultra HD resolution and support for HDR, including HDR10+, Samsung's proprietary high-dynamic range format. I was impressed with how well the TV handles color and contrast, and it offers decent picture quality for everything from movies and TVs shows to gaming in 4K.

Watching a scene from Spider-Man: Homecoming, the costumed hero climbed the Washington Monument. The scenery included bright blue skies and lush green foliage on the ground, with the gleaming monument stone. But while there were bright colors, it wasn't all as true-to-life as other TVs have managed. Additionally, while the NU6900's 60Hz refresh rate is more than adequate for most TV viewing, we did notice that fast motion was just a little choppy.

The vibrance of colors are a bit muted due to the set's limited color gamut. When tested with our X-Rite i1 Pro spectrophotometer, the NU6900 produced 96.25 percent of the sRGB colorspace, which is pretty lackluster when compared with other midrange sets, like the TCL 6 Series Roku TV or the Vizio E-Series 65-Inch (E65-F1), which both approached 100 percent, measuring at 9.96 and 99.23 percent, respectively. This sort of narrow gamut is more in line with what we expect from budget-priced sets, like the Sharp 65-inch 4K Roku TV, which produced a similar 97.13 percent color gamut and sells for under $500.

Color accuracy was also off, with the NU6900 getting a Delta-E rating of 3.08 (0 is perfect). That deviation from the color that should be displayed may not be drastic enough to look wrong in most circumstances when viewing the TV alone, but it is worse than we saw on the Vizio E-Series (1.36). And when compared the set side-by-side with the TCL 6-Series (1.1), the differences were noticeable.

That said, you'll find worse color performance the lower down the price scale you go; the Sharp 65-inch 4K Roku TV had a Delta-E rating of 4.06, and the Sceptre 65-inch 4K TV (U650CV-U) tested at 12.8 — both skewed heavily with unnatural color.

With a standard edge-lit LCD display, the 65-inch NU6900 struggles with many of the problems that dog other inexpensive sets. Black levels are closer to a dark gray, and while bright colors look great, more subdued colors and dimmer environments lose a lot of that luster.

Watching a scene from Blade Runner 2049, a night scene set next to a campfire displayed some good and bad performance. It did well with highlighting brightly lit objects in the dark, thanks to excellent contrast performance. But the lack of dimmable local backlighting meant that those high-contrast scenes were filled with bright halos of unwanted light spilling over into dark portions of the picture. A shot of sparks rising up from the fire into a black sky highlighted this problem, showing large swaths of screen that glowed bright despite showing a mostly black image.

When connected to an Xbox One X, the Samsung supported 4K gaming at 60Hz, making it more than capable enough for console gamers. However, the nicer extras, like HDR support for games, aren't available. The TV itself has a lag time of 22.7 milliseconds in game mode, making it OK regarding responsiveness, but you might not like the choppy motion we saw during testing.

The NU6900 is outfitted with a pair of 20-watt speakers, which made enough sound to fill our testing lab, and they offered good clarity even at high volumes. Listening to The Ramone's "The Blitzkrieg Bop," the audio stayed clear as I dialed up the volume. Even when we approached 100 percent volume, there was none of the buzzing that plagues so many inexpensive TVs.

The only real complaint I had about the audio was the lack of bass; some TVs manage to produce decent bass levels without a subwoofer, but the NU6900 wasn't one of them. If you want fuller sound, you should look into getting a soundbar with an included subwoofer.

A basic remote offers enough functionality to navigate menus with a 4-button directional pad, but it's a far cry from the more intuitive minimalist design offered on the Samsung One Remote that comes with more premium QLED sets. It's covered with additional buttons: Up and down rockers for volume control and channel selection, media playback buttons, contextual menu buttons and numbers for entering specific channels.

If you've seen the sleek, minimalist design of the One Remote, you might be disappointed to see that this is a throwback to earlier, chunkier designs. When similarly priced smart TVs from other manufacturers come with the sleek Roku remote and other more modern controls, it's hard not to think that Samsung's old-school remote is a holdover from the days of dumb TVs.

The NU6900 is outfitted with Samsung's SmartThings interface, which we consider one of the better smart TV platforms available. You'll have access to all of your favorite apps, thanks to Samsung's fairly expansive app store, and new additions to the Samsung ecosystem include support for iTunes video content.

But you don't get the full experience Samsung offers on its more premium sets. The biggest omission is the lack of voice interaction. The remote has no built-in microphone, and even the Samsung remote app lacks the option to use the Bixby voice assistant found on Samsung's higher-end models.

The Samsung NU6900 is a good option for anyone who wants to get a solid 4K smart TV without spending a lot. The attractive design, strong contrast and a decent smart TV experience make it a great set to pick up on sale.

But it has some flaws, like a limited port selection, middling picture quality and a less expansive collection of smart TV features than other Samsung sets. The TCL 6-Series Roku TV offers better picture quality and more robust smart TV software, but it also costs about $150 more. So if you want a big screen for less, the Samsung NU6900 is worth a look.