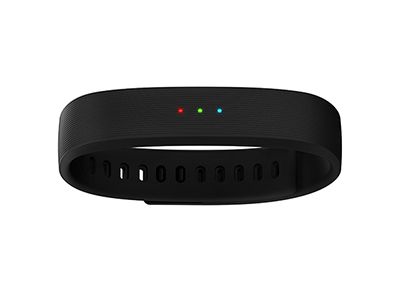 The Razer Nabu X is a competent fitness tracker with unique social and gaming features, but it currently falls short.

It's been a long time coming for the Nabu X. In 2014, Razer announced a fitness band that not only tracked steps, distance, calories and sleep, but also included social features that let you connect with other Nabu X wearers. After many delays, the Nabu X is finally available, and at $50, it's one of the most affordable fitness trackers on the market.

The Razer Nabu X is a nondescript, basic-looking tracker. The silicone band has a striped texture, giving it a ribbed feeling. The clasp uses an easy snap closure, similar to that on the Jawbone Up Move and the Misfit Flash. Also like the Move and Flash, the Nabu X lacks a display, instead using three small LED lights that flash red, green and blue to deliver notifications and alerts. However, the disclike shape of the Up Move and Misfit Flash make both of them less discreet than the Nabu X.

Like the Garmin Vivofit, the Nabu X's tracker is a finger-size module that can be popped out of the band.

The band and device are IP67 certified, meaning they can resist being submerged in up to 1 meter of water for 30 minutes. It will be safe from your shower, and you could even take it swimming; too bad the Nabu X doesn't track swimming yet. The Nabu X's resistance is similar to the Misfit Flash, and better than the Up Move, which is only splash proof.

Nabu Fitness is devoted to activity. Here, you can set goals for the amount of steps, miles, calories and sleep you want to get each day; its slider controls are super easy to adjust.

The home page of the app shows your current goal-completion status, and you can tap on any of the data points to review a timeline graph of your progress. While the app is easy to use, it took at least a full minute or two to receive my data from the band, which is too slow. I tried syncing data from a second band, and saw similar results.

As both Nabu X Utility and Fitness are so limited in scope, I would have liked to have seen them combined into one app. It would be more convenient.

Three other apps are currently available for the Nabu X. Nabu Orion is a "personal assistant" app that updates you throughout the day with your activity data and other information such as the weather. MyTracker for Nabu is a slightly more colorful fitness app that incorporates icons and bar graphs.

Good Morning Nabu sends alerts to your smartphone with information like the date, weather and your calendar events to start off your day. One bummer is that none of these apps are available outside of Android; iOS users are currently limited to Nabu Utility and Nabu Fitness.

Using the Nabu X Utility app, I set colored indicators for different alerts: blue for calls, red for alarms and green for all other notifications. Every time my iPhone 6 received an alert, the Nabu X would vibrate and light up.

I would always feel the Nabu X vibrating, but I often would miss seeing the lights on the band because they turn off within half a second.

I liked having the smartphone notifications, but I wish I could customize the vibration duration or strength for each type of notification, or even increase the duration of the flashing lights.

Razer added some social features to the Nabu X to help wearers connect with each other. One of the more innovative ideas lets you shake hands with another Nabu X wearer to exchange information like Twitter and Facebook accounts.

It's great in theory, but it was hit or miss in practice: The first time I shook hands with my co-worker Sherri Smith (who was also wearing a Nabu X), nothing happened. It was only when she walked away that I got a direct message on Twitter that she had shaken my hand. When we tried it a second time, it worked right away. It's important to note that you need to have the Nabu Utility app open in the foreground of your smartphone for the handshake feature to work at all.

A similar feature called Pulse is a little better: If other Nabu X wearers are in the same room, your band will vibrate and light up to let you know they're nearby.

The only true gaming feature currently on the Nabu X is through an Android app called Nabu Gamers. It uses the band to scan the room you're in for other wearers who have Steam accounts so you can connect with them.

Razer says developers are working on other apps and programs for the band, so gamers can connect and play augmented-reality games together. The company also says soon you'll be able to connect third-party apps to expand features, including MapMyFitness to track specific exercise routines.

The Nabu X tracked my steps fairly accurately, counting 65 steps around my office as 72 steps. Its accelerometer confused exaggerated arm movements for a couple extra steps. The device also performed well in monitoring my sleep time over the course of the four nights I wore the tracker.

I wish the Nabu X had the ability to track my morning workouts separately from my daily walking. The Up Move lets you do this, and it lets you input workouts even if you forgot to track them on the band. The Up Move also lets you track food and water intake to get a picture of your diet alongside your physical fitness.

For a budget fitness-tracker, the Nabu X Utility has some of the better sleep controls I've seen.  When turned on, the Nabu X can automatically detect when you fall asleep. I set my sleep time for 10:30 p.m. That means when the band detects no movement after 10:30 p.m., it will automatically assume I'm asleep. I also set an end time of 5:45 a.m., just before my usual 6 a.m. alarm, so it would know that I would be getting up around that time.

While the Nabu X's lights didn't do much for my groggy eyes, its vibrations were strong enough to gently nudge me awake. I also like that the alarm automatically shuts off when the band detects you're up, out of bed and moving.

The app shows you a breakdown of your night's sleep, with deep sleep, light sleep and total sleep time. The band recorded most of my total sleep, and on the nights I was particularly restless, the bar graph was jagged to show how often I tossed and turned.

Razer claims the Nabu X's lithium-polymer battery can get between five and seven days of life on a charge. After three days of wearing the Nabu X all day and night, the battery was down to 75 percent. That's good battery life for a budget fitness tracker, but not as good as the six-month life on both the Jawbone Up Move and the Misfit Flash (both of which sport a coin-cell battery).

Razer succeeded in making an affordable and functional fitness tracker with the Nabu X. It tracks steps, distance, calories and sleep well, and it delivers smartphone notifications with ease. Razer was ambitious with the Nabu X's social and gaming features, but ultimately it falls short — for now. If you're primarily looking for a fitness tracker, you're better off with the Jawbone Up Move ($49) or the Misfit Flash ($32). For hardcore Razer fans, and those intrigued by the social and gaming features to come, the Nabu X is a wristband you'll want to consider.