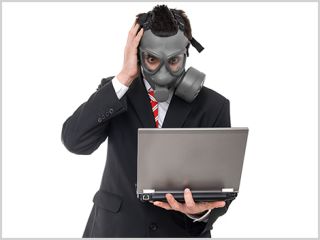 For those in the know, it didn't take Edward Snowden, WikiLeaks or the weekly revelation of the latest government surveillance scheme to realize that all citizens ought to be watching their backs. There's no doubt people are being watched, and danger is often just around the corner. Most people don't think they need a portable Geiger counter or an escape ring that saws through rope. However, it still might be cool to own one . . . just in case. These amazing gadgets are designed to protect you from all manner of threats, both real and imagined. Just remember: Being paranoid doesn't mean people aren't out to get you.

Your current iPhone case may protect against spills and drops, but what about muggers? Yellow Jacket's case (available for iPhone 4, 4s, 5 and 5s) discharges 950,000 volts of muscle-melting stun power to stop an attacker. Not only could this come in handy when walking through a sketchy neighborhood, it would also be invaluable if the end was nigh and looters had taken to the streets. A few caveats: Stun guns are banned in many states, and could land you in jail if you tried to get on an airplane with one. Also you may want to be careful around water.

This SSD will self-destruct in 10 seconds. You can erase your drive several times, but nothing's quite as secure as breaking the hardware Mission-Impossible style. For $1,500, SecureDrive's 128GB SSD can be triggered to physically auto-destruct with a simple text message. It can also be activated if someone attempts to break the SSD's password protection or remove it from your laptop. Should you question the value of such a pricey and extreme solution for typical civilians like yourself, then you just aren't paying enough attention to what's going on out there.

You never know when you're about to suffer extreme rendition — that's the point, after all. Shomer-Tec's ingenious safeguard against completely random snatchings is an ordinary-enough-looking titanium ring. Pop it off, however, and you'll find tucked inside a combination saw blade with a tip designed for use as a handcuff shim. A couple pulls across plastic handcuffs or duct tape, take out the guard, run down the catwalk, slide down the ladder — then tuck, roll and you're on your way to freedom.

If your last name is Kardashian or Bieber, then you know what a hassle it is to go anywhere without a million flashbulbs going off up in your grill. If you're not, trust us, it's a horrible invasion of privacy. Betabrand's solution is a hoodie coated with highly reflective "glass nanospheres." When a paparazzo attempts to take a flash photo, your hoodie becomes so bright it blows out the photo, leaving your face completely obscured. Granted this means wearing a hoodie for the rest of your life, but it's the price you must pay for fame.

To neocons and other nuclear holocaust fantasists (and, well, Neo), an electromagnetic pulse is the deus ex machina that will render all electronics useless and send everyone (blissfully) back to the Stone Age. Technically, they're right. These bags, which act as flexible, protective Faraday cages to prevent electromagnetic waves from penetrating your electronic goodies, are overkill for everyday life, unless you're being targeted by Agent Jones from The Matrix.

Yes, your phone emits electromagnetic radiation. Yes, the government regulates how much is too much. No, officials don't have scientific proof that the limits they have placed will actually protect you. But there's no definitive proof right now that you're going to grow a third eye. In fact, the type of radiation that cell phones do emit is not the cancer-causing, ionizing form. But, if you're still not convinced, Pong's line of cases purportedly absorb the excess heat that can be caused by microwave radiation, thanks to a metal screen lodged in the rear of the case. Now users can rest assured that their noggins will be protected, or at the very least, won't get as sweaty after talking on the phone for 20 minutes.

Be the first on your block to know that a nuclear holocaust has arrived. Radiation Watch's smartphone dongle and app turn your handset into a fully functional Geiger counter, so you learn about an attack (or leak) without waiting for the government or a horde of glowing zombies to give you the message. However, you may not want to put FEMA on speed dial at the first sign of trouble, because normal background radiation may lead to a false positive.

In an age of near-constant interaction with screens, you can never know who is surreptitiously getting an eyeful of all your secrets. Zagg's solution to peeping Toms and Tammys is a slip of plastic film that instantly makes a screen look blurry when viewed from any angle off-center. Available for a wide variety of smartphones, the InvisibleShield offers the added benefit of blocking against scratches on your screen.

Before the era of cell phones, people were helpless against thievery or assault when in dark alleys or parking lots. Not content with the now-commonplace ability to call police or take photos or videos of a potential predator from a smartphone, Lifeline goes all scream queen on bad guys. Load up the free app, sign up for the $10-per-year service, and you are a button-press away from having a shrieking alarm and a direct signal to the cops to send the cavalry to your exact GPS location.

Cleverly, there's a dead-man's switch option that triggers even if your phone is incapacitated. Lifeline plans to soon roll out an even more over-the-top option: a service that will send a drone hurtling to your location at 60 mph to record your conflict and offer a live video and audio feed so that a monitor can scare off your assailant.

The one, time-tested solution to governmental or interstellar brain-wave surveillance and induction is, of course, the tinfoil hat. Typically, though, they're hastily cobbled together and fail to comprehensively guard against intrusion. But they also are a fashion faux pas. Spindle Cat Studio's $200 straw-boater-style tinfoil hat is painstakingly hand woven; it takes tens of man-hours alone just to create the foil yarn. The result is a harmonious, fashion-forward marriage of form meeting function. When the aliens come, and they will, there's no doubt they'll know who's in charge.