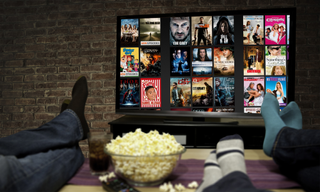 The advent of mobile devices, set-top boxes and powerful game consoles has made online video- streaming services easier to access than ever before. While the market for DVDs and Blu-ray discs is still going strong, instantly streaming the movie or TV show you want to watch beats a trip to the store and a high-price tag for a disc nine times out of 10. (For one thing, you don't have to change out of your pajamas.)

Netflix, Hulu and Amazon Prime have established themselves as the three most popular subscription video-streaming services, with more than 100 million subscribers combined. While programs like iTunes, M-Go and Amazon Instant Video (Amazon's non-Prime video streaming service) sell a la carte content, the big three services charge you a flat monthly (or yearly) rate for as much content as you care to consume.

Subscribing to all three services, however, would cost at least $291 per year — not an insubstantial sum, although still less than a cable subscription. While each one of the services is worthwhile in its own right, each one also presents a slightly different value proposition.

Netflix is the great-granddaddy of streaming services, providing a robust selection of movies and TV shows, although there's nothing too new. Hulu's selection, by comparison, is much smaller, but you can often find shows just a day after they air on broadcast TV. Amazon Prime is part of a much larger service that also nets you free shipping on Amazon products and a streaming-music library.

Which one stands out above the crowd? Tom's Guide put all three services to the test to find out.

To test content selection, I compiled four lists of top 10s. From Nielsen, an organization that monitors home media consumption, I examined 2014's most popular scripted TV shows (excluding sports, news and reality genres) and the most popular movies (based on DVD/Blu-ray sales). From IMDb, I used the top 10 highest-rated movies and TV shows of all time. Then, I tallied the availability of each movie on the service, as well as the number of seasons for each show (if available). Each service received four separate scores, one for each list, which were averaged to find out which service offered the most content that, in theory, people want to watch.

The results firmly favor Netflix. Netflix had 70 percent of Nielsen's top 10 shows available, and 63 percent of all possible seasons. Hulu scored a similar 70 percent for show availability, but only 30 percent of seasons were accounted for. Amazon Prime did not possess a single Nielsen top 10 show.

No service did extremely well when it came to movies, either modern or classic. Netflix had only one of 2014's most popular movies (How to Train Your Dragon 2), while its competitors had two apiece (Transformers: Age of Extinction and The Hunger Games: Catching Fire). From the IMDb list, Netflix and Amazon Prime had one apiece (Pulp Fiction), whereas Hulu had none.

All told, Netflix provided 29 percent of all possible content, while Amazon Prime came in at 15 percent and Hulu at 13 percent. While it may not provide exactly what you want to watch, from a general standpoint, Netflix stands head and shoulders above the competition.

One of the most important, but most difficult, areas to measure is how much content a streaming service offers. If you're looking for raw numbers, Hulu told Tom's Guide that it has about 117,000 TV episodes and 5,300 movies, equaling about 122,300 pieces of content in total. Amazon is currently investigating this number, while Netflix declined to provide numbers.

Even so, raw amount of content is not generally a reliable metric; having hundreds of thousands of movies and TV shows isn't worth much if they're not what you want to watch. Similarly, all three services have massive amounts of niche content and — if we're being totally honest — tons of titles that just aren't very good.

If there's something in particular you want to watch, consult Can I Stream.It? This search engine trawls popular streaming services (both subscription and a la carte) and tells you where you can find your TV show or movie of choice.

Note, too, that each service offers a number of original shows, such as Daredevil on Netflix, Deadbeat on Hulu or Mozart in the Jungle on Amazon Prime. Amazon Prime's shows generally get the most critical acclaim, whereas Hulu's tend to get the least. Netflix's shows tend to be the most popular.

Although no one service can offer all content for all people, Netflix seems to have the most TV shows and movies that cater to the broadest selection of tastes.

All the content in the world won't do you any good if you don't have a way to track it down, which is why interface is so important. A good UI should be pretty, intuitive, snappy and put as little space as possible between you and what you want to watch. I tested each service on an iPad, a Windows 10 computer and a streaming device for a TV (a PlayStation 4).

Netflix offers the most striking design, full of dark reds and grays. The search feature is also much better than its two competitors'. Rather than entering a full phrase and searching one title at a time, the Netflix algorithm automatically suggests titles. I could also rate titles once I'd finished watching them, which means that the service gets quite apt at recommending new titles.

Hulu's interface provided a moderately good experience, with large graphics to represent shows and movies against a white background with a few green flourishes. Searching for shows can be a bit of a pain, though. Hulu does not autocomplete search queries, and while it does recommend shows based on what you watch, there are no ratings. This means if you watch a show once and hate it, it will still factor into which shows Hulu thinks you should watch next.

Of the three programs, Amazon Prime easily has the weakest presentation. On set-top boxes and game consoles, the layout is gray and utilitarian. Finding content is not easy, as the search tends to put a lot of Amazon content front-and-center, and make users dig around in sub-menus for something as simple as genres.

The interface on a computer, however, is like trying to search for content on a late '90s website. The Amazon Prime video search works just the same as the rest of Amazon's site: plain white interface, orange text and lots of confusing side menus. It even separates out seasons of individual shows for maximum confusion.

If you have a Fire device, such as a Fire TV or Kindle Fire tablet, the Amazon interface is actually quite gorgeous, with a slick slate background, helpful recommendations and smart content organization. On other devices, though, finding something to watch feels a lot more frustrating than exciting.

With a smart, snappy search and an attractive interface across mobile, TV and computer platforms, Netflix easily places above its more labyrinthine competitors.

In my tests, I didn't discover any significant difference between video quality and buffering time of the three services. In fact, video-streaming quality tends to be much more dependent on a user's home setup than on company servers.

All three services can stream videos at full-HD 1080p resolution, but Netflix and Amazon take it a step further by offering select 4K TV shows and movies. At present, Amazon has a bigger selection of 4K content, and also does not charge additional money to use it (as Netflix does), so the service has a slight edge over its competitors when it comes to hardcore videophiles.

Luckily, streaming services are available on just about every device these days. Most mobile devices, smart TVs, set-top boxes, game consoles, Blu-ray players and computers have access to all three services — with a few notable exceptions.

Amazon Prime Instant Video is not nearly as widely available as Netflix or Hulu. You can't watch Amazon Prime on Android devices, Chromecasts, Apple TVs or any device that runs on the Android TV operating system. It works on other major platforms, though, including Windows, Mac OS, Linux and iOS.

While there's a good chance you already own a device that supports the Netflix and Hulu apps, Amazon Prime is not nearly as widely available.

Hulu has three options: a free service, a standard $8-per-month plan and an $11-per-month "no commercials plan." You can watch a lot of recent TV episodes, as well as some older movies and full series on Hulu's website, but generally, you can only do so on a computer. The $8 plan gives you access to Hulu's full library, although you do have to watch frequent commercials, which seems cheeky in an age where both Netflix and Amazon give you no commercials for roughly the same price. Even the $11 plan does not obviate commercials entirely; a number of shows (like Marvel's Agents of S.H.I.E.L.D.) are contractually obligated to have commercials, so Hulu simply front- and back-loads two-minute ads instead of interrupting the show every few minutes.

Amazon Prime costs $99 per year, which shakes out to $8.25 per month. While this is slightly more expensive than Hulu's standard package, it's also much more valuable. Amazon Prime has a whole host of side benefits, including free shipping on most Amazon items, access to unlimited music streaming and a free Kindle book to borrow every month. What Amazon lacks in content, it endeavors to make up for with overall utility.

Amazon Prime is cheaper than Netflix, only marginally more expensive than Hulu and offers a great deal more for your money than just streaming video. However, you can't pay for it month-to-month.

While the three most popular streaming services don't offer exactly the same content, on the whole, Netflix has the most TV shows and movies, the prettiest interface and the widest availability. The service has consistently led the online streaming market, and it's not hard to see why. It's easy to watch your favorite shows on your favorite devices, and it doesn't cost much to do so.

That isn't to say that you should necessarily run out and buy a Netflix subscription right now, though. If you're just looking for stuff to watch, you don't really have to pay for it at all. Services like Crackle will give you lots of content on a rotating basis if you can live with some commercials, and boxes like Roku are absolutely overflowing with free niche channels for old movies and cult TV series.

Furthermore, each one of the big three streaming services has at least one area of expertise that the other two do not. Netflix excels at all-around selection, but don't expect to find anything too new there. Hulu has the latest and greatest shows, plus surprisingly good selections of British TV and anime. Amazon Prime has a ton of shows from Viacom channels, including MTV, Comedy Central and Nickelodeon. Still, when compared head-to-head-to-head, Netflix is currently the standard to beat.