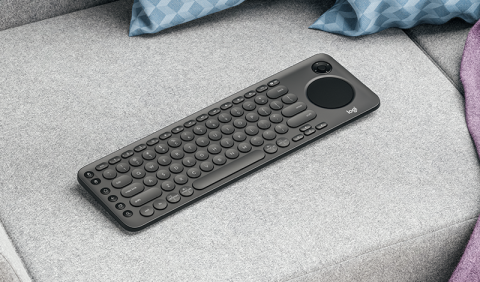 The Logitech K600 TV Keyboard's compatibility is a little unpredictable, but it's at least worth a look from smart-TV aficionados.

The line between "smart TV" and "computer" is blurrier than it's ever been. Smart TVs can run programs, browse the internet and connect wireless peripherals. And if your smart TV is nearly as functional as a computer, shouldn't your input device be a little more nuanced than a remote control?

This is the question that the Logitech K600 TV Keyboard ($70) poses – and answers. Yes, it is extremely handy to have a full keyboard at your disposal for a smart TV. No, it's not necessary. You might get some use out of it, especially if you needed a small, versatile keyboard in your life anyway.

While the K600's compatibility is a little too unpredictable to recommend the product wholeheartedly, it's at least worth a look if your smart TV is at the center of your online life.

The K600 is neither as large as a full-size keyboard, nor as small as the average tenkeyless peripheral, measuring 14.4 x 4.6 x 0.8 inches. Instead of a numpad, there's a circular touchpad, with a remote-control style directional pad just above it. These are both very helpful when connected to a smart TV, but lack the kind of precision necessary to replace a mouse on a computer. You can also press down on the left or right sides of the touchpad to replicate left and right clicks, respectively.

There are also some extra buttons on the left side of the keyboard: left-click, right-click, home, back, tab view and search. The left- and right-click buttons may seem superfluous, since the touchpad can do the same thing, but not every application recognizes the touchpad. More on that later.

In the center, you've got a standard array of keys, plus a few extra Function commands for brightness, volume, power and so forth. Once you set the K600 up, you really can control your entire TV without a remote, from powering it up, to accessing the menu with the touch of a button. I was sure that I'd have to use the keyboard in conjunction with a remote, and was pleasantly surprised to discover that I was wrong.

The K600's most polarizing feature is probably going to be its circular keys. At first, I adored these keys, because they're so darn attractive and surprisingly comfortable. After about a day, I despised them, because of their imprecision and cramped feel. After another day, I had come back around to mostly liking them.

I think, like most novel tech features, they take some getting used to. However, I probably wouldn't trust the keyboard for everyday productivity. To test it further, I have been writing this review on the K600, and I've made more typos than I care to admit.

First, you can use the K600 with a computer or a mobile device, and it works fine. I wouldn't buy one specifically for that purpose, but you can indeed sync it up with all of your go-to devices. You can also modify some button commands and scrolling features via the Logitech Options software, but the program is optional for all but the most tweak-happy power users.

The K600 comes with a wireless USB dongle, and you can set up two other connections via Bluetooth. Pairing is a fairly foolproof process; just hold down a button and wait for the light to start blinking. You can also switch among three different inputs instantaneously just by hitting the F1, F2 and F3 buttons. I had the K600 connected to a TV, a computer and an Android phone, and got some use out of it with every device.

The K600 works with most modern (2016 and later) Samsung, LG and Sony Bravia TVs, although you can double-check whether your model will work on Logitech's website. Depending on your model, you may be able to connect via Bluetooth, but if not, the wireless dongle will get the job done just fine.

I tested the K600 with a 55-inch Samsung SUHD TV running on the Tizen OS. The setup process is a little cumbersome; simply plugging in the wireless dongle does not activate the keyboard. Instead, you have to plug in the dongle, power up the keyboard, visit an activation website, hold down a keyboard command and view a complicated list of compatible apps.

You have to do that only once, so the setup process is a pain, but ultimately forgivable. What's harder to wrap one's head around is just how granular the K600's compatibility with different apps can get. For example: the D-pad works with the TV's main menu, but the touchpad, the text keys and the media keys don't. Everything works with the web browser – except the media keys.

Netflix is pretty generous, letting you use everything but the touchpad. But Amazon Prime is a bit stingier, since you can't use text entry – arguably the best reason to have a smart-TV keyboard in the first place.

MORE: This Fire TV Keyboard Is the Perfect Home for Your Remote

In fact, no one app takes advantage of the entire keyboard, and it's often quite arbitrary which features apps allow or deny. This isn't really the K600's fault, since compatibility happens at the app developer's end, but it still makes the keyboard much less useful than it could be. Maybe your favorite app will work flawlessly, and maybe it won't.

Still, when the K600 works, it works very well. Being able to type for what you want to watch on Netflix is just as delightfully simple as it sounds.

Text entry takes much, much less time than painstakingly hunting and pecking for letters on a remote control, while the d-pad and media keys are just as zippy as what you'd find on a dedicated remote. Furthermore, it's impossible to overstate how useful the touchpad is for a web browser – assuming, of course, you get a lot of use out of your smart-TV's web browser.

Being able to type for what you want to watch on Netflix is just as delightfully simple as it sounds.

My only complaint about the K600's performance is that the wireless signal requires a pretty steady line of sight  to function properly. While testing it, I had to sit on the floor in our office lab, with a partially obstructed (but mostly clear) view of the dongle. Even so, the K600 repeated some letters, skipped others and interpreted my "enter" command as additional characters.

This shouldn't be a problem in a living room, although I wonder whether putting the USB dongle on the rear side of a TV – where most USB ports live – will have a negative impact over time.

The K600 is a pretty niche product, but that doesn't make it a bad one. If you find yourself constantly using the search feature on your smart TV and wish you didn't have to go through the cumbersome process with your remote control, the K600 is an elegant solution to a minor but noticeable annoyance.

Still, its incomplete compatibility across apps and its cramped keys make it a tougher recommendation. And unless app developers make smart TV keyboards a priority – which I don't think they're going to do – the K600 is always going to represent a slightly kneecapped way to interface with a TV.

If you live and breathe through your smart TV, the K600 is worth the investment; otherwise, the best tool for the job probably came with your television set.