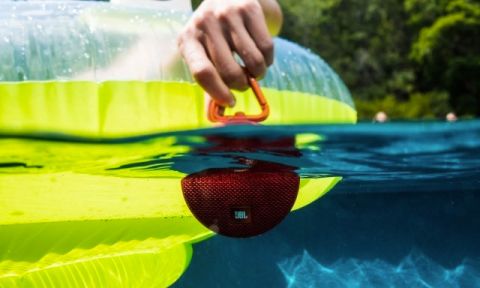 The Clip 2 retains the hockey puck form of the original Clip, but little else has stayed the same. A mesh fabric replaces the hard speaker grill on the front, giving it a more modern look. It’s available in black, blue, red, teal and gray — which are fewer options than what the Clip+ offered.

The integrated carabiner is now much more flexible. Instead of being a fixed hook that’s part of the speaker’s casing, it’s a regular carabiner that you can move and adjust — a great improvement.

At 5.5 x 3.7 x 1.7 inches, the unit is a full inch bigger than the original Clip. It also got heavier, going from 5.3 to 6.5 ounces. However, neither change limits its portability, and the improvements outweigh any additional bulk.

For such a small device, JBL really packed in the features. On the left side, you’ll find volume buttons and a button marked with a phone icon. You can use the latter to answer calls, but it’s got hidden talents: You can also hit it to pause or play a song, or, if you push it twice quickly, skip to the next track.

The left side features the power and Bluetooth pairing button, along with a micro USB port for recharging the battery.

A cable that's designed to plug into a headphone jack is threaded along the outside of the case, and it snaps into the back of the speaker so you don’t need to carry a separate cord if you prefer a wired connection. It’s a useful carryover from the original Clip’s design.

For many people, the biggest upgrade incentive may be that the Clip 2 has an IPX7 water-resistance rating, which means that it can be submerged in up to 1 meter of water for up to 30 minutes. The Clip+ was just splash-proof. I put the Clip 2 in a sinkful of water for 5 minutes, and didn't have any problems with it later.

The Clip 2 improves on the already impressive audio quality of the original Clip, delivering impressive treble, midrange and bass for a small speaker.

The Clip 2 sounds particularly good on vocals, thanks to noticeable midrange tones — something many small speakers eschew. Justin Timberlake’s vocals on “Can’t Stop the Feeling!” were rich and clear, while the same song on Polk’s Boom Swimmer Duo felt thin. The Clip 2 had no problem producing the layered sounds of Radiohead’s “Burn The Witch,” and the Beatles’ “A Hard Day’s Night” was crisp and full.

The quality was especially noticeable on acoustic songs. Miles Davis’ trumpet on “Summertime” sounded much more realistic than it did through the Swimmer, and Lindsey Buckingham’s fingerpicking on Fleetwood Mac’s “Never Going Back Again” had pleasing resonance.

One weak spot is volume: the Clip 2 maxed out at about 80 decibels, which is enough for listening under typical conditions, but a noisy pool may wash away the sound.

The Clip 2 paired easily with iOS and Android devices. JBL doesn’t state the wireless range, but I found the signal started to break up around 50 feet from the source, which was an improvement over the previous generation.

The Clip 2 doesn’t offer any tone adjustments or an app for additional features. You can pair together two Clip 2s by pressing the Bluetooth button for 5 seconds on each unit.

The Clip 2 includes a speakerphone, which can be handy to have on a device that's so easy to carry. I found that I could hear other people more easily than I could through the iPhone’s built-in speakerphone. The people I spoke with said the Clip 2’s microphone was a little softer than the iPhone’s, but overall, it was comparable.

JBL improved the Clip 2’s battery life to 8 hours, from 5 on the original. The Swimmer Duo is also advertised to hold out for 8 hours. I had no problem eclipsing that mark; after more than 10 hours of listening at a low-to-moderate volume, the Clip was still going strong.

If you’re looking for an ultraportable Bluetooth speaker that costs less than $100, the Clip 2 is the best option. It’s waterproof, has good battery life and sounds great. Other ultraportables usually falter when it comes to sound quality, but the Clip 2 delivers nearly as much fidelity as the $100 UE Roll 2.

If you own the original Clip, which wasn’t waterproof, you may want to upgrade if you find yourself using it outside frequently. And if you’re not bringing it wherever you are, you should be.