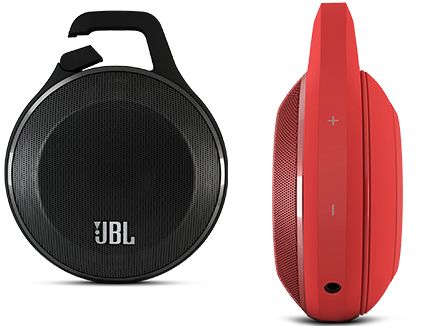 Editor's Note: This review has been updated with our impressions of the JBL Clip+, which adds water resistance to the original Clip.

Ultraportable Bluetooth speakers take the convenience of wireless sound and shrink the package to make it even easier to share audio with people around you. These tiny speakers range in cost and sound quality, with most sacrificing the latter for a reduction in size. But JBL's $50 Clip delivers fantastic sound in a form that's easy to take anywhere, and its recent Clip+ refresh adds even more value by introducing a splashproof design.

Since the JBL Clip was originally released, more inexpensive, good-sounding Bluetooth speakers have become available, but none match the Clip+’s combination of price, features and sound quality. The second-generation Clip+ keeps the unit ahead of the pack by slightly improving sound and adding a key ingredient: water resistance.

Compared with the original Clip, the Clip+ produces crisper treble and more detailed bass. On Mark Ronson’s “Uptown Funk,” the horns sounded more lively on the Clip+ than on the original Clip, while vocals on songs like Florence + the Machine’s “What Kind of Man” sounded fuller.

But the big reason to upgrade is the water resistance. The new version can withstand a splash of water—though it shouldn’t be submerged. It functioned fine after I sprayed it with water from the kitchen sink. The added protection makes it an even better choice for taking everywhere.

Unfortunately, JBL didn’t improve the battery life, the one issue that still remains with this speaker.

Not much bigger than a hockey puck, the 4.2 x 3.5 x 1.7-inch Clip is significantly smaller than portable Bluetooth speakers such as the Braven 570 (6.25 x 2.5 x 1.75 inches) or Fugoo Style (7.4 x 2.9 x 2.3-inch). And it weighs just 5.3 ounces, whereas many regular portable models weigh in at a pound or more. The smaller size and lighter weight opened up more possibilities for taking the speaker with me everywhere I went.

Available in black, gray, red, purple and blue, the Clip's hard plastic case protects it from the bumps and dings that it will inevitability encounter. A metal grille covers the 40mm driver that produces the sound. I tested the black version.

Unlike the Boom Swimmer, the Clip isn't waterproof or dustproof, so you may want to avoid using it too close to the pool.

The Clip's name comes from the integrated carabiner — a handy way to attach the speaker your bag or belt loop, or just a convenient place to hook your finger as you carry the device.

The JBL Clip paired easily with iOS and Android devices via Bluetooth. To put the speaker into discovery mode, press the Bluetooth symbol on the left side. The blue indicator light on the front of the speaker blinks until the JBL pairs with your mobile device.

On an Android device, go to Settings and look for the speaker listed in Available Devices. (You may need to touch Search for Devices.) In iOS, go to Settings > Bluetooth, where the JBL Clip should appear under Devices. You'll hear a chirp when the device and speaker connect.

JBL doesn't state a range for the Clip's wireless connectivity. I found that it maintained a strong connection from 20 feet away, with a clear line of sight.

The Clip also includes an integrated, 11.5-inch cable for connecting directly to a device's headphone jack (3.5 mm), which can be useful if you want to improve battery life.

Looking at the single, tiny speaker, I expected little in the way of sonic fidelity from the Clip, but it easily exceeded my expectations. While subtleties are lost — the speaker couldn't produce most of the fine details on St. Vincent's "Digital Witness," for example — overall, the Clip delivers a strong balance of treble and midrange tones.

I appreciated the sharp snare drum pops and full vocals on Lorde's "Team," as well as the warm saxophones on Charles Mingus' "Goodbye Pork Pie Hat." You shouldn't expect deep, booming bass, though; the Clip leaves out most of the low-end frequencies.

Compared to the tinny speakers that are included on your mobile device or even laptop, the Clip ups the fidelity by an order of magnitude. It also blows away the sound quality of other ultraportable Bluetooth speakers such as the Boom Swimmer or Boombot Rex, which tend to sound thin and represent only a small improvement over the built-in speakers on a MacBook Pro.

With 3.2 watts of power, the Clip gets loud enough to be heard outside above lawn mowers and city traffic, but it tends to distort as you get toward the upper reaches of its volume capability.

A listening tip: The Clip doesn't sound as good from the side as it does when you are facing it, and you'll get the best sound quality if you can set the speaker near ear level.

To round out the features, JBL included a speakerphone in the Clip. It's a nice-to-have feature, and makes it easier to hear people on the other end of the call. However, I found that my voice came across muffled to those I called.The Clip's speakerphone is not as crisp and clear as more expensive portable Bluetooth speakers like the $200 UE Boom.

JBL states that you can listen for 5 hours on a full charge, and we found that to be about accurate. In one test, we ran out of juice after 4 hours of listening at low volume, but on another occasion, the speaker lasted close to 6 hours. Either way, that's not a lot of time to go without needing a charge. The short battery life could definitely cramp your mobile lifestyle.

The blue light on the front of the Clip changes to red when the battery level gets low. From that point, you have about 20 minutes of playing time before the power runs out. When this happens, the Clip's battery charges through a microUSB connection.

At just $50, the JBL Clip delivers on almost all aspects that we look for in an ultraportable Bluetooth speaker: It's inexpensive, small and sounds great. It represents a big improvement over the built-in speakers found on mobile devices and laptops, and doesn't add much weight to your burden. While the battery life is limited, I can overlook that in return for getting better sound anywhere I go.