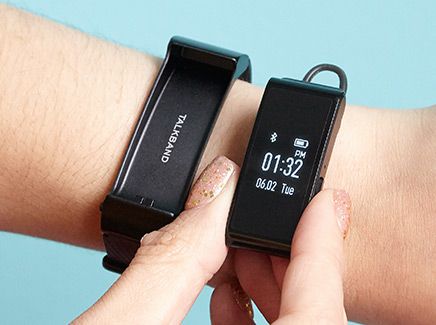 The $179 Huawei TalkBand B2 is an activity tracker that doubles as a Bluetooth earpiece, but its wonky sleep tracking, limited app functionality and short battery life hold it back.

Huawei returns to the fitness scene with the TalkBand B2. Like the original B1, this $179 device tracks steps, calories and sleep, and you can even pop the module off its base and stick it on your ear to use as a Bluetooth earpiece for calls. However, the B2 is made from more premium materials, and it now integrates with Jawbone's app ecosystem. After testing it, we have some reservations about the band's wonky sleep monitoring and lackluster battery life.

Huawei gave the TalkBand B2 a much-needed design upgrade from the B1. The B2 ditches the B1's chintzy plastic design and physical scroll button for a sleeker aluminum alloy and a 0.73-inch PMOLED display. This new design is powerful and professional, and will pair with a suit much more easily than the earlier version.

The band's display is now touch-enabled, so there's no more constant button pressing to scroll between screens like on the B1. But Huawei didn't get rid of all the buttons - there's one on the side of the module for waking the screen and bringing up the menu.

The band is pretty much the same as before, featuring a cradle for the module to sit in and a plastic construction with an easy snap closure. There are two small round buttons on one side of the cradle, which, when pressed, release the module for when you want to use it as a Bluetooth earpiece.

My review unit was black, but the B2 also comes in silver and gold. While I enjoy having a touch screen for quick and easy viewing of my data, I prefer the more subtle yet chic design of the $99 Jawbone Up2.

You can jazz up the B2 with a leather band for the module if the default plastic one isn't your style. The B2 is IP57 rated, just like the B1, meaning it can withstand dust and up to a meter of water for 30 minutes.

The TalkBand B2 has six screens, with a home screen that shows the date, time, battery life and Bluetooth connectivity status. I appreciated the layout of the screens - the typography was large and narrow, making it easy to read. The small moving images are a fun touch that not many other fitness trackers include; there’s feet walking (activity), a flickering flame (calorie burn) and a snoring moon (sleep).

However, there isn't much else to do on the pages. You can only interact with the timer page, on which you can long press the start icon to begin tracking a workout. You can tap to pause the workout at any time after that, or end it by tapping the stop icon.

The B2's side button has two functions: to wake the screen and to enter what I like to call the "Huawei menu." Pressing and holding the button for a few seconds brings up three options, one of which is Bluetooth connectivity. You use this during the initial setup of the device, when pairing it to your phone.

The other two options are Find My Phone and Camera Remote, and only work with Huawei smartphones such as the P8 and the P8 Lite. I like the phone-finder option: Tapping the magnifying glass icon lets the B2 search for your smartphone; upon finding it (if it's in Bluetooth range), the phone begins to buzz and ring with a jingly tune and a cute little voice saying, "I'm here! I'm here!"

The B2 uses a new version of the Huawei Wear app, which has a much cleaner look and feel than the one released for the B1. It has a lot of white space, with colored circles that represent how far along you are in your daily activity goal.

The main screen shows your step count, as well as a breakdown of how much of your activity has consisted of walking, running or cycling. Swiping to the left brings up a similar page showing your sleep time from the previous night, with deep and light sleep totals as well as how long it took you to fall asleep.

You can tap the big circles to show detailed bar graphs of when you were most active during the day, and when you were in different phases of sleep throughout the night. I wish you could see your tracked workout sessions in this view as well, as you can in the Jawbone Up app, but the band doesn't break them out individually.

Overall, the software is an improvement from that of the TalkBand B1, but it doesn't top Jawbone's and Fitbit's more warm and inviting apps. Those apps not only have more ways of viewing your data and more features, but they also use bright colors and icons to enhance the experience.

The TalkBand B2 is the first third-party fitness tracker to integrate with Jawbone's Up app, but it's disappointing. Activity information is the only thing shared between the Huawei Wear app and the Up app; I wish the B2's Up app also transferred over sleep data to make use of Jawbone's advanced sleep-tracking features.

MORE: The Best GPS Watches for Sports and Athletics

Having access to that sleep data would provide more fuel for Smart Coach, Jawbone's health adviser, which uses your stats to give you tips to get more fit. A Huawei representative told me that the company is working with Jawbone to update the B2 with sleep data integration for the Up app.

The TalkBand B2 tracked my activity fairly accurately: I walked 105 steps around my office and the band counted them as 99 steps. The band took only about 10 seconds to sync to the app each time I opened it. Also, the TalkBand's inactivity alerts made my wrist buzz once each hour, reminding me to move from my office chair.

Alarms were also accurate and easy to use. I set two: one to wake me up and one to remind me to take my daily medication. Both sent strong vibrations to my wrist, and I could easily dismiss them with a tap of the side button.

The B2 automatically detects when you fall asleep, which would be a plus if it were accurate. The first night I wore it, the band had me asleep starting at around 1 a.m., when really I was in dreamland by 11:30 p.m. Every other night, the app did a better job, but it was consistently around a half hour off with my total sleep times.

To make matters worse, the B2 recorded me as asleep for an extra 45 minutes when I was standing still on the subway ride to work. Huawei told me to update the device's firmware to solve the problem, but my firmware was already up to date before this occurred.

When your smartphone receives a call, you can detach the B2's module and hook it to your ear to use it as a Bluetooth earpiece. The display also lights up and shows you who is calling with either a name or a phone number (for those unknown callers), similarly to the notifications on the Fitbit Charge HR.

The B2 comes with three-sized ear inserts, so you can find the best fit. I chose the largest one, and despite feeling like the insert would fall out of my ear, it never actually did.

Aside from one dropped call, the B2 served as a dependable Bluetooth earpiece that allowed my mom to hear me over the noise of rush-hour traffic in Brooklyn.

The TalkBand B2 has the same 95-mAh battery as the B1, which means it should get at least six days on a single charge. After three days of all-day and all-night use (with one Bluetooth call), the battery was down to 30 percent. That's slightly shorter than the battery life of the Fitbit Charge HR, which can last five days.

The Huawei TalkBand B2 is a wearable that really wants to stand out from the rest of the pack. It achieves that to an extent with its Bluetooth headset feature, which lets you make and take calls easily. However, as a fitness tracker, the device falls short. Its sleep tracking is inaccurate, and its companion app is too basic compared to the likes of Jawbone and Fitbit. For $30 less, the Fitbit Charge HR has better fitness features, including heart-rate monitoring, as well as a more informative and engaging app.