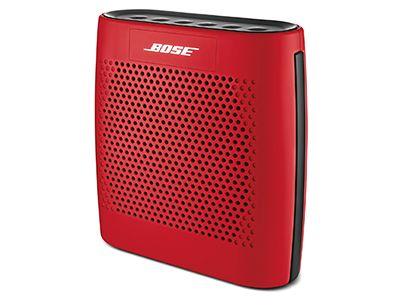 Bose's SoundLink Color delivers excellent audio for the money in your choice of five colors.

In the race to differentiate a Bluetooth speaker from the pack, many companies stuff in feature upon feature — and often lose sight of the most important thing a speaker can do: produce rich and full sound. With its $129 SoundLink Color, Bose focuses on the music, and the result is a small speaker that sounds great. Whether it's right for you depends on if you want to do anything besides listen to music.

The Color comes in black, white, blue, red and mint. I tested a red model. Its hard, plastic shell feels sturdy enough to withstand everyday use, though it isn't rated to handle drops or water exposure.

Bucking a minimalist trend among many Bluetooth speakers, Bose took pains to make the SoundLink Color as easy to use as possible. The company placed the controls for every function across the top; there are separate buttons for power, Bluetooth pairing, switching to auxiliary input, playing and pausing music, and volume up and down.

These are the only features offered by the speaker. There's no app for additional options, nor is there a built-in speakerphone. This Bluetooth speaker is focused on music playback — plain and simple.

On the back, you'll find the micro-USB connector for charging the battery, and a 3.5-mm auxiliary input for wired music sources. Bose elected to close most of the back, which means the speaker sounds best when the front is facing you — unlike 360-degree speakers like the $200 UE Boom.

With a balanced combination of deep bass and crisp treble, the SoundLink Color easily outperforms other portable speakers in its price range.

On Mark Ronson's "Uptown Funk," the Bose shone on both the bass driving the song's rhythm and the treble tone in the bright horn accents. It produced far richer bass than the Mini Jambox, and handled the treble better than the $150 JBL Charge 2. Rihanna's vocals on "FourFiveSeconds" rose clearly above Paul McCartney's resonant acoustic guitar.

The saxophones on Charles Mingus' "Goodbye Pork Pie Hat" sounded full and warm, while his acoustic bass stood out more in the mix than on the Mini Jambox.

The speaker's main audio flaw is a result of the device's narrow body. It creates little left-right stereo separation, which negated the swirling guitars on Led Zeppelin's "What Is and What Should Never Be."

The SoundLink Color pumps out music at an impressive volume. I measured more than 90 decibels, with very little distortion. That's much louder than the Mini Jambox's 80 dB and on a par with more expensive models like the $300 UE Megaboom.

Bose claims the SoundLink Color can get 8 hours of playback on a full charge, and I was able to listen for more than that. After 9 hours, the battery indicator still glowed amber; it would turn red before it ran out of juice.

However, 8 hours is less than the battery lives of other Bluetooth speakers in this size and price range. The Mini Jambox is rated for 10 hours, while the UE Boom claims 15 hours. For $50 more, you can get the Fugoo Style, which features 40 hours of playback on a charge.

The SoundLink Color paired easily with iOS and Android devices. To put it into pairing mode, you hold down the Bluetooth button until you hear the speaker say, "Ready to pair." Select Bose Color SoundLink from the list of devices on your Bluetooth Settings screen, and the speaker will tell you when it is connected.

Bose says the SoundLink Color has the standard 30-foot wireless range, and I found that to be accurate.

If sound quality matters more to you than portability and you want to pay less than $150, the Bose SoundLink Color is a great choice. With the best bass and overall sound quality in its class, this speaker will make your tunes sound their best. But beyond sound quality, you won't find much in the SoundLink Color — no ruggedness, no speakerphone and limited battery. If those features are important to you, consider the Mini Jambox or the more expensive Fugoo Style.