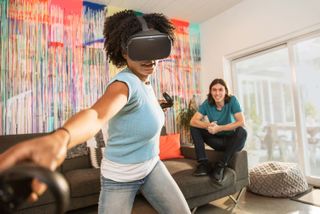 The Oculus Quest is one of the best VR headsets you can buy. The Editor's Choice headset will be available for purchase very soon, so we're crawling the Web in search of the best Oculus Quest pre-order deals.

Unfortunately, there are no sales or bundles shoppers can take advantage of right now. However, Memorial Day sales are in full swing and Amazon Prime Day is just around the corner. That means the first Oculus Quest deals may come sooner than you think. Here's where we think you'll find them.

Oculus is no stranger to deals and in the past the company has slashed the price of its VR headsets by up to $50. On Black Friday, it took $20 off its Oculus Go and $50 off the pricier Oculus Rift. Most recently, it dropped the price of its Portal and Portal+ displays by up to $100 for Mother's Day. We're predicting Oculus could lower the price of the Oculus Quest (64GB) to $379 and the Oculus Quest (128GB) to $449. That would be $20 and $50 off, respectively, which is in line with previous Oculus sales. It's just a matter of when we'll see such a sale. Father's Day and July 4th are high probabilities.

The ultimate price matcher, when Oculus lowers the prices of its headsets Amazon immediately follows suit. What're more, Amazon Prime Day is slowly approaching, so if Oculus doesn't discount its headsets in the near future, we predict Amazon will for Prime Day. Again, expect modest discounts of $20 and $50 off. Bundles are also likely. Amazon could bundle the Oculus Quest with a $50 credit or with the Oculus Quest Travel Case, a $40 value.