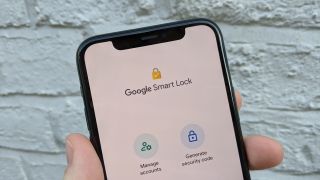 When logging into Google on a new device, iPhone users typically have to verify the log-in with an old-fashioned and not-that-secure method of two-factor authentication. But now, though, Google is allowing iPhones themselves to work as 2FA security keys.

Android users, who have had this feature on their phones since last year (if their devices run Android 7 or later), may have come across the Google Prompt pop-up on their phones when they need to sign in their Google accounts. It's more convenient and safer than having to copy a code across from a text message or voice message sent by Google, and it’s high time that iOS users got their own version of this.

Apple product owners will need to have the Google Smart Lock app downloaded on their devices. The app works on anything running iOS 10 or later (that means an iPhone 5 or a 4th-generation iPad or newer).

When you've updated to the latest version of the app (version 1.6), you can select the option to "Set up your phone's built-in security key."

The app will then take you through a short process to ensure the app can use your device's Bluetooth, since this is how the two devices communicate. It will then verify that it can send you push notifications, and of course that you're logged into Google properly on the device.

Once that's complete, if you have your iPhone within range of the device you're trying to log in on, you can open up Smart Lock when prompted to verify the sign-in attempt. You can also cancel if you've made a mistake or someone's trying to access your account without your knowledge.

Note that you can only log in on a Chrome browser (or a Chromium-based browser such as Brave), and of course you need to have Bluetooth enabled on both your phone and the second device in question.

It's a shame that you have little choice in browsers, but given how popular Chrome is, this is unlikely to be a problem for many users.