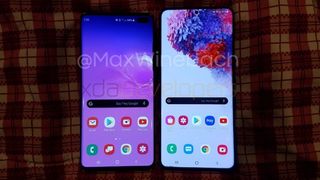 Samsung’s Galaxy S20 has been seeing lots of leaks recently, and the river of rumors isn’t dry yet. New photos and a video of the different angles of the handset have been published, and they’re (mostly) cause for excitement.

The source of these leaks is Max Weinbach of XDA Developers, who has been posting what seem like reliable leaks on the S20 for some time already. In the video (which you can watch below), we get to see a what looks like a S20 out in the wild for the first time.

The first thing you’ll see from the video is what the new phone looks like in the flesh. The front takes a design cue from the Galaxy Note 10 with its centrally aligned selfie camera cutout. Meanwhile, the back looks like the new Galaxy Note 10 Lite and Galaxy S10 Lite with its rectangular camera bump design.

We also now know the resolution for the S20 series’ display: 3200 x 1440, which makes for a Quad HD screen with an aspect ratio of 20:9. This apparently applies to all three models of the S20, even though the screen for the standard, S20 Plus and S20 Ultra handsets allegedly measure 6.4 inches, 6.7 inches and 6.9 inches respectively.

These numbers also point to a very tall and skinny handset (compare the S20 to the S10 in the image below), which should mean it's more comfortable to hold and use than a wider-bodied phone.

XDA Developers were also able to confirm that this display will be capable of a 120Hz refresh rate, but also that the screen won’t be able to display at its full resolution when in 120Hz mode. This was based on a message within the code of the settings app that displays when the user tries to select both 120Hz refresh rate and QHD, and explains that this combination isn’t possible.

This could prove to be the S20's Achilles heel depending on what rival manufacturers, notably OnePlus and its own 120Hz display, have planned for their 2020 releases. Then again, everyday users may not notice the difference in use.

Beneath that display will be another ultrasonic fingerprint scanner, as we saw on the Galaxy S10 and Galaxy Note 10 series phones in 2019. While this is only certain on the S20 Plus model, it’s likely the other phones in the range will use the same fingerprint unlocking method too.

For fans of the headphone jack, we have bad news. The beloved 3.5mm port has disappeared from the S20 Plus, which bodes ill for the other two phones in the S20 lineup. There are USB-C headphones in the box if you need them before investing in some wireless headphones, as well as a 25W fast charger.

Finally, there’s some specs information. The S20 Plus used for these leaks had 12GB RAM, 128GB storage, a Snapdragon 865 CPU and a 4,500 mAh battery. None of these are surprises if you’ve been following the leaks, but it’s good to see that the mid-range model of this new series of phones has internal components that match up to its 2020 flagship status.

It’s less than a month to Samsung’s rumored February reveal event, where we’re expecting news of this phone and the company’s new foldable, the Galaxy Z Flip. If you want to keep up to date with the latest news and leaks, our Galaxy S20 rumors page will tell you all you need to know.