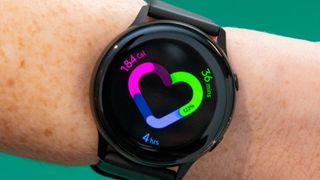 When the FCC leaked the Samsung Galaxy Watch Active 2 earlier this week, we thought we'd gotten the best glimpse at the upcoming smartwatch we would before its August 5 release.

Alas, two new press shots have surfaced on the internet, exposing all angles of the device that looks much like its Galaxy Watch Active predecessor.

One image, shared by notorious leaker @EvLeaks, provides our first look at the Under Armour edition of the Galaxy Watch Active 2. We've heard before that this Bluetooth-only model exists, but the details were unconfirmed. Now we can see the Under Armor version dons a watch face identical to the standard option, and comes with white or black silicon sports straps.

The other press photo, leaked separately by Android Headlines, shows the standard Galaxy Watch Active 2 model in all its color options. It seems the sleek watch comes in gold, silver, and black finishes.

Samsung confirmed in a press video that it will officially announce the watch Galaxy Watch Active 2 on August 5. Yesterday, the company unveiled its newest tablet, the Galaxy Tab S6, and we're expecting to see the Galaxy Note 10 Samsung's Unpacked event on August 7.

We know August 5 is just around the corner, but at this rate we'll likely see more leaks about the sports smartwatch before then. Check out our Galaxy Watch Active 2 hub for all the latest news and rumors.