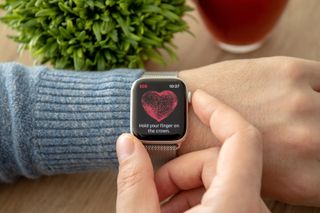 Currently, Best Buy is taking $100 off Apple Watch 4 (GPS/LTE) models with price starting at $379. It's one of the best Apple Watch sales you'll find right now.

Back in September, Apple dropped the price of the Apple Watch 3 down to $199. As a result, it's become the cheapest Apple Watch you can find.

Despite its entry-level status, the Apple Watch Series 3 is still an excellent smartwatch. You get many of the same features found in the newer models including solid fitness tracking features, a water proof design, and Apple Music streaming capabilities. The major trade-offs are that you get a slightly dated design and you don't get access to the ECG app, the electrocardiogram app which measures the electrical activity of your heart.

In terms of deals, the Apple Watch 3 (38mm/GPS) price hit an all-time low of $129 on Black Friday. It was an amazing Apple Watch deal that we likely won't see till Amazon Prime Day 2020. On major holidays, you might find it on sale for $169 or $189, but act fast because Apple Watch 3 sales don't tend to last long.

The Apple Watch everyone wants

The Editor's Choice Apple Watch Series 4 is the Apple Watch everyone wants. Although it's no longer sold by Apple, this model features larger display options (40mm and 44mm), advanced sensors (including a new accelerometer and gyroscope that can detect falls), and support for Apple's ECG app.

The new displays are more than 30% larger than the displays on the Apple Watch 3, which makes a noticeable difference. For instance, the 40mm model's OLED screen is 394x324, compared to the 38mm Series 3's 340x272 display. The larger screen makes every interaction with your Apple Watch much easier.

The Apple Watch 4 also comes with Apple's Digital Crown with haptic feedback and you can now raise your wrist and say, "Hey Siri" to summon Apple's digital assistant. Previously, you had to press the Digital Crown, which was slow to beckon Siri. The new S4 processor in the Apple Watch Series 4 is also up to 2x faster than the CPU in its predecessor.

The Apple Watch Series 5 is Apple's current-gen smartwatch. The Editor's Choice watch now sports an always-on screen that dims when it's not in use. It's a subtle change, but one that makes a big difference.

You could argue that most competing smartwatches have had this feature for years. But Apple's always-on display is different because in addition to time, it shows you up to six complications (all customizable), which can range from local weather to your daily step/fitness goals. We also like that the display's ambient light sensor can detect how bright your environment is and adjust itself accordingly, so the display is never too bright or too dark.

Apple Watch 5 sales tend to be pretty modest usually taking just $15 off the base (GPS/40mm) model. Over the holidays, the base model dropped to $355 from its $399 retail price. Outside of any major holidays, you can expect Apple Watch 5 prices to remain in the $384 range.

The best smartwatch for your outdoor runs

The Apple Watch Series 5 Nike is essentially an Apple Watch 5 with a few unique features. For starters, it has five exclusive faces that you can only get on the Nike Watch.

The Nike faces feature a non-removable Nike complications that make it easy to access the Nike Plus Run Club app. If you're an avid runner who's invested in the Nike app, it's a nice perk to owning the Apple Nike Watch.

The watch also comes with a Nike band, which is designed for better breathability and to wick away sweat while you're working out.