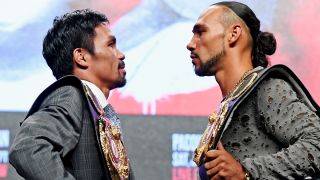 In a matter of mere hours, the Pac-Man will be back. Yes, Manny Pacquiao, widely considered one of the best fighters of all time and one of the most explosive Welterweight champions of his generation, will enter the ring. Pacquiao vs  undefeated Keith Thurman happens today (July 20), and it will decide who deserves to hold the World Welterweight Championship.

With so much anticipation around whether Pacquiao’s experience can overcome Thurman’s power and speed, you might be wondering how to live stream the fight. Fights used to typically air on ESPN, HBO, and Showtime, but after HBO ditched boxing last year and DAZN came on the scene with big checks to exclusively stream major fights, a lot has changed.

When is the Thurman Vs. Pacquiao fight? And who’s on the card?

The card for fight night kicks off at 9 p.m. ET tonight (July 20). We can’t say for sure when Pacquiao and Thurman will actually be in the ring, since there are a few fights before them that could be short or go the distance, changing the exact time the main event happens.

Either way, here’s a rundown of the fights you can expect to see this weekend:

How can I live stream Thurman Vs. Pacquiao?

Although the fights will be airing on pay-per-view on your television, you can also turn to streaming, if you’d prefer to watch the fights on your computer or set-top box.

However, in order to watch the fights, you’ll still need to pay the $74.99, plus taxes and fees, for the stream. But unlike some other sporting events, you won’t have a slew of options to watch the fights on when you want to stream.

Here’s a rundown of where you can watch the event:

Fox Sports App: The Fox Sports app is the easiest place to start if you want to watch the fights. The app is available on everything from your iPhone to Android device on mobile, and any number of devices for your television, including Apple TV, Roku, and Fire TV, among others. You can also go to FoxSports.com in the browser, if you want to watch there. The app can be downloaded for free, but again, you’ll need to pay $74.99 for the fight.

Fite TV: Fite TV is a popular app you can download to a slew of devices on mobile, in the browser, and on the set-top box of your choice. Fite TV can be downloaded for free to your device, but you’ll need to pay $74.99 for the event.

Can I watch Thurman Vs. Pacquiao on television?

Yes and no. To whet your appetite before the match card above, Fox will be airing on television at 7 p.m. ET a bout between Caleb Plant and Mike Lee for the IBF 168-pound title. After that, all of the fights above will only be available on Fox Sports PPV or via streaming options we’ll outline below.

But if you’re committed to watching the fights on your television with a cable or satellite subscription, the process is simple. You need only to head over to your PPV channels on your dial, find the fight, and buy it. The event will cost you $74.99 plus taxes and applicable fees. Once the fight starts at 9 p.m. ET, you can go to the channel and watch it live on your television or satellite service.

How do I use a VPN to live stream Thurman Vs. Pacquiao?

If you’re traveling outside the country, but don’t want to miss the big fight, a virtual private network, or VPN, could be an ideal choice. With a VPN service, you can connect to your desired streaming service through a U.S. server, which will let you access the fight as if you were at home.

Here are three VPN options worth considering should you need them to follow the fight.