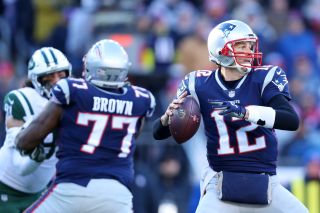 This one probably won't go well, but we'll be tuning in anyway. The New York Jets head to Gilette Stadium to have their usual divisional matchup against the New England Patriots, which will probably be a slaughter in the Pats' favor.

However, there are some compelling reasons to watch Jets vs. Patriots. Backup quarterback Trevor Siemian will continue to try to prove himself while Sam Darnold remains sidelined with mononucleosis. On the other end, we'll see a New England Patriots team without Antonio Brown, who was dropped roughly a week after he was picked up due to continued sexual assault allegations. Will the drama affect Tom Brady and co? Probably not, but we're not going to turn down an opportunity to see him sling some deep touchdown passes.

Don't have cable? Fret not. Here's your complete guide on how to watch Jets vs. Patriots online.

Jets vs. Patriots kicks off at 1pm on Sunday, September 22, and will air on CBS (so long as either New England or New York are in your local market).

How do I use a VPN to watch the game?

If you’re traveling outside the country, but don’t want to miss the game, a virtual private network, or VPN, could be an ideal choice. With a VPN service, you can connect to your desired streaming service through a U.S. server, which will let you access the game as if you were at home.

Here are three VPN options worth considering should you need them to follow the Steelers-Patriots game.

Cheap and secure, NordVPN is just $2.99/month for a three-year contract, uses 2048-bit encryption, and makes it easy to use streaming services.View Deal

Costing $6.49 per month for a one-year contract, IPVanish lets you have up to 10 simultaneous connections, and works on Mac, Windows, Android and iOS.View Deal

How do I live stream Jets vs. Patriots?

If you're in the right local market, you can catch Jets vs. Patriots on CBS. Fortunately for folks without cable, CBS is on a variety of streaming services, including Hulu with Live TV, PlayStation Vue and YouTube TV. You can also watch live CBS TV by subscribing to CBS All Access, the company's proprietary streaming service with live and original content.

If you're out of market for the Jets vs. Patriots game, you can catch the action by signing up for NFL Sunday Ticket. This service, which is available as a standalone product separate from cable, gives you access to every out-of-market Sunday afternoon game.

Here's a rundown of all of your options for live streaming Jets vs. Patriots.

fuboTV: fuboTV is a streaming service aimed at sports fans, with 30 hours of cloud DVR and support for up to three simultaneous streams. You can catch the big game as part of the service's $45 per month package.

Hulu + Live TV: Hulu's Live TV package costs $45 per month for 60 channels, including CBS. You can also record up to 50 hours of programming to Hulu's cloud DVR.View Deal