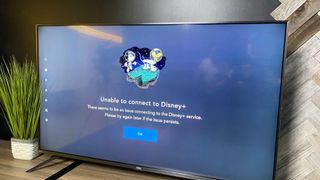 Update Tuesday, 11:25 a.m. ET: Disney Plus is up and running across all of our devices.

Those hoping to start streaming The Mandalorian on day 1 may have hit a wall trying.

Just a few hours into its launch on Tuesday morning, breakout streaming service Disney Plus suffered technical problems in the U.S. Some Twitter users reported error messages when they attempting to start watching Disney Plus content earlier today.

However, Tom's Guide found a workaround that may make at least some content on the service playable for some users.

Not the best start. #DisneyPlus pic.twitter.com/ZToB5TfcwcNovember 12, 2019

According to DownDetector, the reports began around 7 a.m. Eastern time and seemed most prominent New York City, but perhaps that's just due to the concentrated populations. Other hot spots showed up in Toronto, Montreal and Chicago.

By 10 a.m. Eastern time, Salt Lake City, Atlanta and Washington, D.C. showed outages as well, as did Amsterdam and Rotterdam in the Netherlands, the only European country to have Disney Plus so far.

The error message on users' screens read “unable to connect." The unfortunate prompt told users to exit the service and "try again."

When we first tried to connect to Disney Plus in our New York office, we too were met with the rather disappointing message.

And I OOP hi @disneyplus (on fire stick 4K) pic.twitter.com/JFreUWbsygNovember 12, 2019

Yeah... not the best start.

Luckily a tipster told us that if you can see the service's menu even with the error screen, then you can do a search for any program. If you get a search result, you can then return to a properly working home screen.

At the Tom's Guide office, this method worked with an Apple TV set-top box. But it didn't work with an Amazon Fire Stick, as there was no menu visible with that option.

Even on the Apple TV, not all the content was viewable. We were able to start watching The Mandalorian, as well as Pixar content, but the submenu for Marvel content led to an error screen.

Disney responded to this outage, tweeting that demand "has exceeded our highest expectations," and that it's "working quickly to resolve any current issues."

By 5 p.m. Eastern, Disney Plus was up and functional across all of our devices. Check out our The Mandalorian review to see how much we liked it, and if it's right for you.