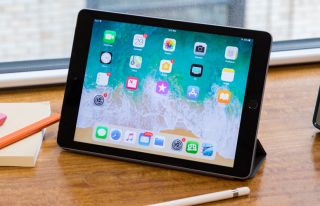 As of this moment, this tablet is out of stock but it may come back soon.

Amazon also has the 32GB iPad for $249, which is $80 off. Both of these models support the Apple Pencil and are compatible with Bluetooth keyboards.

The discount is not as steep, but the iPad Air is also on sale right now for $469, which is a savings of $30. This model starts with 64GB of storage and goes up to 256GB.

Apple iPad Air: was $499 now $469 @ Amazon
The iPad Air gives you a powerful tablet for less money than the iPad Pro. It packs Apple's blazing A12 Bionic chip and features a crisp 10.5-inch Retina Display with True Tone and wide color gamut. The tablet offers up to 10 hours of battery life. View Deal

The big differences between the iPad Air and regular iPad is that the iPad Air sports a fast A12 Bionic chip and that it has a larger 10.5 inch display. Plus, only the iPad Air is compatible with Apple's Smart Keyboard Folio.