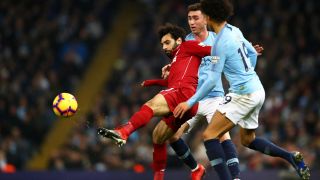 Liverpool and Man City square off again, only this time it's at Wembley. (Image credit: Clive Brunskill/Getty)

Though it may feel like the English Premier League wrapped up another season just the other day, it's been six weeks since the 2018-19 season drew to a close. In mere moments, another season of football — or soccer, as we call it on this side of the Atlantic — is about to begin, because the FA Community Shield is kicking off as you read these words.

The FA Community Shield is the traditional mark of the start of the new season, an exhibition match that pits the winner of last season's Premier League against the holders of the FA Cup. In both cases, this year, that happens to be Manchester City, which won both titles and threw in a League Cup to complete the first-ever domestic treble. For the 2019 Community Shield, then, City will face Liverpool, runners-up in the Premier League last year. They at least have another European title with which to console themselves.

With those two opponents, this year's Community Shield figures to be a compelling sneak preview of the 2019-20 Premier League season, so soccer fans won't want to miss it. Finding the broadcast in the U.S., though, could prove challenging, but don't worry: We can help you track down all the ways you can watch the Community Shield.

When can I watch the Community Shield?

The Community Shield just kicked off at 3 p.m. GMT from Wembley Stadium in London today (Aug. 4). Those on the east coast set their alarms for a 10 a.m. EDT kickoff, while West Coast footy fans woke up even earlier, at 7 a.m. PDT.

What channel is the match airing on? Can I livestream the Community Shield?

The Community Shield will be easy to find for those outside the U.S. The match airs on BT Sport in the United Kingdom and on SportsNet in Canada. Look for the Community Shield on any U.S. channels, though, and you won't be able to find it, whether you have cable TV or not.

That's because the match is airing on ESPN+, ESPN's streaming service, which the company launched in 2018 to attract cord cutters who still want to catch live sports. The $5-a-month ESPN+ service is the only place to catch the Community Shield in the U.S.; it's not included with any cable or satellite TV package or via a live-TV streaming service like PlayStation Vue or Sling TV. On the bright side, that means cord cutters who've ditched cable can watch the match, too — provided they subscribe to ESPN+.

ESPN+ for $4.99 a month
ESPN's streaming service doesn't require a cable subscription and includes a mix of live sports and original programming.View Deal

If you're a soccer fan — and we're guessing that you are if you're seeking out the Community Shield — there's a reason to subscribe to ESPN+ beyond today's match. The streaming service features a lot of soccer, including out-of-market MLS matches, Italy's Serie A league, the FA and League Cup from England, and matches from the lower divisions of English football. That's a lot of soccer for $5 a month.

ESPN+ is included as a tab in ESPN's mobile app (Android, iOS). You can also stream sports from ESPN's web page, and the app is available for set-top boxes like the Apple TV.

How can I use a VPN to livestream the Community Shield?

If you're on the road during the Community Shield, a virtual private network, or VPN, can make it seem to websites as if you're accessing the internet from your home country (or really, any location you choose). That can come in handy if you'd like to watch a local broadcast of the match.

There are a lot of services to choose from, but we've tested plenty to find the best overall VPN. We think that it's ExpressVPN, which combines excellent performance with first-rate customer service. But you've got other options if ExpressVPN doesn't meet your needs. Here are our top picks if you need a VPN to stream the Community Shield.

ExpressVPN: Speed, security and simplicity make ExpressVPN our favorite VPN service. During our tests, we saw fast connection times, and we're impressed by the service's ability to access more than 3,000 services spread out across 160 locations in 94 countries.

NordVPN: If privacy is your main concern, NordVPN is the service to choose; it uses 2084-bit encryption. It also works well with streaming services, though that's less of a concern for watching the Community Shield. Pricing starts at $2.29 if you take advantage of a special NordVPN offer.View Deal

TunnelBear: For one-off events like the Community Shield, TunnelBear may be the way to go, as its $9.99 monthly rate is comparatively low versus other services. You won't get the best performance, but it's easy enough to use, even for novices.View Deal

What to look for in the Community Shield?

This may be an exhibition match, even if they hand out a trophy at the end. But the Premier League race between Man City and Liverpool was super tight last season, so the Community Shield will give us a valuable first look at how the two sides stack up for the coming campaign. Don't expect every superstar to play the entire match; key Liverpool players such as Mohamed Salah, Sadio Mane and Roberto Firmino all had busy summers for their national teams, for example. But both sides will want to make a good impression before the start of the season.

For what it's worth, Man City is looking to win back-to-back Community Shields. The team beat Chelsea 2-0 in the 2018 edition of the match.

It'll be a tight turnaround for Liverpool before its next match. That squad begins its Premier League season on Friday (Aug. 9) at home against Norwich, while Man City's season begins the next day (Aug. 10), away at West Ham United.