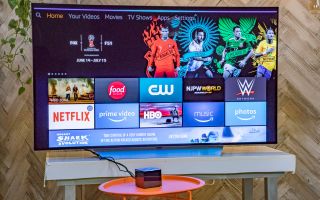 The Amazon Fire TV is a convenient way to watch streaming content on your television, but if you were hoping to pick one up, you'll have to do a little research first. After all, there isn't a single, discrete product called an Amazon Fire TV — and there hasn't been since 2014.

Here's how the Amazon Fire Cube vs. Fire Stick (in both of its configurations) shakes out:

One of the biggest differences among the three devices is how they look. The Fire TV Stick is the smallest of the bunch: a small black rectangle measuring 3.3 x 1.0 inches. The Fire TV Stick 4K keeps the same general design, but is a  bit bigger, at 4.0 x 1.2 inches. To master Amazon's cheapest Fire TV streamer, check out our guide for how to use the Fire Stick.

As the name suggests, the Fire TV Cube features a different appearance entirely: a 3.4-inch square box. All three require constant connection to a wall outlet; your TV cannot supply sufficient power for even the tiny Fire TV Stick through its USB ports.

While all three products are relatively small, it's worth considering how much space you have around your TV. If you have lots of room, a Fire TV Cube will fit just fine; if not, one of the dongles will have to suffice.

Finally, only the Fire TV Cube supports Ethernet connections out of the box. You can buy an Ethernet adapter for either the Fire TV Stick or the Fire TV Stick 4K, but it's a bit of a daisy chain. Just keep that in mind if your Wi-Fi isn't strong enough for 4K streaming (about 25 Mbps down).

The distinction probably doesn't matter a whole lot, unless you're a hard-core videophile. And Amazon could theoretically patch in Dolby Vision support with a future firmware upgrade. But for the moment, from a pure video quality perspective, the Fire TV Stick 4K is the way to go.

Like just about every Amazon gadget on the market lately, all three Fire TV Sticks feature full Alexa integration. This means that you can check the weather, manage your shopping list, look up sports scores, research traffic conditions and create impromptu playlists using only your voice. All three Fire TV models come with voice remotes, so you can start using Alexa as soon as the setup is complete.

However, the Fire TV Cube handles these features just a little bit better than its dongle counterparts. That's because in addition to being a streaming device, the Fire TV Cube is also a full-fledged Alexa speaker. That means that you can speak to it and give it commands without having to hold down a button on the remote.

Furthermore — and this is a bigger deal for people with smart-home gadgetry — that means that the Fire TV Cube can also control your lights, thermostats and other IoT devices right out of the box. The Fire TV Stick and Fire TV Stick 4K can also do this, but you have to first connect them with an Amazon Echo speaker.

MORE: What Is Amazon Prime?

Briefly, then: If you want an Alexa-enabled speaker and a streaming device, but have neither, the Fire TV Cube is your simplest solution. If you already have an Echo speaker, or don't want one, one of the Fire TV Stick variants will be fine.

If you want a fancy remote control, you're going to have to pay extra for it. The standard Amazon Fire TV Stick comes with a voice remote, but that's about the most innovative thing about it. (Old-timers may remember that when it first came out, the Fire TV Stick didn't have a microphone at all.) Otherwise, all it's got is the standard array of d-pad, confirm, play/pause, rewind, fast-forward, home, back and options buttons.

Both the Fire TV Stick 4K and the Fire TV Cube come with Amazon's upgraded Alexa remote. (Don't let the name confuse you; you can still use Alexa features with the regular voice remote.) This remote features four important buttons missing from the basic voice remote: power, volume up, volume down and mute. The Alexa remote syncs automatically with your TV, and you can use it to control the whole TV set — not just the Fire TV player.

While you could buy the Alexa remote for $30 on its own, considering that the Fire TV Stick costs $40 and the Fire TV Stick 4K $50, it's a much smarter idea to just buy the 4K stick if the remote is a big deal to you. In my own tests, I found it pretty useful.

To put it bluntly, there is almost no reason why anyone should invest in the Fire TV Stick, when the 4K variant is only $10 more and comes with a much better remote control. Not only will you be future-proofing your purchase, but you'll also have a better peripheral right off the bat.

The Fire TV Cube, on the other hand, is a bit expensive unless you specifically want Echo-like speaker functionality. If you have a smart-home setup, or want your very own digital assistant built into a versatile streaming box, the Fire TV Cube makes sense. But that's probably a limited market, especially since I imagine a lot of Amazon aficionados already have an Echo speaker, or something similar that can respond to Alexa commands.

In the battle of Fire Stick 4K vs. Fire Stick vs. Fire TV Cube, the $50 Amazon Fire TV Stick 4K represents the sensible midpoint that should work best for most viewers. It has the best balance of price and functionality.