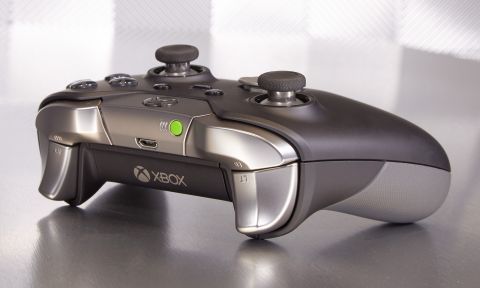 The $150 Xbox One Elite Wireless Controller lives up to the "elite" name, offering swappable components and tons of customization options, within a cozy and super-sturdy design.

I never thought I'd need a $150 Xbox controller, but Microsoft has convinced me otherwise. The sleek and sturdy Xbox One Elite Wireless Controller is a masterfully designed game pad, offering swappable components and plenty of extra inputs to help dedicated gamers dominate on either Xbox One or PC.

While the Elite's supremely comfortable design and interchangeable parts are impressive enough on their own, its myriad of software-based customization options help elevate this controller to something truly special. Despite a few small setbacks, this is the ultimate controller for any pro-level Xbox player.

You can tell Microsoft's premium Xbox One controller lives up to its "elite" moniker as soon as you hold the device. The game pad's black body and silver shoulder buttons create a decidedly more sophisticated look than that of the standard Xbox One pad, with only a few subtle hints of green peppered throughout.

The Elite's button layout is nearly identical to that of a regular Xbox One pad, though the face buttons are now all black, and the d-pad, thumb stick shafts and optional paddles are all made of sturdy stainless steel.

The game pad sports a switch in the middle for changing profiles, and, just like pads on the latest Xbox One, features a 3.5mm headset jack at the bottom as well as a port for using any headset adapters.

While the Elite looks great, it feels even better. The front of the pad is coated in an ultracozy layer of soft-touch material, with textured, gray-colored grips on the handles to keep your fingers in place.

Weighing roughly 12.3 ounces with its default parts attached, the Elite felt satisfyingly hefty, without weighing my hands down. The game pad is noticeably heavier than the standard 8-ounce Xbox One controller, as well as Razer's similarly premium $150 Wildcat, which weighs 9.2 ounces.

Packing a wide range of swappable parts, the Elite Wireless Controller is easy to customize to your heart's content. The pad includes three sets of thumb sticks; the tall and short variations have the same rigid, rubber edges found on the regular Xbox One pad, while the domed sticks are smoother and more rounded.

There are two d-pads: a satellite-shaped "faceted" pad that lets you better pinpoint specific directions, as well as a standard, cross-shaped one. The controller also includes four optional paddles that you can attach to the rear, which can be mapped to virtually any button to help keep your thumbs glued to the thumb sticks.

All of the Elite's modular parts attach magnetically, and swapping them out is a breeze. You're free to combine them any way you like; for example, when playing shooters, I used the tall thumb stick on the left for better travel when moving, and the short stick on the right for precise aiming.

To keep your Elite safe, Microsoft includes a sturdy carrying case that both houses the controller and provides slots for neatly storing each individual part. Also included is a 9-foot micro USB cable for using the Elite on your PC or plugging it into your Xbox once the batteries have died.

That brings me to my one major gripe: Despite costing a whopping $150, the Elite Wireless Controller, like the standard Xbox One pad, still runs on disposable AA batteries. If you want to be able to recharge it, you'll have to purchase Microsoft's $25 Play and Charge kit separately. This might not be an issue for pro gamers who swear by wired connections, but considering that the default PS4 controller (which costs only $60) has a rechargeable battery by default, it's disappointing to see Microsoft launch a high-end Xbox pad without one.

The Elite Wireless Controller won't turn you into a pro gamer overnight, but after testing it with Halo 5: Guardians, Gears of War: Ultimate Edition, Forza Motorsport 6 and Killer Instinct, I found that it has the potential to up your game in almost every genre.

If there's a single feature that justifies buying an Elite, it's the controller's hair-trigger locks. With a flip of a switch, you can lower the travel on both the left and right triggers, making it much easier to fire rapidly in shooting games. Popping alien heads off in Halo 5 felt vastly more immediate and satisfying with the trigger locks on, and I don't want to go back to playing shooters without having this feature handy.

I was on the fence about the Elite's rear-facing paddles at first; sure, they add extra control options, but they can get in the way of your fingers and are pretty easy to press by accident. However, once I used them while playing Gears of War (with a button layout provided by Microsoft), I can confidently say they're a game changer.

With running, weapon-switching and melee attacks all accessible from my middle and ring fingers, I was able to keep my thumbs on the sticks and better focus on navigating the battlefield. I had to retrain some muscle memory, but this setup made the game's sometimes-clunky controls feel incredibly smooth. Many top-level Gears players use a special "Claw" grip that lets you run and aim at the same time by pressing the face buttons with your pointer finger; with the Elite's paddles, you can enjoy the same convenience while holding the controller like a human being.

The paddles also proved intuitive for sprinting and tossing grenades in Halo, as well as manually switching gears in Forza. I still generally prefer to keep the paddles off in order to rest my fingers comfortably on the grips, but the paddles' ability to give you easier access to key actions is huge, especially in shooters.

I was eager to see how the Elite's new dish-shaped d-pad would assist me in pulling off flashy combos in fighting games, but it didn't quite live up to my expectations. The faceted d-pad is designed to help you better pinpoint specific directions, but I had to press on it slowly and forcefully to feel its extra points of articulation. That doesn't do much good when you're actually midmatch and have to move quickly.

The new d-pad is very comfortable, and I was still able to execute my usual combos more often than not in games such as Killer Instinct and Ultra Street Fighter IV. However, while the Elite's standard, cross-shaped d-pad felt small and stiff by comparison, I found that I was able to pull off special moves just a bit more consistently on it. That's an important difference in games where a missed attack can mean death.

The only other parts I often kept off my Elite were the supersmooth, domed thumb sticks. While they feel nice, I found them too slippery for my tastes, leading me to stick with the more-rigid, tall and short variations.

The Elite's physical customization options are just the tip of the iceberg.

Using the Xbox Accessories app on Xbox One or Windows 10, you can not only reassign almost any of the controller's inputs, but also fine-tune the way the thumb sticks and triggers work, to a ridiculous degree.

Creating a custom controller config is easy, and you can save up to 255 of them. To remap a button, you can simply hold it down and then press the button you'd like it to mimic. If you want to go really in depth, you can adjust the level of rumble on each individual trigger and grip, as well as set very specific sensitivity levels for the thumb sticks and triggers. I can see shooting and racing fanatics getting plenty of use out of this feature. Heck, you can even choose how brightly the controller's Xbox button lights up.

The app also has a handful of pre-made button configs designed for games such as Halo 5, Gears of War and Forza 6, and Microsoft plans to roll out more as new games launch. I found many of the presets useful, and as I mentioned above, the Gears preset proved game changing.

You can load two profiles onto the Elite at once, and switching between them is as instant as flipping the switch in the center of the game pad. This is especially useful if you, say, have separate profiles for shooting and piloting vehicles in Halo.

It's worth noting that the Xbox Accessories app will work with regular Xbox One pads, but you'll be limited to button mapping. If you want to customize sensitivity and rumble levels, you'll need an Elite.

While I mainly used the Elite on Xbox One, it worked just as well when plugged into my PC. The game pad is compatible with Windows 7 and up, and, like any Xbox controller, allows you to plug and play without manually downloading any drivers.

The Elite isn't the only controller out there for high-level Xbox One competitors. The $150 Razer Wildcat shares some of the Elite's features, such as trigger locks and optional extra inputs, but doesn't have swappable thumb sticks or d-pads. One advantage the Wildcat has is built-in audio controls for muting the mic or changing sound profiles, something you typically have to buy a separate Xbox One audio adapter for.

Those who want to ultrapersonalize their pad can check out Scuf Gaming's Infinity ($120 to $160 depending on configuration), which offers a ton of thumb-stick, button and grip options at the point of purchase. Perhaps not coincidentally, Scuf recently became the exclusive third-party accessories partner for Microsoft's Elite Controller. This means you'll likely be able to eventually purchase Scuf's myriad of multicolored, multisized controller components for your Elite.

After about a week with the $150 Xbox One Elite Controller, I'm not sure I can go back to my plain old plastic pad. This controller lives up to its name in every way possible, offering supreme comfort and durability, as well as enough customization options to please just about any type of serious gamer. Plus, with new components and game profiles planned for the future, this already impressive peripheral has plenty of room to grow.

Of course, buying a $150 controller isn't going to magically make you better at games, and casual gamers are probably better off paying $60 for Microsoft's still-excellent standard Xbox One pad. The Elite would benefit from better d-pads and a rechargeable battery, but overall, if you're a competitive gamer looking for the ultimate combination of comfort and personalization, Microsoft's premium pad is well worth the investment.