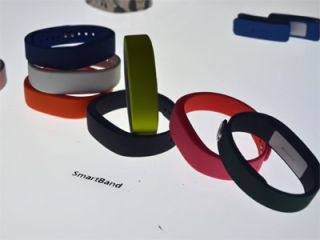 Those eager to get their hands on Sony's recently announced SmartBand fitness tracker won't have to wait much longer. Sony has just announced that the wrist-worn gadget and its accompanying LifeLog app will launch globally in March.

Announced at CES 2014, the SmartBand is powered by Sony's Core module. This is a tiny component that houses the device's accelerometer and pedometer. The Core is removable so that SmartBand owners can wear it as a pendant as well.

MORE:Best Fitness Apps to Help You Shape Up

The water-resistant SmartBand also works in conjunction with Sony's LifeLog app, which is designed to keep track of your everyday activities. In addition to measuring how far you've run and monitoring your sleep patterns, the LifeLog app uses your location and app activity to keep tabs on your habits. Sony says that the SmartBand and LifeLog app will launch in 60 markets around the world when it debuts next month.

Sony is among the several smartphone makers jumping on the fitness tech bandwagon.LG and Huawei recently unveiled their own fitness trackers and CES and Mobile World Congress 2014 as well.  We're expecting to learn more about the SmartBand, Core and LifeLog app as March approaches.