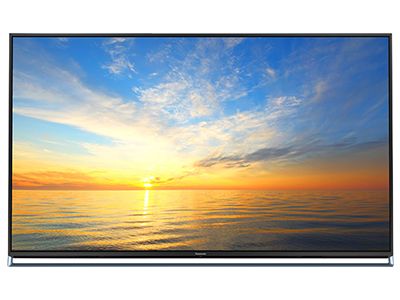 The Panasonic 65AX800U can't match the quality of Panasonic's now-defunct plasma TV lines, but it delivers a pleasant 4K performance.

Who it's for: The Panasonic Viera TC-65AX800U is for anyone who highly values true, accurate cinematic color in video.

Panasonic's claim to big-screen TV fame has traditionally rested on its plasma sets. Like other TV makers, Panasonic has left the business, but the company is still focused on achieving cinema-quality colors. It largely succeeds with the 65-inch Panasonic Viera TC-65AX800U (about $2,200 online). However, the set sacrifices some picture details due to middling contrast.

The Panasonic TC-65AX800U presents a slim profile, at just under two inches thick — if it weren't for the set's unusual pedestal stand. It comprises two elements, a long, two-inch-high front chrome bar that extends the length of the screen and a nearly 40-pound square counterweight that clamps onto the back. The rear ballast piece extends roughly 14 inches behind the set, preventing it from being pushed back flush against a wall, and the low-slung front bar prevents owners from squeezing even the thinnest sound bar or sound stand under the set.

During our tests, the TC-65AX800U's stand caused some other problems. The set weighs roughly 90 pounds, and while the stand is supposed to hold it up, its mass was leaning too far forward, causing some flexing of the chrome bar below the screen. We also saw buckling around metal trim around the edge of the screen. When we asked Panasonic about the problem, we got an official answer, "That was due to damage incurred during use by the previous reviewer. It is not a normal issue with the TV."

MORE: Best TVs for Any Budget

One rather nice design feature is a pop-up, fixed-focus 1080p video camera. It comes up automatically at the top of the screen when you choose to use Panasonic's facial-recognition service or sign on to Skype.

The fact that the video camera pops back down into the chassis when you're not using one of these services should allay fears about hackers watching you sitting in your PJs in the living room.

The smart TV includes built-in Wi-Fi (802.11 a/b/g/n) for accessing online services and the usual raft of ports and connections. There are four HDMI inputs, but only one is compatible with HDCP 2.2 (High-bandwidth Digital Content Protection) and can handle 4K/60 Hz content (most current content is still at 30 fps).

There's also a DisplayPort jack for an additional 4K (or HD) digital source, such as a PC. In addition, there's an RF coaxial plug, component/composite video inputs, optical digital and stereo analog audio outputs, plus three USB ports, an SD card slot and an Ethernet port.

The two main strengths of the Panasonic TC-65AX800U are its color fidelity and seamless upscaling. In terms of color accuracy, the set is virtually perfect at reproducing the current standard color gamut (known as Rec. 709) that most programming adheres to. But the TC-65AX800U is also one of the best we've tested at meeting the much-wider color range established by movie studios for cinemas.

The visual results are noticeable. Watching the Blu-ray Disc of Gravity, I chose THX Bright Room as the optimal preset mode for most environments and programming (THX Cinema is better for dark, nighttime viewing). Color fidelity was excellent. Gold reflective panels on the space shuttle and the satellites looked saturated and realistic, and Sandra Bullock's skin tone looked healthy (until she started hyperventilating).

By comparison, in its best mode the (roughly $1,900) Vizio P-Series P652ui-B2 (see review) washed out the crinkled gold reflections, and Ms. Bullock's face looked ashen most of the time. Better color fidelity on the Panasonic set also meant that oceans looked more aquamarine, compared with the cooler, more bluish hues on other sets such as the Vizio model.

Also impressive was the Panasonic TC-65AX800U's upscaling of HD and standard-definition material to 4K resolution. I saw no skewing or blurring of stars in the scenes from Gravity, for example. The Blu-ray of Skyfall also suffered no ill effects. Rapid chase scenes, in which objects can momentarily disappear if the video processing is too aggressive, were handled with aplomb by the TC-65AX800U. Even a DVD of the same movie failed to throw off the Panasonic's balance. Colors still looked rich, and there were no excessive jagged edges that can appear along the sides of objects on-screen due to upscaling.

Nevertheless, contrast issues kept the Panasonic TC-65AX800U from delivering a perfect picture. In the THX Bright Room mode, with Black Level set to Dark, colors were richer but details disappeared in the shadows, such as the folds in George Clooney's space suit. In the opening scene of Skyfall, the dark areas of the hallway and living room remained hidden. On other TVs, such as the full-array Vizio P-Series P652ui-B2, one can see the outlines of doors and curtains that are lost in the Panasonic image.

With the THX Bright Room mode's Black Level set to its default Light, stars that were missing behind Sandra Bullocks floating suit (the Milky Way) reappeared. Unfortunately, both black-level settings represented something of a compromise. The TC-65AX800U already has issues rendering deep blacks, due to the edge-lit design. Black screens and bars above and below letterboxed content tend to look gray. With the Black Level set to Light, space looked more gray than black.

Gamers should take note that the Panasonic Viera TC-65AX800U had one of the best image-response times in our tests — just 72 milliseconds. It means that in game mode, there's also no delay in getting the picture to the screen, so serious players won't be a disadvantage in competitions.

Interface: Long in the Tooth

Panasonic has more experience than other TV manufacturers with online services. In the TC-65AX800U, it has updated some of its smart TV features by offering a customizable screen called My Home Cloud that combines inputs, apps and family and friend connections all onto one screen. You can include a calendar, live TV PiP (picture in picture) and favorite apps on the screen, for example.

The TC-65AX800U certainly has a full set of smart TV features, including a Web browser and apps for YouTube, Netflix, Hulu Plus, Vudu and Skype. There's also support for Pandora, Rhapsody and TuneIn music apps and also a raft of casual games, such as BlackJack and Bubble Crash. The usual social networking apps — Facebook, Twitter and Picasa — are also supported.

Nevertheless, the TC-65AX800U still looks as though it's midway through an upgrade. Settings menus are nicely displayed in a left-side vertical menu, but the grid layout for the apps market and services like the media player could use some sprucing up. A better graphical presentation would help buyers appreciate that Panasonic has one of the more extensive collections of apps available in a smart TV.

The TC-65AX800U comes with two remote controls. One is a large, traditional wand-style infrared model with easy-to-read oversized keys and a dedicated Netflix button. Boomers will appreciate the larger number keys; on the downside, the remote is not backlit for using in dark rooms. There are still some confusing moves when you're using the remote with the smart TV features. For example, the return button can jump to different menu levels, depending on what screen you're on: In one case, it went back to inputs from the video app screen, rather than going just one level back to the main app screen.

The alternate remote is virtually keyless and features a touchpad. It uses Bluetooth, so it has to be paired to the set, but it doesn't require line-of-site to an IR receiver. Once it was paired, I found the remote's system of swipes and taps instantly familiar. It also wisely keeps dedicated volume and channel up/down buttons. And it worked well controlling a PlayStation 4 in our setup.

The TC-65AX800U's audio output was balanced but lacked gusto. Its two 4-watt drivers and one 10-watt woofer don't produce very high volume levels. It can get loud enough to fill the average living room, but if you've got a larger home theater, you'll need to supplement this set with a sound bar or surround-sound system.

While I was auditioning the audio features, Queen's Bohemian Rhapsody sounded muted, although the music was relatively well-rounded. Metallica's Enter Sandman and The Eagles' Hotel California lacked punchy percussion, however. You can adjust the audio, including using presets for Standard, Music, Ambience and user-defined settings. The one sonic strength of the Panasonic TC-65AX800C is that there's no appreciable distortion even when it's at maximum volume.

If you're looking to Panasonic for an LCD TV that can replace the beloved plasma screens of yesterday, the TC-65AX800U ($2,200) is not that set. However, it does reasonably well in the 4K category. There are trade-offs in terms of picture quality choices that have been made — color fidelity over contrast — and the idiosyncratic stand is a negative if you plan to put this 65-inch set on a table.

Those on a tighter budget should consider the Vizio P-Series P652ui-B2 instead, as it offers better contrast, a more intuitive interface and better remote for $1,000 less than the Panasonic — albeit with less accurate color. In the same price range, the Samsung HU8550F ($1,999 to $2,500 online) offers excellent color reproduction along with a svelte design. But for most viewing — especially upscaled content — the Panasonic TC-65AX800U offers enough features to rank it as a good performer.

John R. Quain has been reviewing and testing video and audio equipment for more than 20 years. He is currently a contributor to The New York Times and the CBS News television program. Follow him @jqontech.