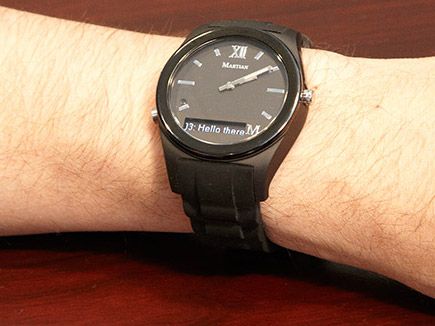 The Martian Notifier is an affordable smartwatch that forgos gee-whiz features for straightforward alerts and a unique vibration system.

Just call it the anti-Galaxy Gear. Whereas pricey smartwatches from Samsung, Sony and Pebble offer dozens of custom apps and, in some cases, cameras and microphones, Martian Watch's Martian Notifier is a watch first, and smart device second. The timepiece keeps things simple by vibrating and showing alerts on a 12-character scrolling-text display that sits quietly underneath its analog face and hands. At $129, the Martian Notifier is significantly less expensive than its competitors, and with a near single-minded focus on alerts, it's also simpler to use. But is less really more when you're purchasing a smartwatch?

Like its big brother, the Martian Voice Command watch, the Notifier pairs an old-fashioned analog face with a small, scrolling, monochrome OLED display at its bottom and an indicator light. The light turns blue when you receive an alert, green it's when charging and red when it's running low on power. Available in white, black or red, the watch looks like a traditional watch with physical hour and minute hands, along with line markers for the hours.

The Martian Notifier's conservative aesthetic reminded us of a Timex or Citizen watch, which may seem a little plain to some users. Our black version of the watch came with a staid, silicone, black band, but Martian will sell 22mm replacement bands in a variety of colors, including sunny yellow, quasar blue, Venus pink, cosmic orange and, our favorite, astro teal. The $20 "Quick Change" bands are supposed to pop in and out without the use of tools, but we did not get to test this.

The $129 COOKOO watch, which is also an analog smartwatch, has a more fashion-forward, Swatch-like aesthetic with colorful hands and hour markings, along with a tasteful second hand.

Two buttons sit on the Martian Notifier's left side: a bottom button that activates the menu, and a top button that launches your phone's voice assistant or selects a menu item when you're in the menu. The right side houses a standard crown dial for changing the time and, behind a compartment, a microUSB port for charging. Unfortunately, the Notifier requires a special USB connector that's just a little longer than a standard microUSB. That means if you lose the wire that comes with it, you'll need to get a $12 replacement from Martian Watch.

Setting up the Martian Notifier was a fast and simple process. After installing the Martian Notifier app from the Google Play store (there's also a version for iOS), we enabled pairing mode on the watch by tapping the bottom button a couple of times to get to its setup menu and then the top button once to check "Android." We then tapped the "Start up connection" button in the app and were prompted to scan for the watch and pair it, which we did successfully.

The Martian Notifier app has a simple interface with six different tabs: Home, Setup, Repeater, Alarms, Alerts and Help. The Home tab allows you to pair the watch, set the vibration intensity or enter Do Not Disturb mode. The Setup tab lets you choose a language, set a date format and control the scroll delay for the watch's OLED panel. The Display tab provides options for displaying the current weather and the time on the watch.

The Repeater tab lets you create a vibration alarm that runs every hour during specific times of the day. For example, you can be reminded to get up from your desk and exercise, take medicine or do other periodic tasks. The Help tab provides documentation for the watch.

The Notifier app's Alarms tab allows you to set silent alarms, which cause the watch to vibrate at designated times. Martian says this feature is ideal for couples: If one partner has to wake up earlier than the other, you can set the watch so it buzzes the wearer's wrist without making noise. The Notifier app also lets you designate an alarm as "dismiss from phone," which keeps groggy users from just hitting a button on their watches and going back to sleep.

In our tests, the Martian Notifier's silent alarm worked flawlessly, vibrating on schedule in a way that was just annoying enough to make it impossible to ignore. Though we can't imagine wearing a watch to bed, others will find this feature helpful for waking up. We could see ourselves using this watch to make sure we perform a task or attend an appointment during the day.

The Martian Notifier's main feature is its ability to vibrate and display brief notifications from your favorite apps. Unlike any other smartwatch we've seen, the Notifier allows custom vibration patterns based on apps. You can set up to four different vibrations per app, with each vibration as a long vibration, short vibration or pause.

The Notifier app's Alerts tab has entries for a few popular apps (Facebook, Twitter, Google+, Gmail, Calls, SMS messages), with a button that lets you see a complete list of every app you've installed and assign vibration patterns to them. We set Gmail to alert us with two short vibrations while our work email client notified us with two long buzzes.

We found that the different buzz patterns made it easy to tell which type of service was notifying us, but we wish the alerts themselves had a bit more detail. The watch's OLED display shows just the sender and subject line for emails and a similarly limited amount of information for Facebook and Twitter.

To be fair, the Martian Notifier app is simply relaying the same text that all of these services display in the Android notification drawer. However, the Pebble and Sony Smartwatch 2 show the text of email messages or social media updates, making it easier to decide whether you need to reach for your phone and respond. The COOKOO watch provides even less detail than the Notifier. That watch's status lights (e.g., an envelope for email) light up when you get messages but don't show any content at all.

Notifications scroll across the Notifier’s 12-character LED screen like stock prices on a ticker. The scrolling speed seemed just perfect for reading, neither too quick nor annoyingly slow. The notifications don't appear until 2 seconds after your wrist buzzes, which gave us more than enough time to rotate our wrist and get ready to read. If that delay is too long or short, you can configure it in the Martian Notifier app.

If you miss a notification, you can double tap on the glass face to repeat it — something we found ourselves doing on several occasions when we were too busy to look at our wrist. You can also see and navigate through the 10 most recent alerts by hitting both watch buttons at once and then scrolling up or down by hitting the top or bottom one. While we found this feature helpful, we had to be very deliberate in our double button press. Several times, we ended up turning off the watch by accident, as long-pressing the bottom button on its own powers down the watch. Martian said that this problem occurred because we were testing a preproduction unit and that final versions will be more responsive to the double button press.

Pressing the top button on the Martian Notifier launches your phone's voice assistant app. If you have an iPhone, that assistant is Siri, and with Android phones, it's Google Now. Martian's other Voice Command watch uses its built-in speaker and microphone to interact with your phone, but the Notifier relies on your phone's own speaker and microphone. Fortunately, the mic on our Galaxy Note 3 was strong enough to hear our voice accurately while the phone was in our pocket, and we were able to hear it perfectly. However, if the answer to our question was a set of search results, rather than a text-to-speech reply, we obviously had to look at the phone.

Phone Locator and Other Features

Like most smartwatches, the Martian Notifier can help you find your phone or alert you when you walk too far away from it. The Find My Phone feature, which we activated from the watch's menu, worked flawlessly, causing our phone to play a few musical notes, which helped us find it in our couch cushions.

We also found the watch was quick to alert us when we strayed too far from our phone. After walking over 20 feet away from our Galaxy Note 3, the watch alerted us within 4 seconds that it had lost its connection. That leash feature could be invaluable if your phone slips out of your pocket. However, if you drop it in a cab or bus, the vehicle may have already pulled away before the watch gets disconnected.

The Martian Notifier also sports a Flashlight feature that causes its LED indicator to turn white and stay lit until you turn it off. While not as bright as a phone screen, this small light is intense enough to see small objects such as a keyhole in the dark. The Do Not Disturb mode allows you to temporarily stop all notifications on the watch. If you've configured weather or a world clock in the app, that information is available on the watch menu (launched with the bottom button).

There's also a camera mode, which will shoot a photo on your phone with a press of the button on the watch. The camera on our Galaxy Note 3 was highly responsive in our tests; this feature could be extremely useful for taking selfies if you have a method for propping up your phone somewhere.

Unlike most other smartwatches, which can't even tell the time when they run out of power, the Martian Notifier will keep ticking for up to two years, even when it doesn't have enough juice to get notifications. The analog watch part of the Notifier has its own lithium battery that operates independently of the power source for the OLED display, Bluetooth radio and other smartwatch components. Martian claims that the smartwatch portion will last four to five days on a charge. Based on our tests, this estimate seems accurate. The watch lasted more than four days for us, though for some of that time, it was in Do Not Disturb mode.

If you're looking for a smartwatch with its own set of apps, a built-in camera, a microphone or a full-color digital display, the Martian Notifier is not the device for you. The $299 Samsung Gear 2 has a microphone and camera, and the $149 Pebble has a rich ecosystem of apps. Martian's $299 Voice Command watch is also a more robust option, as it sports a powerful speaker and mic. However, if you want an elegant and affordable wrist companion that's a watch first and alert center second, the $129 Martian Notifier is a good choice.