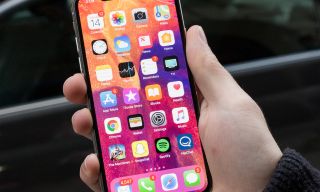 There's been a lot of debate over exactly how successful the iPhone X has been since its launch last year. On the one hand, it was one of the best-selling smartphones in December 2017 worldwide, according to data tracked by Kantar Worldpanel. And yet other reports point to Apple slashing production in half for the early part of this year, citing sluggish sales. So is it a hit or a flop?

Based on Apple's fiscal first-quarter results, the company's overall iPhone sales are flat year over year, but the iPhone X has been a standout. "iPhone X surpassed our expectations and has been our top-selling iPhone every week since it shipped in November,” said Tim Cook, Apple’s CEO in a press release.

Turns out, the most important question isn't how the iPhone X has sold, at least not for smartphone shoppers. A more critical concern is whether Apple makes the best phone and whether you should buy it. And the answers are "yes" and "yes." Here's why.

It's ironic that chief Apple rival Samsung makes the OLED panel for the iPhone X. But based on our testing and side-by-side screen comparisons with other phones, Apple's 5.8-inch Super Retina screen on the iPhone X is tops.

The colors are vibrant but also highly accurate, and the display looks brighter and offers wider viewing angles than the other top flagships.

In our camera face-off between the iPhone X and  the Pixel 2, Google's phone was neck and neck with Apple's flagship and actually beat it in low light. But the dual rear cameras on the iPhone X offer more natural-looking portraits and its colors were truer and brighter in some cases.

At least for now, the iPhone X is our top camera phone. Check back once the Galaxy S9 ships.

It's nice that phone makers are working to integrate the fingerprint reader into the screen, but what happens when you have crumb, sweat or grease on your fingers? You're going to run into the same issues that plague today's sensors. With the iPhone X's Face ID, you just stare at your phone and swipe up. And it looks like it's going to take a while for other companies to catch up to Apple's TrueDepth camera and machine-learning techniques.

4. It's the Fastest Phone

Granted, the same A11 Bionic chip powers the iPhone 8 and iPhone 8 Plus, but I'd rather pair the blazing speed of this processor with a much better looking display and design.

On both real-world tests and synthetic benchmarks, the iPhone X is miles ahead of all Android phones. And even though the Snapdragon 845 chip should close the gap when it starts appearing in new phones, leaked results point to Apple having a comfortable lead for a while.

With the exception of one prominent early bug that prevented users from operating the iPhone X in cold weather (which Apple has since  addressed with an update), there hasn't been many major complaints about Apple's flagship. Compare that to a handset like the Pixel 2, which seemingly had a new bug discovered every week in the first couple months after launch. As Vlad Savov writes for The Verge, "The absence of outrage and complaint about the iPhone X, especially in our present era where taking offense seems like the best way to be heard, is in itself a huge accomplishment for Apple."

To be fair, iOS 11 has had its fair share of problems, including security issues. But Apple has been responsive with timely updates.

At $999, the iPhone X is definitely not for everyone. And it's also not perfect. With the absence of a home button, the gestures take some getting used to. And the notch at the top of the display can be an eyesore when you're using apps with a white background. But overall, Apple deserves credit for crafting a 10th-anniversary device that continues to live up to the hype.