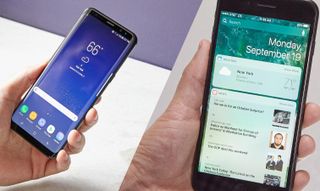 Star Wars versus Star Trek. Marvel versus DC. Creamy peanut butter versus chunky. Some debates will rage on through time. And Paul Stark has just pressed the Resume button on a classic tech back-and-forth in our forums.

Ah, the ol' Android versus iPhone argument, a debate that's been raging since the first device running Google's OS debuted in 2008. Paul's question seems a good opportunity to explore this conundrum from the perspective of someone mulling over a smartphone purchase: What type of phone should you get — an Android device or an iPhone?

Paul notes one of the more compelling reasons to cast your lot with Android, but there are others.

Android is very customizable. Because Google built the Android OS to be open, you can tweak and fine-tune your phone as much or as little as you want. That includes picking out a new launcher that adds new capabilities to your phone, adding a performance booster or making any one of a number of tweaks that are simply out of the question for iPhone owners. Heck, it's easy enough to turn either a Galaxy S8 or an LG G6 into a stock Android device without any rooting. Android is a tinkerer's dream.

There's a wider — and welcome — variety of Android devices. Apple's idea of giving users a choice of phones is to take last year's model and knock $100 off the price. The least expensive iPhone you can get will still set you back $400, and I say that as a satisfied iPhone SE owner.

With Android, variety is the spice of life. If your budget allows it, you can opt for feature-packed flagships like the HTC U11 or the aforementioned Galaxy S8 and G6. Don't want to spend more than $600 on a phone? You can find plenty of lower-priced options that still offer compelling features, whether it's the all-day battery life of the Asus ZenFone 3 Zoom, the dual-lens rear cameras on ZTE's Blade V8 Pro or the budget-friendly features on the Moto G5 Plus.

Some of Android's built-in features really shine. Apple's Maps app has improved since it limped out of the gate with iOS 6, but Google's Maps has more polish. The arrival of Google Assistant on iOS has given me more hands-on time with that digital assistant. And honestly, the only reason I still use Siri is that I can summon Apple's digital helper without unlocking my iPhone. Android users have a much better built-in assistant.

That's the case in favor of Android, but there are several reasons no one's managed to pry the iPhone out my grasp over the last decade.

Where the iPhone Wins

Apple provides the most seamless experience. Say what you will about the merits of an open OS, but there's something to be said for controlling both the hardware and the software. (I have a feeling owners of the Google Pixel would agree.) By making both the device and the operating system that runs on it, Apple can guarantee a pretty consistent experience to anyone who fires up an iPhone.

That extends to the Mac (if you have one), as I can move work between devices using Handoff, set up a Universal Clipboard to copy and paste content from my iPhone onto my Mac, or field phone calls from either device. And I've never had to spend a minute of my life removing carrier bloatware from my iPhone.

iPhones get more reliable security and software updates. As of this writing, only 9 percent of the many Android phones out there in the world are running Nougat, the latest version of Google's OS. That compares to 86 percent of iPhones and iPads running iOS 10. The reason? Updating your version of iOS is as simple as going into the Software Updates section of the Settings app and downloading the update. Android updates have to go through device makers and carriers, which move on their own schedule.

This has implications on the security of your phone as it gets older. As my colleague and security editor Paul Wagenseil points out, you can hold onto an old iPhone for up to five years and still have a secure device so long as you keep downloading those software updates. An Android device might stop getting updates in as little as 18 months, and Google stops updating the security on its phones after three years.

iPhones still enjoy an app edge. Google Play has grown by leaps and bounds over the years, and it's now larger than Apple's App Store. But the iPhone still enjoys an edge in apps, thanks in large part to the fact that developers make more money building iOS apps. There's a reason why big apps like Super Mario World and Monument Valley 2 launched on iOS before coming to Android.

Sound Off: Now it's your turn

What makes Android versus iOS such a great debate is that even though I just rattled off several reasons in favor of either platform, you can probably offer up several reasons more. I'd love to hear about them in the forums, and I'm sure someone trying to decide what kind of phone to get would enjoy hearing them, too.