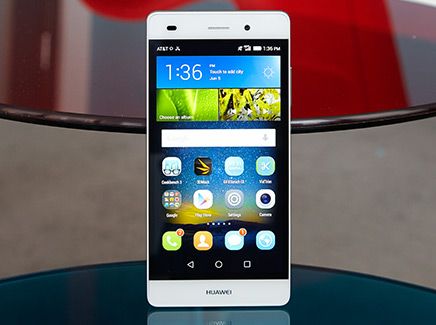 A robust camera and dual SIM card slots make the affordable P8 Lite worth a look, but the device is outclassed by similarly priced, unlocked Android phones.

There's a burgeoning market for unlocked phones among shoppers who want quality handsets without spending flagship bucks. The Huawei P8 Lite joins the fray with a 5-inch display, 13-megapixel camera and dual SIM card slots, all for a very reasonable $249. However, with a lower-resolution screen and slower processor than its competitors, the P8 Lite can't quite carry its weight.

Not surprisingly, the Huawei P8 Lite looks like a smaller, less expensive version of the P8, the company's more-premium 5.5-inch smartphone. Instead of a metal back, the P8 Lite is made of plastic, with a white, brushed finish. I like the very thin side bezels, just 0.11 inches, as well as the overall thinness of 0.3 inches. That's thicker than the 0.25-inch P8, but at 5.6 x 2.8 inches and weighing 4.76 ounces, it was still easy to hold this phone in one hand.

Best Reasons to Buy It

Overall, I liked the photos I took with the P8 Lite. Its rear camera uses a 13-MP Sony BSI sensor with an f/2.2 aperture

The phone accurately captured the Empire State Building and the blue sky, but an all-black Restoration Hardware facade in the foreground came out too dark, and skin tones of passersby were all over the place.

In a shot of a pot of flowers in front of a fountain, details were crisp, but purple petals looked flat, and the pink flowers were washed out by the sun.

Indoors, the P8 Lite's camera did a good job adjusting for the ambient lighting. In photos taken of fish in an ice case, the camera was able to neutralize the pinkish lighting without losing too much in terms of accuracy. Crab legs and wild-caught salmon lost some of their reddishness, but overall looked close to the real thing.

HDR mode did an admirable job accounting for light and dark areas, such as in the Empire State photo, but took about 2-3 seconds to process.

The All Focus mode lets you change what part of the image is in focus, by taking several shots in quick succession and combining them. This was evident when I took a picture of a flower in the foreground and the Empire State Building in the background. As I was taking the shot, a truck passed in front of me. After taking the shot, when I looked at the image and focused on the flower, the truck was in the left third of the frame. When I focused on the skyscraper, the truck had moved more toward the center of the image. Still, the feature works well.

Like the P8, the Lite's camera has a Beauty mode, which softens your features.

The front 5-MP CMOS camera has an 88-degree, wide-angle lens, which makes the camera more useful when you're taking group selfies (groupies?) or are on a group chat. Colors were accurate, and I could easily fit two of my colleagues in the frame, but there was a good deal of speckling and visual noise.

The P8 Lite features two SIM card slots, one of which can accommodate a microSD card, supporting up to 32GB of storage. Both SIM card slots support 4G LTE on all U.S. GSM bands. In other words, you can easily use this phone on AT&T, T-Mobile, Cricket or MetroPCS.

Huawei's Emotion UI (EMUI 3.0) adds some nice touches, such as grouping all Google apps in a single folder. I also liked that the notifications drop-down listed items in a time line, so you know when you received, say, a text message or phone call. Notifications are also actionable; for example, you can archive or reply to emails, or return a phone call or send the caller a message.

You Can Pay in Installments

If the P8 Lite's $249 price is too much for you to pay up front, Huawei will also offer 3-, 6- and 12-month installment plans though Affirm, a lending agency founded in 2013 by PayPal co-founder Max Levchin. As with any credit card, Affirm charges an annual percentage rate (APR), which can vary from 10 percent to 30 percent, based on your credit score and other factors.

Best Reasons to Skip It

The P8 Lite runs Android 4.4.4 KitKat, a generation behind Lollipop. That means you don't get features such as notifications on the lock screen, battery-saver mode, Do Not Disturb or expanded Google Now functionality.

Powered by a 1.5-GHz Snapdragon octa-core 615 processor, the P8 Lite was relatively fast. Opening the camera took about 1.5 seconds, which isn't blazing, but still reasonably quick. My Porsche zoomed around the track smoothly in Real Racing 3; the pre-race animation was slightly choppy, though.

Typically, the "lite" version of anything — be it beer, soda or FM radio — indicates that the product has fewer calories or lower fat, but all too often, is code for a watered-down version of the real thing. Such is the case with the Huawei P8 Lite. This smaller, less expensive version of the P8 has a capable camera and dual SIM card slots, but a lower-resolution display and way-below-average battery life make this device much less of a bargain than similarly priced, unlocked smartphones.

For the same $249 price, the OnePlus One and OneTouch Idol 3 have larger and sharper displays and much better endurance. If you're willing to pay $50 more, the Asus Zenfone 2 offers much swifter performance. So we'd leave this Lite off your list.