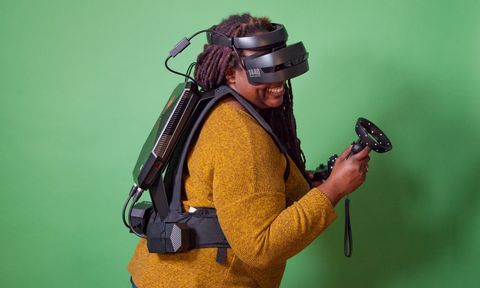 I love the idea of virtual-reality backpacks. You're instantly transported somewhere far from your living room, free to walk, jump or punch your way through a game without worrying about tripping over a wire or accidentally toppling an expensive computer. When the fun's over, though, it’s typically a hassle trying to use ungainly systems like these for regular productivity tasks and traditional gaming.

Enter the HP Omen X Compact Desktop PC P1000-010. At $2,499, the system is small and stylish enough to sit on your desk, doubling as both a showpiece and a powerful gaming desktop. But when it's time to put on that VR headset, you can strap the P1000 onto your back via a backpack harness with several batteries, allowing you to play in the virtual space, unimpeded by pesky wires.

HP has been paying a lot more attention to design with its recent products like the HP Omen 15 and 17, and it shows. It's kept the red-and-black gamer motif and the large Voodoo emblem (that's front and center on the desktop and the sides of the dock). But instead of harsh angles and lights for the sake of being edgy, HP went for a sexy, sophisticated look. And it really works here.

The P1000 has the shape of a oblong octagon, which is split into two distinct designs. The top and bottom along the front of the device are made of smooth plastic, while the sides are perforated with small triangles, which make an intricate design and double as ventilation. Four customizable backlit LED lights and a glowing blood-red Voodoo emblem at the top separate the machine's four quadrants. Bright-red lettering at the bottom spells out "Omen."

Once I strapped the P1000 on my back, I felt powerful and ready to kick some virtual ass.

Outside of the pronounced slats and notches, the rear of the desktop is made of blank, black plastic.

When you're not wearing the P1000, the desktop resides in a pretty snazzy docking station made primarily of black plastic with a blood-red base. A carbon-fiber triangle centered on the front and back of the device gives it some pizzazz. On the top left corner, you'll find a large Eject button that, when pressed, releases the desktop from its dock.

So Many Freakin' Ports

Between the P1000 and its dock, there’s plenty of room to plug in your precious peripherals. Along the top of the desktop sits a pair of USB 3.0 ports, a USB Type-C port, an HDMI 2.0 port, a Mini DisplayPort, a headset jack and a power output for the HTC Vive.

Toward the bottom right of the device, you'll find two more USB 3.0 ports and an AC input on the left. There are also two connectors for the stand-alone battery packs when you strap on the backpack.

But the ports don't stop there. There's still the matter of the docking station, which has a pair of USB 3.0 ports and a USB Type-C port on the front.

The rear has a more robust offering, including three USB 3.0 ports, a full DisplayPort, an HDMI port, a gigabyte Ethernet port, a secure lock slot, an AC input to power the dock and a DC output to charge the batteries in their separate charging station.

Once I placed the P1000 on my back, complete with two of the swappable batteries, I found it was lighter than wearing my regular backpack — although to be fair, that’s currently housing a 15-inch MacBook Pro, several Scuf Gaming controllers, a few Moleskine notebooks, various portable chargers and a fair amount of bric-a-brac. After adjusting the straps, I went on to wear the backpack for about an hour without feeling any discomfort or getting tired.

I also let one of my colleagues try it on, Kenneth was surprised with how light the setup was. He did note that it’s difficult to jump while wearing the contraption. Thankfully, there aren't a lot of games that require  leaping.

Plug and play. That's it — at least if you're using one of Microsoft's Mixed Reality headsets like the HP Windows Mixed Reality Headset V1000-100, and you have a display emulator dongle to bypass not being connected to a monitor. If you have those things, you just have to plug the headset into the waiting USB 3.0 and HDMI ports, and go.

If you're using a Rift or a Vive, you'll have to connect to a monitor for a few setup features, including sensor placement and configuration, before you can start perambulating in virtual environments.

Once I strapped the P1000 on my back, I felt powerful and ready to kick some virtual ass. I look like the Rocketeer 2017, and I love it!

I started my VR tour with the HP V1000, cued up Ghostbusters VR: Now Hiring, and got to work assembling my proton pack and touring the firehouse. But the real fun starts when it's time to bust some ghosts. Thanks to the shorter quick-change cable, I don''t have to worry about a long wire whipping me in my back as I dart from side to side, trying to avoid Slimer's viscous green ectoplasm.

When you're not wearing the P1000, the desktop resides in a pretty snazzy docking station made primarily of black plastic with a blood-red base.

When I switched to the Oculus Rift and Space Pirate Trainer, I really got a workout moving through my play space, dodging and blocking enemy fire with my shield while doling out a variety of laser beams in retaliation.

Since Space Pirate Trainer is a little on the athletic side, I really appreciated not having to worry about the cables. Normally, I would have to reposition myself and the cables several times with a game like this, or else restrict my movements so I don't accidentally yank the cord and knock over the laptop or desktop I'm connected to. With the P1000, movement in the game was just effortless. If I needed to dodge, I got low, or if I needed to spin quickly to the left, I did so without a care.

For how small the P1000 is, I'm amazed that HP managed to squeeze in an Nvidia GeForce GTX 1080 GPU with 8GB of VRAM into a relatively tiny chassis. That basically gave me carte blanche to crank up all the settings in my games.

As I reached the New Orleans' stage in Wolfenstein II: The New Colossus, I dove into a murky moat to avoid a patrol of Nazi soldiers. I was unsuccessful, as bullets cut a path through the brackish water at 68 frames per second (fps) on Very High at 1920 x 1080, barely missing me. I lowered the graphics settings to High before I scrambled out of the water, wielding dual machine guns, and perforating one of the enemies' chests, sending him to the ground in a growing pool of blood at 74 fps.

During the Hitman test, the P1000 achieved 93 fps, surpassing the 91-fps desktop average. Unfortunately, it wasn't enough to overcome the VR One, Chronos or Corsair One, which hit 95, 128 and 129 fps, respectively.

When we ran the SteamVR Performance test to check for its level of virtual-reality readiness, it scored off the charts with an 11, matching the scores of the Chronos and Corsair One, while beating the 10.4 average. The VR One was slightly behind at 10.3.

Outfitted with an overclockable 2.9-GHz Intel Core i7-7820HK processor and 16GB RAM, the P1000 is ready and able to get to work, when you're done meandering in virtual space. I watched a Twitch stream in Google Chrome after opening 20 other tabs and had no latency issues.

Despite the souped-up specs, the P1000 had some issues keeping pace with the competition. For example, it scored only 14,626 on Geekbench 4, a synthetic overall performance test. That's well below the 18,259 desktop average. To be fair, however, the P1000 is using a mobile processor, while many other systems in this category are outfitted with desktop CPUs. Still, the VR One, which has its own Core i7-7820HK CPU, managed to deliver 15,143, while the Corsair One and its Core i7-700K processor hit 17,755. Equipped with an AMD Ryzen 7 1800X processor, the Chronos produced an impressive 21,585.

The P1000 lasted 3 hours and 30 minutes with two fully charged batteries. That's much shorter than the VR One's time of 5:14.

According to HP, the P1000's 8-cell external batteries can last up to 1 hour each on a charge. After an hour of playing through several rounds of The Unspoken and Space Pirate Trainer, I had nearly drained the first battery.

On our less taxing battery test, which consists of continuous web surfing over Wi-Fi, the backpack lasted 3 hours and 30 minutes with two fully charged batteries. That's much shorter than the VR One's time of 5:14.

At its core, the P1000 is a gaming desktop and as such, it comes preloaded with a few helpful utilities aimed at providing the best gaming experience by way of the Omen Command Center. You can customize the lighting of the five available zones, assigning them one of 16 colors, which is a nice aesthetic touch.

The Network Booster allows you to prioritize Wi-Fi or Ethernet bandwidth so your chosen games and apps get top priority. And if you want to squeeze more performance out of the system, there's the Overclock tab that will allow you to tweak the CPU and GPU via a set of sliders. The utility will benchmark the new settings before you apply it so you don't inadvertently crash the desktop

There are a few pieces of bloatware, courtesy of Windows 10, including Netflix, Plex, Keeper and one-year trial of Dropbox with 25GB of storage.

To date, the HP Omen X Compact Desktop PC P1000-010 is the best option for people searching for a tetherless VR solution for PC. It's lightweight yet powerful, and surprisingly comfortable to wear over long periods of time. And while the VR experience is great, the $2,499 machine works equally well as a desktop. Thanks to its dock, you can reasonably use the P1000 for work and traditional gaming — something its competitors are capable of, but which is logistically difficult due to their lack of a dock.

If you're not concerned with having a dock and are looking for a cheaper alternative, the MSI VR One is available starting at $1,744. However, you'll get an Nvidia GeForce GTX 1060 GPU instead of the beefy GTX 1080 inside the P1000. In fact, MSI only offers up to a GTX 1070. Overall, the HP Omen X Compact Desktop PC P1000-10 is the VR backpack for virtual-reality enthusiasts looking for a tether-free solution that seamlessly transitions from desktop to backpack.