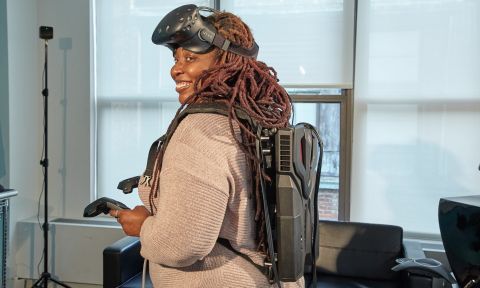 The MSI VR One allows you to cut the cord on the HTC Vive for an immersive free-moving virtual-reality experience.

We cut the cords on our phones, cable boxes and headphones — so why not do the same for our virtual-reality headsets? Until recently, if you wanted to use the HTC Vive, you had to be tethered to a PC. But MSI has stepped in to remedy that problem by introducing the MSI VR One (starting at $1,999; reviewed at $2,299), a backpack that's essentially a gaming PC without the backbreaking weight. With the headset plugged into the backpack and all the wires neatly tucked out of the way, the VR One delivers an absolutely liberating VR experience.

However, with Intel, Google, Microsoft and Oculus working on powerful mobile VR headsets that are just as, if not more, powerful than the HTC Vive and the Oculus Rift, the MSI VR One's days could be numbered.

I'm not going to lie: Wearing the VR One makes me feel like a Ghostbuster or The Avengers' Falcon, and not in a dorky way. MSI made this potentially goofy-looking piece of hardware into something undeniably badass. Relying on a typical red-and-black "gamer" color scheme, most of the backpack's frame is constructed from matte black plastic with red metal mesh cutouts for air intake.

MSI's red-and-white dragon logo sits regally at the top center of the device, whose big, sweeping curves are both aggressive and elegant.

But my favorite thing about the front is the strip housing the power button and battery indicator lights; the segmented arrowhead design just really draws the eye. On each side of the device, you'll find a hot-swappable battery pack that can be detached or reattached with the sliding lock and release switches.

The back of the VR One is made from a textured black plastic with some funky circular design etched in. A black plastic spine of sorts sits directly above the pack, which cradled my back and added some space between my rear and the hot air being cycled through the system.

The VR One ships with a pair of backpack straps that snap into hinges at the top and bottom of the system. Made from tough black nylon, the straps are wide for better weight distribution and have a belt that snaps across the midsection to make sure everything stays in place.

The VR One has just enough ports to support your HTC Vive and function like a regular desktop. Along the top of the device sit four USB 3.0 ports, a Thunderbolt 3 port, HDMI, a mini DisplayPort, mic and headphone inputs, and the power jack for a VR headset.

Along the bottom, you'll find another power port to refill the VR One's battery packs. I wish MSI could have fit a full DisplayPort onto the pack. It was a pain trying to hunt down a mini-DP-to-full-DP cord when I needed to connect the rig to a display.

Sorry, modders; the RAM is the only component you can swap out on the VR One, so you'll have to stick with whatever configuration you decide to purchase.

Outside of positioning the Vive's pair of base stations, setting up the HTC Vive with the VR One isn't that much different from configuring it on a regular desktop. After connecting the system to a monitor, I downloaded the necessary software, plugged in the Vive and ran through room setup. Once that was finished, I disconnected the DisplayPort cable, strapped in and put on the headset. All in all, the process took about 20 minutes.

For an 8-pound system, the VR One feels seriously light. Thanks to the wide, adjustable straps, I easily slung the system onto my back and was instantly ready to rock and roll. I didn't feel any back strain or other ill effects even after wearing the system for nearly 3 hours.

My only real concern during that time was tripping over the 16.4-foot Vive cable that connects to the backpack. The knowledge that I was a misstep away from an impromptu meeting between the floor and my face prevented me from being totally immersed, initially. However, once I started crawling through randomly generated air vents in Unseen Diplomacy, I through all caution to the wind.

During my second go-round with the backpack, I figured out that I could wrap the Vive's cables around the center of the rear frame, and that's when I really got footloose and fancy-free. MSI also packages a pair of connector cables for the HTC Link, which is considerably shorter than those packaged originally.

Walking in a VR Wonderland

The VR One's Nvidia GeForce GTX 1070 GPU is a refreshing step up in power and performance from the entry-level GTX 1060 GPU.

The backpack hit 10.3 on the SteamVR performance test, which places it in the Very High quadrant of the test and beats the 10.2 gaming-desktop average. However, it fell just short of the Dell XPS Tower Special Edition (Nvidia GeForce GTX 1070 GPU), which scored 10.7, as well as the GTX 1080 GPU-powered Lenovo Y900, Digital Storm Vanquish 5 and Alienware Aurora, all of which notched 11.

But numbers can't properly convey what it's like walking around freely in virtual reality. In a word, it's glorious. Free from potentially falling flat on my face, running into a couch or accidentally yanking the cords, I could move in my VR environment with complete confidence.

My newfound freedoms translated into deeper lunges when I was dodging shots in Pirate Space Trainer. I accomplished the frantic jumping and ducking needed to make the high score in Doomsday Survival: Training and felt downright graceful. And through it all, the VR One's powerful GPU and CPU made sure to keep the action at a steady 90 frames per second, so I didn't encounter any simulation sickness.

If you have a spare monitor lying around, you can use the VR One as a gaming PC that can hold its own against more traditional gaming rigs. The backpack churned out 52 fps on the Rise of the Tomb Raider benchmark at 1080p on Very High, dusting both the category average (45 fps) and the XPS Tower SE (43 fps) but not the Vanquish 5 (68 fps).

The VR One also polished off the Hitman benchmark (1080p on Very High) hitting 95 fps, beating the 83-fps gaming-desktop average. The Y900 and XPS Tower SE cranked out 70 fps and 71 fps, respectively, but the Vanquish 5 held on to the lead, at 116 fps.

The VR One's 2.7-GHz Intel Core i7-6820HK processor with 16GB of RAM is no slouch. I launched 20 tabs in Google Chrome while downloading a game. From there, I started playing Rise of the Tomb Raider on High at 1080p and saw no sign of latency.

Equipped with a 512GB NVMe PCI-e solid-state drive, the VR One achieved a rather speedy 363.5 megabytes per second on the File Transfer Test (duplicating 4.97GB of multimedia files), decimating the 197.5-MBps average.

MSI claims that once you start meandering around in virtual reality, each of the eight-cell batteries will last 1 hour and 30 minutes on a charge. And because they're hot-swappable, you can switch them out without turning off the system. You will, however, have to slip out of the pack to make the switch.

I played several rounds of Arizona Sunshine, Immersive Combat, Fruit Ninja VR and Unseen Diplomacy, which took about an hour, and that left the battery at 31 percent. If you had to use the system as a regular PC sans power brick, it would last 5 hours and 14 minutes, according to the Laptop Mag Battery Test (continuous web surfing over Wi-Fi).

Despite its primary purpose as a VR machine, MSI added some software extras to the VR One back page, including Facebook, Twitter, Skype, Netflix and Music Maker Jam. There are some more useful apps, such MSI Burn Recovery  (in case the system crashes) and MSI Battery Calibration (to ensure your batteries are running at optimal performance).

MSI Dragon Center lets you check out system diagnostics, and Nvidia GeForce Experience and Killer Networking are preinstalled. Keep in mind that, to access any of these apps, you'll have to connect the VR One to a monitor.

The MSI VR One backpack has a two-year limited warranty.

The MSI VR One is a fun pit stop on the way to true mobile VR solutions that provide equivalent, but hopefully better, virtual-reality experiences than what we currently have. It's lightweight and comfortable enough to wear for hours at a time, which works well with the hot-swappable batteries. Thanks to the powerful Intel Core i7 processor and Nvidia GTX 1070 GPU, you can use the VR One as a regular desktop machine, provided you have a monitor. And its armor-like design makes you feel like a superhero.

As fun as it is to wear and use the VR One, at $2,299, I don't envision anyone but the most die-hard HTC Vive owners investing in it. However, I would love for some enterprising person to buy a few of these and open up a VR arcade (pretty please). Overall, the MSI VR One is a compelling choice for VR enthusiasts looking to cut the cord on the HTC Vive.