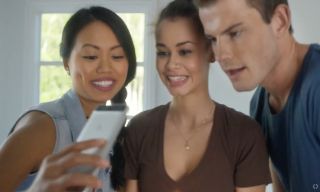 Created as a FaceTime competitor, Google’s Duo app lets you video call your contacts regardless of spotty network speeds, switching between cellular and Wi-Fi networks. "Cool, cool," I thought while watching the search giant's product announcement, "I can chat with Mom from wherever I am and she can see that I'm safe, sound and relatively happy." But when the company unveiled the Knock Knock feature, things went decidedly left.

Knock Knock is essentially a live video preview, which means you get to see the other person before you even answer the call. And while Google was selling the puppies-and-rainbows version of its usage, the NJ/NY-cynic in me immediately thought -- "Great, another way for some rando to share an unsolicited moving image of his junk."

And while my train of thought might seem farfetched, it's a plausible scenario. Whether it's a drunk, late-night "WYD" call from an ex or current fling or some weirdo you gave your number to because he wouldn't take no for answer, the threat of unwanted body parts looms large. One wrong move and bam!, this call is suddenly X-rated.

If that's not enough, theoretically, you don't even need to have your digital flasher's number. As long as they have yours, they can reach out and scar someone for life. At least with Google Hangouts, you get a black screen before you click. Knock Knock is just balls-out blatant. And honestly, I don't need a flash of someone's errant body part in "crisp HD video (up to 720p). But maybe that's just me.

MORE: How to Reduce Data Usage on Your Smartphone

Don't get me wrong, an unexpected naughty pic can be fun. But this video version of sliding in my DMs is doing way too much. Google conveniently left out the logistics of how Knock Knock works and I have several questions. Can I disable the feature? Can I block a number from sending a preview? Is it possible to catch a screenshot of this conversation or record video?  If so, is there a notification to warn someone that they're being recorded?

At the end of the day, I'm all for new technology, but Google is going to have to lay out the ground rules way before summer settles in. Just like you can currently submit Nazi and other less than appropriate N-words to the Name Android N website, Duo and Knock Knock are opening people up for some close encounters of the Chatroulette kind.

In order to protect your eyes from something unsavory, here are some easy steps to disable the Knock Knock feature.

4. Toggle Knock Knock to off.