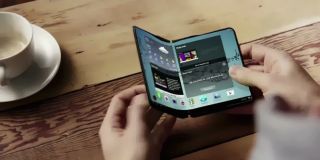 Samsung has confirmed that it's working on a Galaxy X foldable smartphone that the company says, won't be a "gimmick." But exactly how it will work is unknown.

The tech giant has been awarded a design patent on a new foldout smartphone design, according to Patently Mobile and SamMobile, which earlier reported on the news. The technology describes a method by which the smartphone would have a wraparound screen and would typically remain closed. When you want to use it, you simply open it and fold out the screen to reveal a smartphone with a larger display surface area.

Samsung has said that it's working on a foldable smartphone it will likely call the Galaxy X. But the company hasn't revealed in which way the smartphone could fold.

Most reports have suggested that the smartphone would fold up when you're done using it or have no need for the larger screen. Some other reports have said that Samsung's handset will have a standard screen that can be extended to a tablet size whenever you need it.

Samsung, of course, isn't revealing exact plans. Instead, the company has confirmed that it's working on a new handset that it will launch sometime this year. It's also confirmed that the smartphone will have a foldable design.

There are some other interesting tidbits in the patent. For one, it appears to come with physical buttons around the screen, suggesting Samsung's handset might have rather large bezels. Some side buttons are also visible, where you'd likely turn it off and on and control volume. And since it's a foldout design, it appears to be rather thick when the screen is closed.

Still, it's impossible to know whether a foldout Galaxy X is actually in the works. Like other prominent tech companies, Samsung files for patents all the time. And although it sometimes brings those patented technologies to the market, it often times does not.

Luckily, we won't need to wait long to find out: Samsung has already said it's launching the Galaxy X this year.