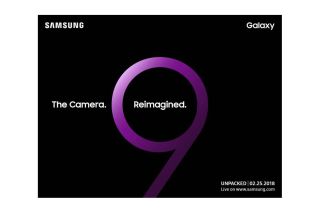 If you're eager to see what Samsung has planned for its next flagship smartphone, circle February 25 on your calendar. That's when the electronics giant will hold an Unpacked press event where it's expected to take the wraps off the Galaxy S9.

Invitations for the Unpacked 2018 event on Feb. 25 in Barcelona don't mention the Galaxy S9 by name. But they do feature the number 9 prominently. And Samsung mobile chief DJ Koh has already confirmed that the company would announce its new phone at Mobile World Congress, which kicks off in Barcelona a day after this newly scheduled press conference.

Samsung's invitation even offers a clue as to what to expect from the Galaxy S9. The invitation reads, "The camera. Reimagined," all but confirming where Samsung is putting its focus on with this phone.

Previous leaks about the S9's specs suggest the new phone will feature a Super Speed Dual Pixel camera with a 12-megapixel resolution that's expected to capture images more quickly than other smartphone shooters. The S9 camera's also expected to offer two different apertures — f/1.5 and f/2.4 — with the phone switching between the two apertures depending on conditions. The f/1.5 aperture would activate in low-light settings while the f/2.4 would give the S9 a wider depth of field.

A second phone likely to be unveiled Feb. 25, the Galaxy S9+, is expected to feature a second rear lens, matching the dual camera setup Samsung introduced with the Note 8 phablet last year.

A recent leak from Samsung disclosed a 3-stack FRS camera that many now assume is slated for the S9. This camera would be able to record slow-motion video at 480 frames per second in 1080p resolution. In addition, a Super Phase Detection autofocus feature would determine distance to moving objects, automatically adjusting lighting controls for improved autofocus.

Other expected Galaxy S9 highlights include a Snapdragon 845 processor (at least for the U.S.-bound version of the phone), a repositioned fingerprint sensor and improved speakers. For the most part, this year's models are expected to look an awful lot like the Galaxy S8 and S8+ introduced last year, so Samsung would seem wise to emphasize camera improvements if that's where the biggest changes are taking place.

While we now know when Samsung's unveiling the Galaxy S9, we still don't know officially when the phone might arrive in users' hands. A popular rumor has presales beginning March 1, which would be the Thursday after Samsung's press event. Under this rumor the phone would hit retail shelves by March 16, or a little less than two weeks after it's unveiled in Barcelona.