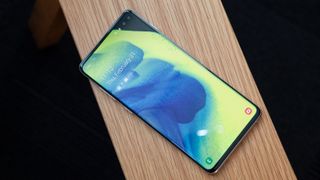 That ultrasonic fingerprint sensor beneath the screen of the new Galaxy S10 is a pretty impressive feature, letting you easily unlock the phone while freeing up more screen real estate that would previously be taken up by a button. Just make sure the glass around the sensor doesn't crack, or the fingerprint sensor could be put out of commission.

That's the takeaway from a Galaxy S10 durability video posted by JerryRigEverything on YouTube, in which Samsung's latest phone is put through bend, scratch and burn tests to see how well it holds up.

The answer, for the most part, is pretty well. In the bend, the S10 doesn't flex and the glass doesn't separate, suggesting a pretty durable phone. The burn test features a lighter being held up to the S10's display for 30 seconds, and while a white marker begins to appear on the screen, it goes away once the flame is removed.

Even the scratch test yields some pretty reassuring results for Galaxy S10 owners. It takes a level-6 pick to leave scratches on the display, while a level-7 pick creates deeper grooves. The glass cover over the S10's assorted camera lens doesn't scratch at all.

It's the test in the area of the S10's fingerprint sensor that's likely to garner the most attention though. When the screen over the sensor is attacked with a level-7 pick, leaving more scratches than you're likely to ever see on a phone, the fingerprint sensor still works. It's only when a level-8 pick is used to simulate cracks in the glass around the sensor that it becomes unresponsive.

The conclusion? Normal scratches on your S10's screen seem unlikely to affect the fingerprint sensors, but major cracks are more problematic. You could still unlock the phone in other ways — the video shows the phone being unlocked by drawing a pattern on the screen even after the glass around the sensor's been scratched to hell — but that's unlikely to make you feel any better about one of the marquee features on your $899 phone going kaput.

As durable as the S10 may be — and this video does suggest that it takes a lot of damage to put the fingerprint sensor out of commission — you're still going to want to look into getting a Galaxy S10 case that offers some protection against unexpected drops that could potentially shatter the display.

Tom's Guide is planning our own durability testing for the Galaxy S10 to see how well Samsung's phone holds up to drops. Stay tuned.