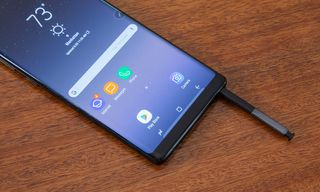 Samsung's planning some important updates for the Galaxy Note 9. And nearly all of them center on something bigger.

But that's not all. Serial leaker Ice Universe, who is often right about Samsung rumors, revealed recently that Samsung is planning to bundle up to 512GB of storage in the Galaxy Note 9. That, coupled with a microSD card, could push the smartphone's total storage to 1TB.

Ice Universe, whose comments were earlier reported on by Forbes, also says that Samsung is upping the Galaxy Note 9's battery size. While there had been some debate over whether the Galaxy Note 9 would come with a much larger battery than the Galaxy S9 Plus' 3,500mAh battery pack or the same, Ice Universe says Samsung will go with a 4,000mAh pack. That would make the Galaxy Note 9 the first Samsung smartphone to ship with such a gigantic battery.

Not to be outdone, Samsung is also planning to up the RAM in its Galaxy Note 9 from 6GB previously to 8GB this time around, according to the report. And just in case that wasn't enough, Samsung is also increasing the size on its front-facing camera to have a much larger sensor, Forbes is reporting. The news outlet didn't reveal the camera's specs.

Samsung has been quiet about its plans for the Galaxy Note 9, but has confirmed it's coming. Several reports had suggested that Samsung could opt for a July launch, but now it's believed the company will unveil and release the smartphone in August.

In addition to the aforementioned features, look for the Galaxy Note 9 to ship with the Qualcomm Snapdragon 845 and have horizontally aligned dual cameras on the back. Aside from a slightly larger screen, Samsung's smartphone is expected to ship with Bixby 2.0, a new and improved version of Samsung's AI assistant.

However, the Note 9 isn't expected to come with a different design, so if you're hoping for a new look and feel, this won't be the smartphone for you.