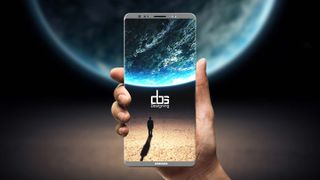 Samsung's upcoming Galaxy Note 8 is the star of yet another leaked render. And once again, it looks like the device will take its design cues from the Galaxy S8.

The folks over at SlashLeaks have published a render of what they say is the Galaxy Note 8. The device in the image isn't turned on, so it's impossible to see how far the bezels extend around the screen, but the phone appears to have curved edges like the Galaxy S8 and Galaxy S8+. It also looks like Samsung has ditched the physical home button on the Note 8, allowing for the screen to nearly entirely cover the face.

Of course, this is nothing new. A slew of leaks and renders have hit the Web in the last several weeks and nearly all of them have shown a Note 8 with the same design as Samsung's Galaxy S8, including curved edges and the elimination of the physical home button.

According to rumors about the Note 8, Samsung is planning a 6.3-inch display for the phone, making it slightly larger than the 6.2-inch Galaxy S8+. Reporting on the SlashLeaks render, The Inquirer suggests the Note 8 will adopt a 19.5:9 aspect ratio, a change from the 18.5:9 ratio that the S8 features. The change would theoretically make the Note 8 easier to hold in one hand even with a wider screen.

Other reports on Samsung's upcoming device claim the Note 8 will run on Qualcomm's Snapdragon 835 processor and offer the same Android-based software experience as in the Galaxy S8. Like its predecessor, the Galaxy Note 8 isn't expected to come with a virtual fingerprint sensor. Instead, the company is expected to place the fingerprint sensor on the back of the device near its rear-facing cameras.

Speaking of those cameras, they might just prove to be the biggest difference between Samsung's Galaxy Note 8 and the Galaxy S8. Unlike the Galaxy S8, the Galaxy Note 8 is expected to ship with dual rear-facing lenses, making it the first smartphone from Samsung to offer the feature.

Samsung could announce the Galaxy Note 8 as soon as next month, though some rumors say the phone won't arrive until September. There's no word on pricing, though at least one report suggests a $900 starting point for the phone.